Vertigo Records is a record company that originated in the United Kingdom. It was a subsidiary of the Philips/Phonogram record label, launched in 1969 to specialise in progressive rock and other non-mainstream musical styles. [2] Today it is operated by Universal Music Germany, [1] and the UK catalogue was folded into Mercury Records, which was absorbed in 2013 by Virgin EMI Records, which was renamed back to EMI Records in June 2020. [3]

Vertigo was the brainchild of Olav Wyper [2] when he was Creative Director at Phonogram. It was launched as a competitor to labels such as Harvest (a prog subsidiary of EMI) and Deram (Decca). It was the home to bands such as Colosseum, Jade Warrior, Affinity, Ben and other bands from 'the "cutting edge" of the early-'70s British prog-folk-post-psych circuit'. The first Vertigo releases came with a black and white spiral label, [4] which was replaced with Roger Dean's spaceship design in 1973.[ citation needed ] Vertigo later became the European home to various hard rock bands signed to Mercury in North America, such as Bon Jovi, Rush and Kiss.

Vertigo is a division of Republic Records in the United States and operates as EMI Records in the UK, which in turn is a frontline music group operation of Universal Music UK. Island Records manages Vertigo's North American back catalogue that was once distributed by Mercury. In France, Vertigo France existed as a sub-label of Universal Music France's Barclay Records until 2014, when it was renamed as Island France. In Germany, Vertigo has merged with Capitol Records and is mainly used for German rock artists, and is named Vertigo/Capitol (notable contract exception here is Lewis Capaldi, he comes from UK). The label's legacy artists include Metallica (outside the US and Canada), Razorlight, Rush (Europe) and Dire Straits (except the US). More recent signings include The Rapture, The Killers (UK/Ireland), One Night Only, Amy Macdonald, Noisettes and Thee Unstrung between 2004-2005 and Kassidy in 2009. Black Sabbath returned to the label in 2013 (including the US and Canada for the first time via sister label Republic) until their dissolution in 2017 although former sister label Sanctuary Records Group acquired international rights to their back catalogue in the interim (the band were last on Vertigo in 1987).

Vertigo/Capitol (formerly Vertigo Berlin) is today the only active Vertigo label in the Universal Music Group. Artists signed to Vertigo/Capitol are Rammstein, Chvrches, Herbert Grönemeyer, Andreas Bourani, Haim, AnnenMayKantereit, Gzuz, Volbeat or Sportfreunde Stiller. [5] Unheilig's sixth studio album Große Freiheit became one of the most successful albums in Germany of all time and sold 2 million albums. The collaboration album Palmen aus Plastik 2 by the rapper Bonez MC and RAF Camora stayed for 58 weeks at the German charts and was the first album to have 8 songs in the top 10 single charts in the release week. Shirin David's debut album Supersize was the first album by a female hip hop artist to chart at #1. [6] Also international artists like Lana Del Rey, [7] Dua Lipa, [8] Sigrid or Scottish singer Lewis Capaldi [9] launched their careers on Vertigo.

Capitol Records is an American record label owned by Universal Music Group through its Capitol Music Group imprint. It was founded as the first west coast-based record label of note in the United States in 1942 by Johnny Mercer, Buddy DeSylva, and Glenn E. Wallichs. Capitol was acquired by British music conglomerate EMI as its North American subsidiary in 1955. EMI was acquired by Universal Music Group in 2012 and was merged with the company a year later, making Capitol and the Capitol Music Group both a part of UMG. The label's circular headquarters building is a recognized landmark of Hollywood, California. Capitol is well known as the U.S. record label of the Beatles, especially during the years of Beatlemania in America from 1964 to 1967.

Chrysalis Records is a British record label that was founded in 1968. The name was both a reference to the pupal stage of a butterfly and a combination of its founders' names, Chris Wright and Terry Ellis. It started as the Ellis-Wright Agency.

EMI Records Ltd. is a British record label owned by Universal Music Group. The original EMI Records was founded by the music company of the same name in 1972 as its flagship label, and launched in January 1973 as the successor to its Columbia and Parlophone record labels. The label was later launched worldwide. It has a branch in India called "EMI Records India", run by director Mohit Suri. In 2014, Universal Music Japan revived the label in Japan after the rebranding of Nayutawave Records as EMI Records. In June 2020, Universal revived the label as the successor to Virgin EMI, with Virgin Records now operating as an imprint of EMI Records.

Queen are a British rock band, whose classic line-up consisted of vocalist and pianist Freddie Mercury, guitarist Brian May, drummer Roger Taylor and bassist John Deacon. Founded in 1970, Queen released their self-titled debut album in 1973. Despite not being an immediate success, they quickly gained popularity in Britain with their second album Queen II in 1974. Their 1975 single, "Bohemian Rhapsody", was No. 1 in the UK charts for nine weeks and is the third biggest-selling single of all time in the UK. In the US, "Bohemian Rhapsody" hit the Billboard Top 40 charts in three different decades, reaching No. 9 on its original release in 1975, No. 2 in 1992 after being featured in the film Wayne's World, and hitting the Top 40 once more in 2018 upon the release of the Queen biopic Bohemian Rhapsody. The 1981 compilation Greatest Hits is the biggest-selling album in UK history, with 6 million copies sold by 2014. The 1991 compilation Greatest Hits II is also one of the UK's top ten biggest-sellers of all time, with 3.8 million copies sold by 2012.

Capitol Music Group is an American front line umbrella label owned by the Universal Music Group (UMG). The company is run by Chairman & CEO Jeff Vaughn. It oversees handling of record labels assigned to UMG's Capitol Records division and was inherited from its acquisition of EMI's catalog. It is one of seven umbrella labels owned by UMG, the other six being Interscope Geffen A&M, Island Records, Def Jam Recordings, Republic Records, Verve Records, and Decca Records.

This is a list of all recordings released by British gothic rock band the Mission.

TMS are a multi Grammy and Brit Award winning English songwriting and record production team composed of Tom 'Froe' Barnes, Benjamin Kohn and Pete 'Merf' Kelleher. The trio have written hit records for a host of stars including Lewis Capaldi, Dua Lipa, John Legend, Maroon 5, G-Eazy + Bebe Rexha. They have collectively had twenty Top 10 singles, sold over 15 million records, accumulated over 5 billion streams and have contributed to over fifty Top 40 albums. They currently hold the record for the longest running top 10 in UK chart history by a British act for Lewis Capaldi's "Someone You Loved", the song for which they were nominated for Song of the Year at the 63rd Annual Grammy Awards and won Song of the Year at the 2020 Brit Awards." 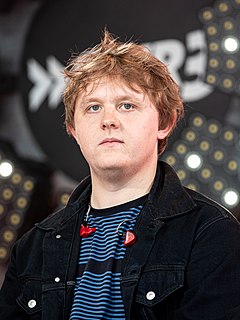 Lewis Marc Capaldi is a Scottish singer-songwriter and musician. He was nominated for the Critics' Choice Award at the 2019 Brit Awards. In March 2019, his single "Someone You Loved" topped the UK Singles Chart where it remained for seven weeks, and in November 2019, it reached number one on the US Billboard Hot 100; it was nominated at the 62nd Annual Grammy Awards for Song of the Year and won the 2020 Brit Award for Song of the Year. Capaldi also won the 2020 Brit Award for Best New Artist.

«Rock had to knock twice» a article on Swiss rock music history in Switzerland 1969–1987.