A fire alarm system has a number of devices working together to detect and warn people through visual and audio appliances when smoke, fire, carbon monoxide or other emergencies are present. These alarms may be activated automatically from smoke detectors, and heat detectors or may also be activated via manual fire alarm activation devices such as manual call points or pull stations. Alarms can be either motorized bells or wall mountable sounders or horns. They can also be speaker strobes which sound an alarm, followed by a voice evacuation message which warns people inside the building not to use the elevators. Fire alarm sounders can be set to certain frequencies and different tones including low, medium and high, depending on the country and manufacturer of the device. Most fire alarm systems in Europe sound like a siren with alternating frequencies. Fire alarm electronic devices are known as horns in the United States and Canada, and can be either continuous or set to different codes. Fire alarm warning devices can also be set to different volume levels.

After the fire protection are established – usually by referencing the minimum levels of protection mandated by the appropriate model building code, insurance agencies, and other authorities – the fire alarm designer undertakes to detail specific components, arrangements, and interfaces necessary to accomplish these goals. Equipment specifically manufactured for these purposes is selected and standardized installation methods are anticipated during the design.

Last version 2019; Status, Published. This code is part of a family standard NFPA

There are national codes in each European country for planning, design, installation, commissioning, use and maintenance of fire detection system with additional requirements that are mentioned on TS 54 -14

Fire alarm systems in non-domestic premises are generally designed and installed in accordance with the guidance given in BS 5839 Part 1. There are many types of fire alarm systems each suited to different building types and applications. A fire alarm system can vary dramatically in both price and complexity, from a single panel with a detector and sounder in a small commercial property to an addressable fire alarm system in a multi-occupancy building.

Categories for automatic systems are further subdivided into L1 to L5 and P1 to P2.

An important consideration when designing fire alarms is that of individual zones. The following recommendations are found in BS 5839 Part 1:

Also, the NFPA recommends placing a list for reference near the FACP showing the devices contained in each zone. 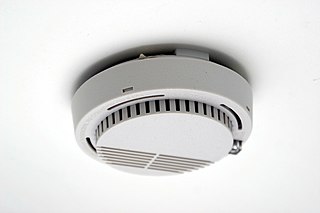 A fire alarm notification appliance is an active fire protection component of a fire alarm system. A notification appliance may use audible, visible, or other stimuli to alert the occupants of a fire or other emergency condition requiring action. Audible appliances have been in use longer than any other method of notification. Initially, all appliances were either electromechanical horns or electric bells, which would later be replaced by electronic sounders. Most of today's appliances produce sound pressure levels between 45 and 120 decibels at ten feet. 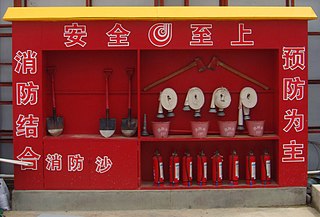 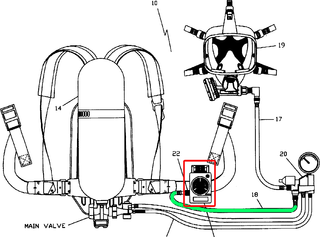 A PASS device also known as a distress signal unit (DSU) or ADSU, is a personal safety device used primarily by firefighters entering a hazardous (IDLH) environment such as a burning building. The PASS device sounds a loud (95 decibel) audible alert to notify others in the area that the firefighter is in distress. On a fireground, the sound of an activated PASS device indicates a true emergency and results in an immediate response to rescue the firefighter(s) in distress. In the United States, the National Fire Protection Association sets standards for PASS devices in NFPA 1982. 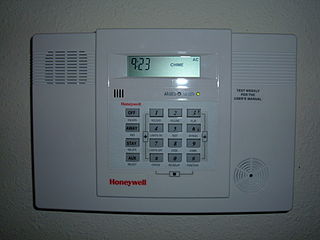 A security alarm is a system designed to detect intrusion – unauthorized entry – into a building or other area such as a home or school. Security alarms are used in residential, commercial, industrial, and military properties for protection against burglary (theft) or property damage, as well as personal protection against intruders. Security alarms in residential areas show a correlation with decreased theft. Car alarms likewise help protect vehicles and their contents. Prisons also use security systems for control of inmates. 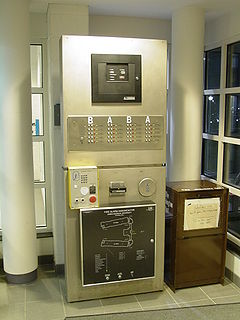 A fire alarm control panel (FACP), fire alarm control unit (FACU), or simply fire alarm panel is the controlling component of a fire alarm system. The panel receives information from devices designed to detect and report fires, monitors their operational integrity and provides for automatic control of equipment, and transmission of information necessary to prepare the facility for fire based on a predetermined sequence. The panel may also supply electrical energy to operate any associated initiating device, notification appliance, control, transmitter, or relay. There are four basic types of panels: coded panels, conventional panels, addressable panels, and multiplex systems.

Gaseous fire suppression, also called clean agent fire suppression, is a term to describe the use of inert gases and chemical agents to extinguish a fire. These agents are governed by the National Fire Protection Association (NFPA) Standard for Clean Agent Fire Extinguishing Systems – NFPA 2001 in the US, with different standards and regulations elsewhere. The system typically consists of the agent, agent storage containers, agent release valves, fire detectors, fire detection system, agent delivery piping, and agent dispersion nozzles. Less typically, the agent may be delivered by means of solid propellant gas generators that produce either inert or chemically active gas.

SimplexGrinnell, a subsidiary of Tyco International, is an American company specializing in active fire protection systems, communication systems and testing, inspection and maintenance services. The company headquarters is in Boca Raton, Florida; corporate sales and marketing offices are in Westminster, Massachusetts, and the company has about 160 district offices throughout North America. It is currently the largest fire protection company in the world.

Manual fire alarm activation is typically achieved through the use of a pull station or call point, which then sounds the evacuation alarm for the relevant building or zone. Manual fire alarm activation requires human intervention, as distinct from automatic fire alarm activation such as that provided through the use of heat detectors and smoke detectors. It is, however, possible for call points/pull stations to be used in conjunction with automatic detection as part of an overall fire detection and alarm system. Systems in completed buildings tend to be wired in and to include a control panel. Systems for use during construction can also be wireless or mechanical, however it is recommended by the Structural Timber Association in the UK that for timber-framed constructions, interconnecting wireless systems be used. 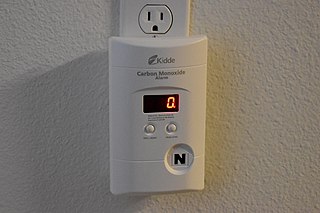 Notifier or Notifier by Honeywell is a manufacturer of engineered fire alarm systems with over 500 distributors worldwide, and regional support operations on every continent. Notifier is headquartered in Northford, Connecticut, United States, and is a division of the Honeywell Life Safety Group. 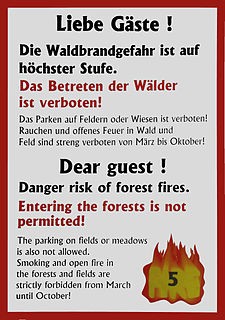 The NFPA 72 is a standard published by the National Fire Protection Association every 3 years for installations in the United States.

BS 5839 Part 1Fire detection and fire alarm systems for buildings – Part 1: Code of practice for design, installation, commissioning and maintenance of systems in non-domestic premises is a standard published by the British Standards Institution. BS 5839-1:2013 supersedes BS 5839-1:2002+A2:2008, which has been withdrawn.