The current Governor of Maine is Janet Mills, a Democrat, who took office January 2, 2019.

Under Article V, Section 4, a person must as of the commencement of the term in office, be 30 years old, for 15 years a citizen of the United States, and for five years a resident of Maine. A governor must retain residency in Maine throughout his or her term. Section 5 provides that a person shall not assume the office of Governor [3] while holding any other office under the United States, Maine, or "any other power".

Governors are elected directly for four-years terms, with a limit of two consecutive elected terms. Thus, a governor can serve an unlimited number of terms, as long as they serve no more than two in a row (Article V, Section 2). [3] Elections are by popular vote, but if two people tie for first place, the Legislature meets in joint session to choose between them (Article V, Section 3). [3]

The governor is commander-in-chief of "the army and navy of the State, and of the militia" (the Maine National Guard), except when under federal control (Article V, Section 7). [3] The governor generally has the power to appoint civil, military, and judicial officers (aside from probate judges and justices of the peace), subject to confirmation by the Legislature, unless the Maine Constitution or a statute has provided another means of appointment (Article V, Section 8). [3] He or she also has the power to grant pardons, reprieves, and commutations, except in cases of impeachment. This clemency power also includes juvenile offenses (Article V, Section 11). [3]

The Governor oversees the executive branch, which includes Maine's state agencies. Their cabinet is often considered to be the state's commissioners, which are generally nominated by the governor but legally chosen by the Maine Legislature.

Maine is one of five states that does not have an office of lieutenant governor. [18] Under current law, if there is a vacancy in the office of governor, the president of the Maine Senate becomes governor. As of December 5,2018 [update] , the Senate president is Democrat Troy Jackson. [19]

The Blaine House in Augusta is the official governor's mansion, and is located across the street from the Maine State House. It became the official residence in 1919, and is named for James G. Blaine, who once owned the mansion. The house was built by Captain James Hall in 1833 and declared a National Historic Landmark in 1964. [20] 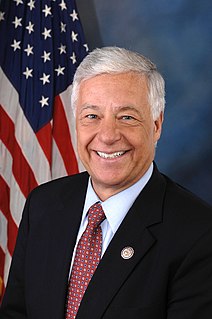 Michael Herman Michaud is an American businessman and politician from Maine. Michaud served as the U.S. Representative for Maine's 2nd congressional district 2003 to 2015. He is a member of the Democratic Party. The primarily rural district comprises nearly 80% of the state by area and includes the cities of Lewiston, Auburn, Bangor, and Presque Isle. It is the largest Congressional district by area east of the Mississippi River.

James Bernard Longley Sr. was an American politician. He served as the 69th Governor of Maine from 1975 to 1979, and was the first Independent to hold the office. In 1949, he married the former Helen Angela Walsh, who died on September 13, 2005. They had five children, including former Republican U.S. Representative James B. Longley Jr.. Longley Sr., a graduate of Bowdoin College in Brunswick, Maine, resided in Lewiston and Auburn, Maine.

The chief financial officer of Florida is an elected statewide constitutional officer of Florida. The office was created in 2002 following the 1998 reforms of the Florida Cabinet. The CFO is a combination of the former offices of comptroller and treasurer/insurance commissioner/fire marshal. The office heads the Florida Department of Financial Services and is responsible for overseeing the state's finances, collecting revenue, paying state bills, auditing state agencies, regulating cemeteries and funerals, and handling fires and arsons. In addition, the CFO has administrative oversight over the offices which handles banking and insurance regulation. The CFO is a member of the Cabinet is third in the line of succession to the office of Governor of Florida.. 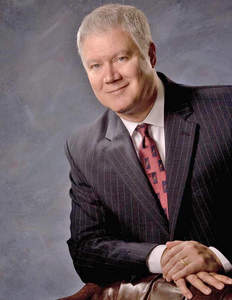 John G. Richardson is an American politician and consultant from Maine. A Democrat, he formerly served as Maine's Commissioner of Economic and Community Development and the Speaker of the Maine House of Representatives. Richardson unsuccessfully sought the Democratic nomination for Governor of Maine in 2010. In February 2018, the Portland Press Herald reported that Richardson was involved in a potential conflict of interest case regarding the University of Maine and a $100 million redevelopment plan for the nearby Old Town mill. On February 9, 2018 the Portland Press Herald reported that there weren't any conflict of interest issues involving UMaine or Richardson. 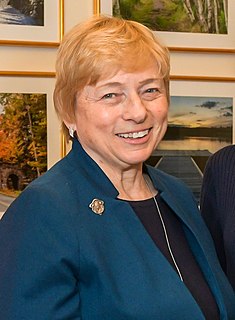 Janet Trafton Mills is an American lawyer and politician serving as the 75th governor of Maine, since January 2019. She previously served as the Maine Attorney General on two separate occasions.

The Maine Attorney General is the chief legal advisor and prosecutor of the State of Maine. The constitutional basis of the office is Article IX, Section 11 of the Maine Constitution, and the holder of the position is chosen biennially by the Maine Legislature in joint session. Maine is the only state to select its attorney general in such a manner.

Paul Richard LePage is an American businessman and politician who was the 74th Governor of Maine, from 2011 to 2019. A member of the Republican Party, LePage served two terms as a city councilor in Waterville, Maine, before being elected Mayor of Waterville in 2003, serving until 2011.

The 2014 Maine gubernatorial election took place on November 4, 2014, to elect the governor of Maine. Incumbent Republican governor Paul LePage ran for re-election to a second term in office, against Democrat Mike Michaud, the U.S. Representative from the second district, and independent Eliot Cutler, an attorney and second-place finisher from the 2010 gubernatorial election. The primary elections were held on June 10, 2014.

Teresea M. "Terry" Hayes is an American politician from Maine who served as the Maine State Treasurer and a candidate for Governor of Maine in 2018. A political independent, Hayes represented part of Oxford County, Maine, including her residence in Buckfield, Maine, as a Democrat from 2006 to 2014. She was unable to seek re-election to the Maine House of Representatives in 2014 due to term-limits.

The 2018 Maine gubernatorial election took place on November 6, 2018, to elect the next Governor of Maine. It occurred along with elections for the U.S. Senate, U.S. House, and other state and local elections. Incumbent Republican Governor Paul LePage was term limited and could not seek reelection to a third consecutive term in office, although he did later announce his campaign for a third term in the 2022 election. 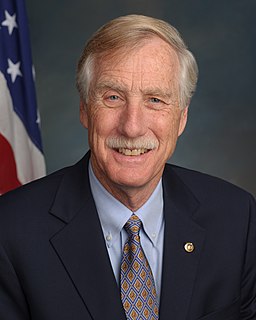 The 2018 United States Senate election in Maine was held on November 6, 2018, alongside a gubernatorial election, U.S. House elections, and other state and local elections. Incumbent Independent Senator Angus King won reelection to a second term.

Maine Question 5, formally An Act to Establish Ranked-Choice Voting, is a citizen-initiated referendum question that qualified for the Maine November 8, 2016 statewide ballot. It was approved by a vote of 52% in favor, 48% opposed. It sought to change how most Maine elections will be conducted from a plurality voting system to a ranked-choice voting system. It appeared on the ballot along with elections for President of the United States, Maine's two U.S. House seats, the legislature, five other ballot questions, and various local elections. The referendum was successful, making Maine the first state to use ranked choice voting for its federal elections.

Maine Question 1, formally An Act to Legalize Marijuana, is a citizen-initiated referendum question that qualified for the Maine November 8, 2016 statewide ballot. It was qualified for the ballot after a Maine Superior Court judge ordered that petitions rejected by the Maine Secretary of State be reconsidered. The proposal seeks to legalize the recreational use of marijuana in Maine for those over the age of 21, and institute a 10 percent tax on its sale. As the Maine Legislature and Governor Paul LePage declined to enact the proposal as written, it appeared on the ballot along with elections for President of the United States, Maine's two U.S. House seats, the Legislature, other statewide ballot questions, and various local elections.

Maine Question 2, formally entitled "An Act To Enhance Access to Affordable Health Care", was a citizen-initiated ballot measure that appeared on the November 7, 2017 statewide ballot in the State of Maine. Maine Question 2 sought to expand Medicaid eligibility under the terms of the Affordable Care Act. The measure passed.

Aaron M. Frey is an American lawyer and politician serving as the 58th Attorney General of Maine since 2019. He formerly served as a Democratic representative in the Maine House of Representatives. 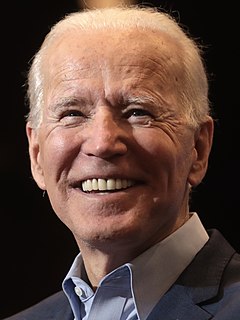 The 2020 Maine Democratic primary took place in Maine, United States, on March 3, 2020, as one of 14 contests scheduled on Super Tuesday in the Democratic Party primaries for the 2020 presidential election, following the South Carolina primary the weekend before. The Maine primary was a closed primary, meaning that only registered Democrats could vote in this primary. The state awarded 32 delegates towards the 2020 Democratic National Convention, 24 of which are pledged delegates allocated based on the results of the primary. Although the primary was only open to party members, unenrolled voters were permitted to enroll in a party at the polls with same day registration.

Catherine Connors is an American lawyer from Maine who is a Justice of the Maine Supreme Judicial Court.

Andrew M. Horton is a Justice of the Maine Supreme Judicial Court.