Early Ohio Republicans such as Salmon P. Chase staffed many important national offices. Chase coined the phrase "Free Soil, Free Labor, Free Men". [2] Starting in the 1880s, Ohio's Mark Hanna was a significant power in the back rooms of the national Republican party. In the 1890s, Hanna led the conservative wing of the party against Theodore Roosevelt's progressive movement.

In the 60 years from 1860 to 1920, Ohioans headed the Republican presidential ticket nine times, losing only twice. In 1912, Democrat Woodrow Wilson won with 40.96 percent of the vote, the Republican ticket was split, with Theodore Roosevelt leaving to start the Bull-Moose Party. In the 1916 election, Wilson won again with 49.24 percent of the vote.

The national political upheaval that ushered in the New Deal era in the 1930s benefited the Ohio Democratic Party. Party politics in Ohio became very competitive, with Republicans and Democrats trading victories at all levels.

During this time Robert A. Taft, known as "Mr. Republican," became the leader of the conservative wing of the Republican party during a time when progressives controlled both major parties, and one of the most popular Senators in Ohio history.

From the 1930s to the 1970s, Republicans still won the majority of elective offices in Ohio. Starting in the 1960s Ohio Democrats began to win more elections with rulings from the United States Supreme Court that required district representation be based on population and not land sized. The equalization of legislative districts shifted power to Ohio's cities and away from rural farmers. By the mid-1980s, Ohio government at all levels was dominated by Democrats.

By 1990, the Republicans had won a majority on the Ohio Apportionment Board, which draws district lines for federal and state legislative seats. The 1992 adoption of term limits by referendum further strengthened the party's hand and 1992 marked the last victory by a Democrat (John Glenn) in a statewide race until 2006.

State of the party

Redistricting after the 2000 census combined with Ohio's term limits laws had Republican officeholders at the federal and state levels struggling with each other to draw federal congressional districts to create safe seats, with the interests of incumbent US representatives clashing with the interests of state legislators facing term limits looking to Congress for their next jobs. About 43 percent of the voters voted for Democrats in 2000.

Redistricting should be a happy process for Republicans.... But the task has hardly been gleeful. Contrarily, it has turned into an embarrassment for Republicans.... Eight-year term limits, more than the state budget, are to blame. These days, state lawmakers constantly are scouting their next jobs.... [V]isions of Congress dance in their heads. They want districts ready-made for their ascensions. Meanwhile, congressional incumbents constantly angle for districts they can't possibly lose.

Although term limits were pushed by conservative Republican activists in the 1980s, they forced the retirement of Republican Speaker Jo Ann Davidson (R-Columbus) from the House of Representatives in 2001 as well as the leader of the conservative wing of the party, Deputy Speaker William G. Batchelder (R-Medina).

In 2001, Republicans sought United States House of Representatives seats held by Democrats Sherrod Brown and Ted Strickland. The state legislature considered redrawing their districts. Critics allege the motivation was to aid in Republican victories. When Democrat Brown threatened to run for governor in 2002, if he lost his seat through redistricting, the legislature scrapped redistricting plans. Republican Governor Taft won re-election. Taft was challenged by Cuyahoga County commissioner Tim Hagan. Both Brown and Strickland held onto their congressional seats.

By 2004, Republicans held all six statewide executive offices (governor/lieutenant governor, attorney general, secretary of state, auditor, and treasurer), a two-thirds majority in the state senate and house, a 5-2 majority on the Supreme Court, both seats in the US Senate, and 12 of Ohio's 18 seats in the US House of Representatives. In 2006, Democrats began to retake some statewide offices. These include all of the executive offices except State Auditor (including the governorship going to Ted Strickland over Republican challenger J. Kenneth Blackwell) and one of the seats in the US Senate (Sherrod Brown defeating incumbent Mike DeWine).

Ohio Republicans still held ten seats in the US House of Representatives, one seat in the U.S. Senate, and a majority in both houses of the Ohio General Assembly. Between the election of Robert Cupp in 2007, the death of Chief Justice Thomas Moyer, and the appointment of Democrat Eric Brown in 2010, Republicans had controlled all seven seats on the Ohio Supreme Court previously.

In November 2011, Gov. John Kasich's law that limits public worker's union bargain abilities was voted down by the people of Ohio. [4] This was a major blow to the platform that Gov. Kasich ran on in 2010.

The Taft family has been one of the most powerful political families in American history. Robert Taft, Sr. was the first Taft to come to America, around the 1670s. The Ohio section of Taft's are descendants of Robert, Sr.

The start of the five generations of Taft's in politics was with Alphonso Taft. He was the founder of the Ohio political dynasty that is associated with the Republican Party. Alphonso was in President Ulysses S. Grant's Cabinet, first as Attorney General then as Secretary of War. He was later appointed US Ambassador to the Austria-Hungary Empire. [6]

Both of William H. Taft's sons entered into politics. Robert A. Taft was a former US Senator and his other son Charles Phelps Taft II was former Mayor of Cincinnati. Both men were seen as great politicians.[ citation needed ]

The next generation of Taft politicians came from two of Robert's children. Robert Taft, Jr. served in both houses of the US Congress. His brother William Howard Taft III was Ambassador to Ireland.

In 2005, the Republican fundraiser and coin dealer Thomas Noe ran a rare coin fund that the State of Ohio had invested $50 million in. [7] Soon valuable coins came up missing and an investigation discovered Noe had taken around $13 million from the fund. He was convicted in 2006 and was sentenced to 18 years in state prison.[ citation needed ]

Noe was a top fundraiser for the George W. Bush campaign in Ohio in 2004, and the chairman for his campaign in Northwest Ohio. He was later convicted of making illegal contributions to the Bush campaign.[ citation needed ]

Noe had ties to then Governor Bob Taft. It was discovered through this scandal that the Governor and some of his top aides took improper gifts from Noe and other lobbyist.[ citation needed ] In 2005, Gov. Taft was charged with four misdemeanors related to these gifts.[ citation needed ]

This scandal had a negative effect on the Ohio Republican Party, who lost many seats in Congress after 2006 and the Governorship went to Ted Strickland. In 2008, Barack Obama won Ohio's 20 electoral college votes on his way to the presidency. 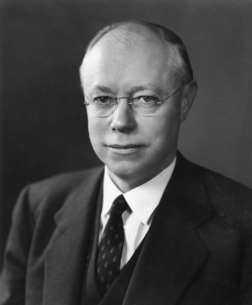 Robert Alphonso Taft Sr. was an American politician, lawyer, and scion of the Republican Party's Taft family. Taft represented Ohio in the United States Senate, briefly served as Senate Majority Leader, and was a leader of the conservative coalition of Republicans and conservative Democrats who prevented expansion of the New Deal. Often referred to as "Mr. Republican", he co-sponsored the Taft–Hartley Act of 1947, which banned closed shops, created the concept of right-to-work states, and regulated other labor practices. 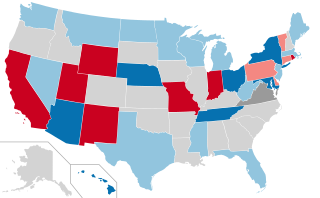 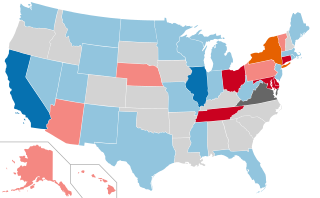 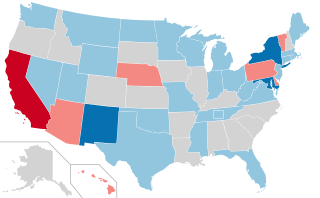 The 1964 United States Senate elections coincided with the election of President Lyndon B. Johnson by an overwhelming majority, to a full term. His Democratic Party picked up a net two seats from the Republicans. As of 2022, this was the last time either party has had a two-thirds majority in the Senate, which would have hypothetically allowed the Senate Democrats to override a veto, propose constitutional amendments, convict and expel certain officials, or invoke cloture without any votes from Senate Republicans. In practice, however, internal divisions effectively prevented the Democrats from doing so. The Senate election coincided with Democratic gains in the House in the same year. 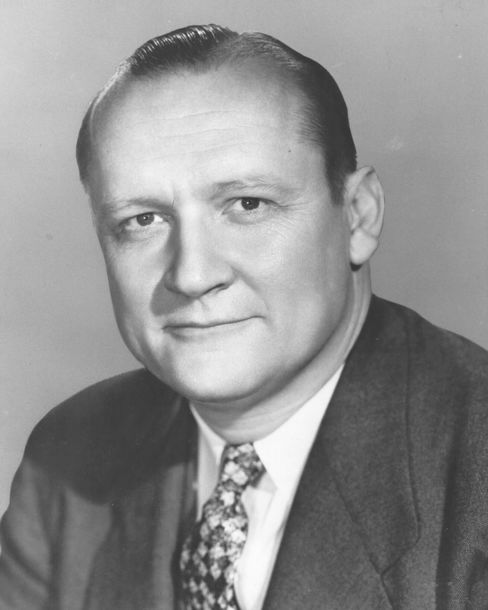 The following table indicates the party of elected officials in the U.S. state of New York:

The 2006 United States Senate election in West Virginia was held November 7, 2006. Incumbent Democrat Robert Byrd won re-election to a ninth term. He was sworn in on January 4, 2007. However, he died in office on June 28, 2010, before the end of his term. This was Byrd's closest re-election.

The 1908 and 1909 United States Senate elections were held to determine the winners of the 31 class 3 Senate seats up for election, as well as various special elections to fill vacancies or confirm appointments.

The Alabama Republican Party is the state affiliate of the Republican Party in Alabama. It is the dominant political party in Alabama. The state party is governed by the Alabama Republican Executive Committee. The committee usually meets twice a year. As of the February 23, 2019 meeting in Birmingham, the committee is composed of 463 members. Most of the committee's members are elected in district elections across Alabama. The district members are elected in the Republican Primary once every four years, with the most recent election for the committee having been on June 5, 2018. The new committee takes office following the general election in November 2018. In addition, all 67 county GOP chairmen have automatic seats as voting members. The state chairman can appoint 10 members. Each county committee can appoint bonus members based on a formula that theoretically could add 312 seats, although that formula currently calls for only about 50 seats.

The 1872 and 1873 United States Senate elections were elections which had the Republican Party, while still retaining a commanding majority, lose two seats in the United States Senate. By the beginning of the Congress, however, they'd lost three more: two as defections to the Liberal Republican Party, and one a resignation of Henry Wilson to become U.S. Vice President. These elections also coincided with President Ulysses S. Grant's easy re-election. 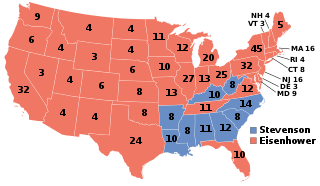 The 1952 United States elections were held on November 4, 1952. The Republicans took control of the presidency and both chambers of Congress for the first time since the Great Depression. The election took place during the Korean War. 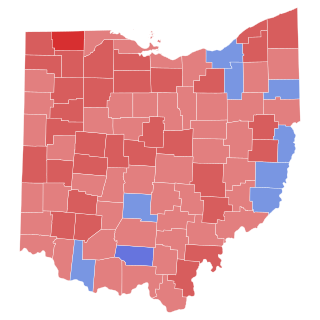 The 1938 United States Senate election in Ohio took place on November 7, 1938. Incumbent Senator Robert J. Bulkley ran for re-election to a second full term in office, but was defeated by the Republican nominee, former state Senator Robert A. Taft, the elder son of former President and supreme court chief justice William Howard Taft. Taft's victory was a part of a major Republican wave nationally, where Republicans gained 8 Senate seats and 81 seats in the House of Representatives, which was largely attributable to incumbent Democratic President Franklin Roosevelts's unpopularity in the aftermath of the Recession of 1937–1938 and the President's controversial plan to add more seats to the Supreme Court, which he proposed after the court ruled some of his New Deal programs unconstitutional. Taft's victory marked the beginning of 4 consecutive Republican victories in this seat, and Democrats would not win it again until Governor Frank Lausche won it in 1956.