Although polyhedra and tessellations had been studied for many years by people such as Kepler and Cauchy, modern discrete geometry has its origins in the late 19th century. Early topics studied were: the density of circle packings by Thue, projective configurations by Reye and Steinitz, the geometry of numbers by Minkowski, and map colourings by Tait, Heawood, and Hadwiger.

A polytope is a geometric object with flat sides, which exists in any general number of dimensions. A polygon is a polytope in two dimensions, a polyhedron in three dimensions, and so on in higher dimensions (such as a 4-polytope in four dimensions). Some theories further generalize the idea to include such objects as unbounded polytopes (apeirotopes and tessellations), and abstract polytopes.

The following are some of the aspects of polytopes studied in discrete geometry:

Packings, coverings, and tilings are all ways of arranging uniform objects (typically circles, spheres, or tiles) in a regular way on a surface or manifold.

A tessellation of a flat surface is the tiling of a plane using one or more geometric shapes, called tiles, with no overlaps and no gaps. In mathematics, tessellations can be generalized to higher dimensions.

Specific topics in this area include:

Structural rigidity is a combinatorial theory for predicting the flexibility of ensembles formed by rigid bodies connected by flexible linkages or hinges.

Formally, an incidence structure is a triple

is the incidence relation. The elements of

are called flags. If

we say that point p "lies on" line

An oriented matroid is a mathematical structure that abstracts the properties of directed graphs and of arrangements of vectors in a vector space over an ordered field (particularly for partially ordered vector spaces). [4] In comparison, an ordinary (i.e., non-oriented) matroid abstracts the dependence properties that are common both to graphs, which are not necessarily directed, and to arrangements of vectors over fields, which are not necessarily ordered. [5] [6]

A geometric graph is a graph in which the vertices or edges are associated with geometric objects. Examples include Euclidean graphs, the 1-skeleton of a polyhedron or polytope, unit disk graphs, and visibility graphs.

The discipline of combinatorial topology used combinatorial concepts in topology and in the early 20th century this turned into the field of algebraic topology.

In 1978, the situation was reversed – methods from algebraic topology were used to solve a problem in combinatorics – when László Lovász proved the Kneser conjecture, thus beginning the new study of topological combinatorics. Lovász's proof used the Borsuk-Ulam theorem and this theorem retains a prominent role in this new field. This theorem has many equivalent versions and analogs and has been used in the study of fair division problems.

A lattice in a locally compact topological group is a discrete subgroup with the property that the quotient space has finite invariant measure. In the special case of subgroups of Rn, this amounts to the usual geometric notion of a lattice, and both the algebraic structure of lattices and the geometry of the totality of all lattices are relatively well understood. Deep results of Borel, Harish-Chandra, Mostow, Tamagawa, M. S. Raghunathan, Margulis, Zimmer obtained from the 1950s through the 1970s provided examples and generalized much of the theory to the setting of nilpotent Lie groups and semisimple algebraic groups over a local field. In the 1990s, Bass and Lubotzky initiated the study of tree lattices, which remains an active research area.

Digital geometry deals with discrete sets (usually discrete point sets) considered to be digitized models or images of objects of the 2D or 3D Euclidean space.

Simply put, digitizing is replacing an object by a discrete set of its points. The images we see on the TV screen, the raster display of a computer, or in newspapers are in fact digital images.

Its main application areas are computer graphics and image analysis. [7]

Mathematics encompasses a growing variety and depth of subjects over history, and comprehension requires a system to categorize and organize the many subjects into more general areas of mathematics. A number of different classification schemes have arisen, and though they share some similarities, there are differences due in part to the different purposes they serve. In addition, as mathematics difficult by some subjects, often the most active, which straddle the boundary between different areas. 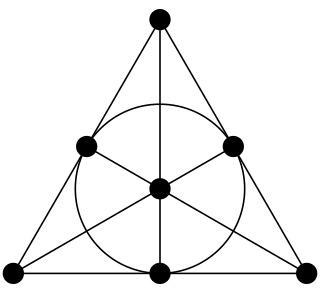 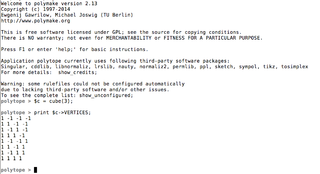 Polymake is software for the algorithmic treatment of convex polyhedra.

A Euclidean graph is periodic if there exists a basis of that Euclidean space whose corresponding translations induce symmetries of that graph. Equivalently, a periodic Euclidean graph is a periodic realization of an abelian covering graph over a finite graph. A Euclidean graph is uniformly discrete if there is a minimal distance between any two vertices. Periodic graphs are closely related to tessellations of space and the geometry of their symmetry groups, hence to geometric group theory, as well as to discrete geometry and the theory of polytopes, and similar areas.

Károly Bezdek is a Hungarian-Canadian mathematician. He is a professor as well as a Canada Research Chair of mathematics and the director of the Centre for Computational and Discrete Geometry at the University of Calgary in Calgary, Alberta, Canada. Also he is a professor of mathematics at the University of Pannonia in Veszprém, Hungary. His main research interests are in geometry in particular, in combinatorial, computational, convex, and discrete geometry. He has authored 3 books and more than 130 research papers. He is a founding Editor-in-Chief of the e-journal Contributions to Discrete Mathematics (CDM).

In geometry, the moment curve is an algebraic curve in d-dimensional Euclidean space given by the set of points with Cartesian coordinates of the form

A flip graph is a graph whose vertices are combinatorial or geometric objects, and whose edges link two of these objects when they can be obtained from one another by an elementary operation called a flip. Flip graphs are special cases of geometric graphs.