In order for current to flow within a closed electrical circuit, it is not necessary for one charged particle to travel from the component producing the current (the current source) to those consuming it (the loads). Instead, the charged particle simply needs to nudge its neighbor a finite amount, who will nudge its neighbor, and on and on until a particle is nudged into the consumer, thus powering it. Essentially what is occurring is a long chain of momentum transfer between mobile charge carriers; the Drude model of conduction describes this process more rigorously. This momentum transfer model makes metal an ideal choice for a conductor; metals, characteristically, possess a delocalized sea of electrons which gives the electrons enough mobility to collide and thus affect a momentum transfer.

As discussed above, electrons are the primary mover in metals; however, other devices such as the cationic electrolyte(s) of a battery, or the mobile protons of the proton conductor of a fuel cell rely on positive charge carriers. Insulators are non-conducting materials with few mobile charges that support only insignificant electric currents.

. Resistivity is a measure of the material's ability to oppose electric current.

This formula is not exact: It assumes the current density is totally uniform in the conductor, which is not always true in practical situation. However, this formula still provides a good approximation for long thin conductors such as wires.

Another situation this formula is not exact for is with alternating current (AC), because the skin effect inhibits current flow near the center of the conductor. Then, the geometrical cross-section is different from the effective cross-section in which current actually flows, so the resistance is higher than expected. Similarly, if two conductors are near each other carrying AC current, their resistances increase due to the proximity effect. At commercial power frequency, these effects are significant for large conductors carrying large currents, such as busbars in an electrical substation, [2] or large power cables carrying more than a few hundred amperes.

Aside from the geometry of the wire, temperature also has a significant effect on the efficacy of conductors. Temperature affects conductors in two main ways, the first is that materials may expand under the application of heat. The amount that the material will expand is governed by the thermal expansion coefficient specific to the material. Such an expansion (or contraction) will change the geometry of the conductor and therefore its characteristic resistance. However, this effect is generally small, on the order of 10−6. An increase in temperature will also increase the number of phonons generated within the material. A phonon is essentially a lattice vibration, or rather a small, harmonic kinetic movement of the atoms of the material. Much like the shaking of a pinball machine, phonons serve to disrupt the path of electrons, causing them to scatter. This electron scattering will decrease the number of electron collisions and therefore will decrease the total amount of current transferred.

Conduction materials include metals, electrolytes, superconductors, semiconductors, plasmas and some nonmetallic conductors such as graphite and conductive polymers.

Copper has a high conductivity. Annealed copper is the international standard to which all other electrical conductors are compared; the International Annealed Copper Standard conductivity is 58 MS/m, although ultra-pure copper can slightly exceed 101% IACS. The main grade of copper used for electrical applications, such as building wire, motor windings, cables and busbars, is electrolytic-tough pitch (ETP) copper (CW004A or ASTM designation C100140). If high conductivity copper must be welded or brazed or used in a reducing atmosphere, then oxygen-free high conductivity copper (CW008A or ASTM designation C10100) may be used. [3] Because of its ease of connection by soldering or clamping, copper is still the most common choice for most light-gauge wires.

Silver is 6% more conductive than copper, but due to cost it is not practical in most cases. However, it is used in specialized equipment, such as satellites, and as a thin plating to mitigate skin effect losses at high frequencies. Famously, 14,700 short tons (13,300 t) of silver on loan from the United States Treasury were used in the making of the calutron magnets during World War II due to wartime shortages of copper.

Aluminum wire is the most common metal in electric power transmission and distribution. Although only 61% of the conductivity of copper by cross-sectional area, its lower density makes it twice as conductive by mass. As aluminum is roughly one-third the cost of copper by weight, the economic advantages are considerable when large conductors are required.

The disadvantages of aluminum wiring lie in its mechanical and chemical properties. It readily forms an insulating oxide, making connections heat up. Its larger coefficient of thermal expansion than the brass materials used for connectors causes connections to loosen. Aluminum can also "creep", slowly deforming under load, which also loosens connections. These effects can be mitigated with suitably designed connectors and extra care in installation, but they have made aluminum building wiring unpopular past the service drop.

Organic compounds such as octane, which has 8 carbon atoms and 18 hydrogen atoms, cannot conduct electricity. Oils are hydrocarbons, since carbon has the property of tetracovalency and forms covalent bonds with other elements such as hydrogen, since it does not lose or gain electrons, thus does not form ions. Covalent bonds are simply the sharing of electrons. Hence, there is no separation of ions when electricity is passed through it. Liquids made of compounds with only covalent bonds cannot conduct electricity. Certain organic ionic liquids, by contrast, can conduct an electric current.

While pure water is not an electrical conductor, even a small portion of ionic impurities, such as salt, can rapidly transform it into a conductor.

Wires are measured by their cross sectional area. In many countries, the size is expressed in square millimetres. In North America, conductors are measured by American wire gauge for smaller ones, and circular mils for larger ones.

For bare conductors, the ultimate limit is the point at which power lost to resistance causes the conductor to melt. Aside from fuses, most conductors in the real world are operated far below this limit, however. For example, household wiring is usually insulated with PVC insulation that is only rated to operate to about 60 °C, therefore, the current in such wires must be limited so that it never heats the copper conductor above 60 °C, causing a risk of fire. Other, more expensive insulation such as Teflon or fiberglass may allow operation at much higher temperatures. 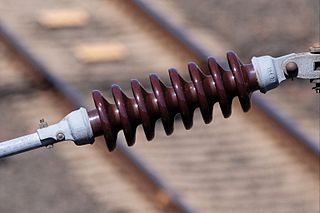 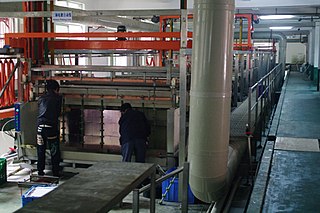 Electroplating is a general name for processes that produce a metal coating on a solid substrate through the reduction of cations of that metal by means of a direct electric current. The part to be coated acts as the cathode of an electrolytic cell; the electrolyte is a solution of a salt of the metal to be coated; and the anode is usually either a block of that metal, or of some inert conductive material. The current is provided by an external power supply.

Thermal conduction is the transfer of internal energy by microscopic collisions of particles and movement of electrons within a body. The colliding particles, which include molecules, atoms, and electrons, transfer disorganized microscopic kinetic and potential energy when joined, known as internal energy. Conduction takes place in most phases: solid, liquid, gases and plasma. 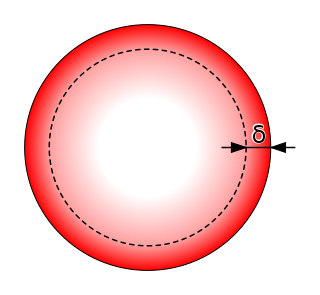 Skin effect is the tendency of an alternating electric current (AC) to become distributed within a conductor such that the current density is largest near the surface of the conductor and decreases exponentially with greater depths in the conductor. The electric current flows mainly at the "skin" of the conductor, between the outer surface and a level called the skin depth. Skin depth depends on the frequency of the alternating current; as frequency increases, current flow moves to the surface, resulting in less skin depth. Skin effect reduces the effective cross-section of the conductor and thus increases its effective resistance. Skin effect is caused by opposing eddy currents induced by the changing magnetic field resulting from the alternating current. At 60 Hz in copper, the skin depth is about 8.5 mm. At high frequencies the skin depth becomes much smaller.

American Wire Gauge (AWG), also known as the Brown & Sharpe wire gauge, is a logarithmic stepped standardized wire gauge system used since 1857, predominantly in North America, for the diameters of round, solid, nonferrous, electrically conducting wire. Dimensions of the wires are given in ASTM standard B 258. The cross-sectional area of each gauge is an important factor for determining its current-carrying ampacity.

Electromigration is the transport of material caused by the gradual movement of the ions in a conductor due to the momentum transfer between conducting electrons and diffusing metal atoms. The effect is important in applications where high direct current densities are used, such as in microelectronics and related structures. As the structure size in electronics such as integrated circuits (ICs) decreases, the practical significance of this effect increases.

A power cable is an electrical cable, an assembly of one or more electrical conductors, usually held together with an overall sheath. The assembly is used for transmission of electrical power. Power cables may be installed as permanent wiring within buildings, buried in the ground, run overhead, or exposed. Power cables that are bundled inside thermoplastic sheathing and that are intended to be run inside a building are known as NM-B. 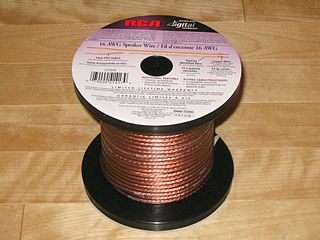 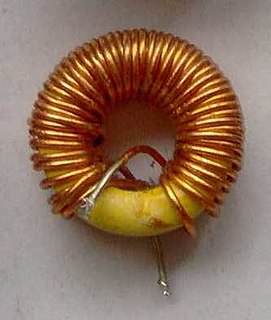 Magnet wire or enameled wire is a copper (Cu) or aluminium (Al) wire coated with a very thin layer of insulation. It is used in the construction of transformers, inductors, motors, generators, speakers, hard disk head actuators, electromagnets, electric guitar pickups and other applications that require tight coils of insulated wire.

Resistivity logging is a method of well logging that works by characterizing the rock or sediment in a borehole by measuring its electrical resistivity. Resistivity is a fundamental material property which represents how strongly a material opposes the flow of electric current. In these logs, resistivity is measured using four electrical probes to eliminate the resistance of the contact leads. The log must run in holes containing electrically conductive mud or water, i.e., with enough ions present in the drilling fluid. 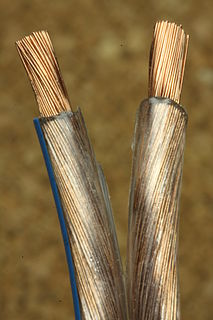