In spite of enormous differences in populations, each of the communes of the French Republic possesses a mayor (French : maire) and a municipal council (French : conseil municipal), which manage the commune from the mairie (city hall), with exactly the same powers no matter the size of the commune and council. The one exception is the city of Paris, where the city police is in the hands of the central state, not in the hands of the mayor of Paris. This uniformity of status is a clear legacy of the French Revolution, which wanted to do away with the local idiosyncrasies and tremendous differences of status that existed in the kingdom of France.

Established as the Sanitary Board in 1883, the Municipal Council in Hong Kong Island and Kowloon (including the New Kowloon) provided municipal services to the covered regions in the then British Hong Kong. Partial elections were allowed in 1887, though merely enabling selected persons to vote for members of the Board. The Board was reconstituted in 1935 and hence renamed as Urban Council in the following year after the government had passed the Urban Council Ordinance. Democratisation had been implemented, allowing universal suffrage to happen throughout its development. Two years after the Transfer of sovereignty over Hong Kong, the Council was disbanded in 1999 by the then Chief Executive of Hong Kong Special Administrative Region. All members of the council were elected through universal suffrage by the time of the dissolution.

Both of the Municipal Councils in Hong Kong are now defunct.

The Municipal Council in Moldova is the governing body in five municipalities: Chișinău, [1] Bălți, Tiraspol and Bendery (also known as Tighina or Bender). The Municipal Council (Moldovan language: Consiliul municipal) serves as a consultative body with some powers of general policy determination. [1] It is composed of a legally determined number of counsellors (for example 35 in Bălți) elected every four years, representing political parties and independent counsellors. Once elected, counsellors may form fractions inside of the Municipal Council. [1]

Last regional elections of local public administration held in Bălți in June 2007, brought to the power the Party of Communists of the Republic of Moldova (PCRM), which holds 21 mandates, 11 mandates are held by representatives of other parties, and 3 mandates by independents. There are two fractions in the Municipal Council: PCRM fraction (21 counsellors) and "Meleag" fraction (3 independent counsellors and 4 representatives of different parties).

The Mayor of the municipality is elected for four years. In Bălți, Vasile Panciuc (PCRM) is the incumbent from 2001 and was re-elected twice: in 2003 during the anticipated elections (as a result of a new reform of the administrative division in Moldova in 2003), and in 2007. In Chișinău, the last mayor elections had to be repeated three times, because of the low rate of participation. As a result, Dorin Chirtoacă (Liberal Party), won the last mayor elections in Chișinău.

In the Netherlands the municipal council (Dutch: gemeenteraad) is the elected assembly of the municipality. It consists of between 9 and 45 members (as determined by law) who are elected by the citizens once every four years.

The council's main tasks are setting the city's policies and overseeing the execution of those policies by the municipality's executive board.

The municipal council (Norwegian : Kommunestyre), literally municipal board, is the highest governing body of the municipality in Norway. The municipal council sets the scope of municipal activity, takes major decisions, and delegates responsibility. The council is led by a mayor (ordfører) s divided into an executive council (formannskap) and a number of committees, each responsible for a subsection of tasks. It is not uncommon for some members of the council to sit in the county councils too, but very rare that they also hold legislative (Storting) or Government office, without leave of absence.

The municipal council dates back to 1837 with the creation of the Formannskabsdistrikt. In cities the council is often called a city council (bystyre).

In the Republic of China, a municipal council represents a special municipality. Members of the councils are elected through municipal elections held every 4–5 years.

Vladimir Voronin is a Moldovan politician. He was the third President of Moldova from 2001 until 2009 and has been the First Secretary of the Party of Communists of the Republic of Moldova (PCRM) since 1994. He was Europe's first democratically elected communist party head of state after the dissolution of the Eastern Bloc.

The Hong Kong Association for Democracy and People's Livelihood is a Hong Kong pro-democracy social-liberal political party catering to grassroots interest with a strong basis in Sham Shui Po. Established on 26 October 1986, it was one of the three major pro-democracy groups along with the Meeting Point and the Hong Kong Affairs Society in the 1980s. 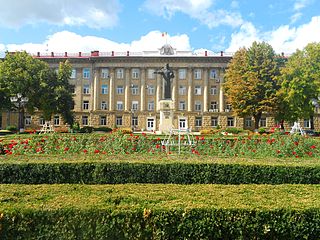 Bălți is a city in Moldova. It is the second largest city in terms of population, area and economic importance, after Chișinău. The city is one of the five Moldovan municipalities. Sometimes also called "the northern capital", it is a major industrial, cultural and commercial centre and transportation hub in the north of the country. It is situated 127 kilometres (79 mi) north of the capital Chișinău, and is located on the river Răut, a tributary of the Dniester, on a hilly landscape in the Bălți steppe.

The Social Democratic Party is an extra-parliamentary political party in Moldova currently led by Victor Șelin.

The Urban Council (UrbCo) was a municipal council in Hong Kong responsible for municipal services on Hong Kong Island and in Kowloon. These services were provided by the council's executive arm, the Urban Services Department. The equivalent body for the New Territories was the Regional Council.

Dumitru Braghiș is a Moldovan political figure, who is from November 27, 2015, the Extraordinary and Plenipotentiary Ambassador of the Republic of Moldova to the Russian Federation. He was the Prime Minister of Moldova from 1999 until 2001. Then, he was a member of the Parliament of Moldova, where he represented the Party Alliance Our Moldova. He was chairman of the Party of Social Democracy and deputy in the Parliament of the Republic of Moldova.

Parliamentary elections were held in Moldova on 5 April 2009. The Party of Communists of the Republic of Moldova (PCRM) won a majority of seats for the third consecutive occasion. Turnout was 59%, exceeding the 50% necessary for the election to be valid.

The Liberal Democratic Party of Moldova is a conservative political party in Moldova. The party is led by Tudor Deliu. Until 2016, PLDM was led by Vlad Filat, who was Prime Minister of Moldova from 2009 to 2013, in two cabinets. Immediately after the 2014 parliamentary elections, with 21 seats in the Moldovan Parliament, PLDM was the largest of the three democratic pro-European parliamentary parties.

Marian Lupu is a Moldovan politician who was the President of the Parliament of Moldova between 2010 and 2013. From this position he served as Acting President of the Republic from 2010 until 2012.

Ion Cebanu is a Moldovan politician. He was Minister of Youth and Sports between September 25, 2009 and February 26, 2013, in the First Vlad Filat Cabinet and in the Second Filat Cabinet as well, President of the Liberal Party Territorial Organization, Centru branch of Chisinau, member of the Central Permanent Bureau of the Liberal Party, president of the Public Association "Optimus".

Nicolae Costin was a Moldovan politician and one of the leaders of the national emancipation movement from Moldavian SSR. He was a professor, executive chairman of the Popular Front of Moldova, deputy in the first elected Parliament (1990-1994) of the Republic of Moldova, co-author of the Declaration of Independence of the Republic of Moldova, president of the Municipal Council and Mayor of the municipality Chişinău (1990-1994).

Vasile Ursu is an engineer and is a Moldovan politician, the MP at the first Parliament of the Republic of Moldova in 1990-1994, acting interim general mayor of Chișinău in 2005-2007 and minister of transport and road management for 2007-2008. In 2008-2009 he held the position of Deputy Minister of Construction and Territory Development.

Anatolie Onceanu is a Moldovan MP in the Parliament of the Republic of Moldova, elected in the Legislature 2005-2009 on the lists of the Electoral Bloc Democratic Moldova.

Mihail Formuzal is a Moldovan politician of Gagauz ethnicity, who was Governor (Başkan) of the Autonomous Territorial Unit of Gagauzia from December 2006 to March 2015.