Paeonia once stretched north of Macedon, into Dardania, and in earlier times into southwestern Thrace.

Classical sources usually considered the Paeonians distinct from the rest of the Paleo-Balkan people, comprising their own ethnicity and language. It is considered a Paleo-Balkan language but this is only a geographical grouping, not a genealogical one. Modern linguists are uncertain as to the classification of Paeonian, due to the extreme scarcity of surviving materials in the language, with numerous hypotheses having been published:

The Dardani were a Paleo-Balkan tribe, which lived in a region which was named Dardania after their settlement there. The eastern parts of the region were at the Thraco-Illyrian contact zone. In archaeological research, Illyrian names are predominant in western Dardania, while Thracian names are mostly found in eastern Dardania. Thracian names are absent in western Dardania; some Illyrian names appear in the eastern parts. Thus, their identification as either an Illyrian or Thracian tribe has been a subject of debate; the ethnolinguistic relationship between the two groups being largely uncertain and debated itself as well. The correspondence of Illyrian names, including those of the ruling elite, in Dardania with those of the southern Illyrians suggests a "thracianization" of parts of Dardania. Strabo in his geographica mentions them as one of the three strongest Illyrian peoples, the other two being the Ardiaei and Autariatae. 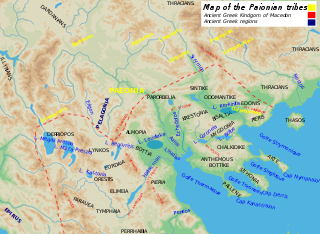 The Agrianes or Agrianians, were a tribe whose country was centered at Upper Strymon, in present-day central Western Bulgaria, at the time situated north of the Dentheletae. Per Strabo the source of the river Strymon was within Agrianes' territory. In the times of Philip II, the territory of the Agrianes was administered by Pella. They were crack javelin throwers and an elite unit of Alexander the Great's light infantry, who fought under the command of General Attalus.

The Derrones were a Thracian or a Paionian tribe. Our knowledge of them comes from coins bearing variations of the legend of DERRONIKON (ΔΕΡΡΟΝΙΚΟΝ) - DERR (ΔΕΡΡ). The letters used in the coins are Greek, although this does not prove that the Derrones spoke the same language as their southern neighbours. These coins, which were perhaps made for export as much as for internal trade, are traditionally dated to 500–450 BC.

The Armeno-Phrygians are a hypothetical people of West Asia in History. They would be the common ancestors of both Phrygians and Proto-Armenians and modern Armenians.