The Pyralidae, commonly called pyralid moths, [2] snout moths or grass moths, [3] are a family of Lepidoptera in the ditrysian superfamily Pyraloidea. [4] [5] In many (particularly older) classifications, the grass moths (Crambidae) are included in the Pyralidae as a subfamily, making the combined group one of the largest families in the Lepidoptera. The latest review by Eugene G. Munroe and Maria Alma Solis retain the Crambidae as a full family of Pyraloidea. [6]

It is a diverse group, with more than 6,000 species described worldwide, and more than 600 species in America north of Mexico, comprising the third largest moth family in North America. At least 42 species have been recorded from North Dakota in the subfamilies of Pyralidae. [8]

Most of these small moths are inconspicuous. Many are economically important pests, including waxworms, which are the caterpillar larvae of the greater ( Galleria mellonella ) and lesser ( Achroia grisella ) wax moths (subfamily Galleriinae). They are natively pests of beehives, but are bred indoors in enormous numbers as live food for small reptile and bird pets and similar animals. They are also used as fishing bait for trout fishing.

Other notable snout moth pests relevant for their larval hosts include: [9]

The European corn borer ( Ostrinia nubilalis ) and southern cornstalk borer ( Diatraea crambidoides ), formerly considered snout moths, are placed in the Crambidae which, as noted above, are usually regarded as a separate family today.

Five subfamilies are generally recognized in the Pyralidae today. The Acentropinae (= Nymphulinae), occasionally still placed here, do indeed seem to belong in the Crambidae.

The snout moth subfamilies are, listed in the presumed phylogenetic sequence from the most primitive to the most advanced:

In addition to those assigned to the tribes above, several genera of (presumed) Pyralidae are not firmly placed in this arrangement, but are incertae sedis . Some may be very basal lineages which stand outside the main snout moth radiations, but given the changing circumscription of the Pyralidae, some are likely to be placed outside this group in its modern meaning, either in the Crambidae or in other lineages of basal Obtectomera. Some may even belong to more ancient moth lineages, such as the Alucitoidea or Pterophoroidea. Finally, some of these (usually little-studied) genera possibly are junior synonyms of genera described earlier. These genera are in the unranked category of the family Pyralidae. [15]

The genera in question are:

These genera have been placed in the Pyralidae when these were still circumscribed sensu lato and are sometimes still treated thus, but actually they seem to belong in the Crambidae (see also Micronix and Tanaobela ): [15] 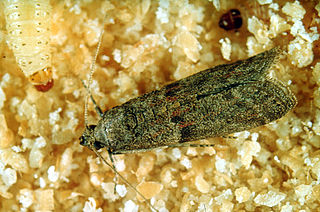 The almond moth or tropical warehouse moth is a small, stored-product pest. Almond moths infest flour, bran, oats, and other grains, as well as dried fruits. It belongs to the family of snout moths (Pyralidae), and more specifically to the tribe Phycitini of the huge snout moth subfamily Phycitinae. This species may be confused with the related Indian mealmoth or the Mediterranean flour moth, which are also common pantry pests in the same subfamily.

The Pyralini are a tribe of snout moths described by Pierre André Latreille in 1809. They belong to the subfamily Pyralinae, which contains the "typical" snout moths of the Old World and some other regions. The genus list presented here is provisional.

Ephestia is a genus of small moths belonging to the family Pyralidae. Some species are significant pests of dry plant produce, such as seeds and cereals. Best known among these are probably the cacao moth and the Mediterranean flour moth. 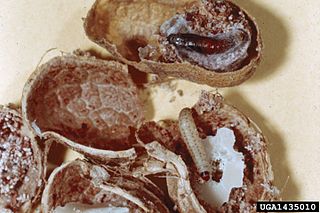 Cadra is a genus of small moths belonging to the family Pyralidae. The genus Ephestia is closely related to Cadra and might be its senior synonym. Several of these moths are variously assigned to one or the other genus, in particular in non-entomological sources. Cadra and Ephestia belong to the huge snout moth subfamily Phycitinae, and therein to the tribe Phycitini.

The Chrysauginae are a subfamily of snout moths. They are primarily Neotropical and include about 400 described species.

Coleothrix is a genus of snout moths in the subfamily Phycitinae. It was described by Ragonot in 1888.

Cadra corniculata is a species of snout moth in the genus Cadra. It was described by Marianne Horak in 1994. It is found in western Australia.

Cadra rugosa is a species of snout moth in the genus Cadra. It was described by Marianne Horak in 1994. It is found in central Australia.

Cadra perfasciata is a species of snout moth in the genus Cadra. It was described by Marianne Horak in 1994. It is found in the southern arid areas of Australia, on both sides of the Nullarbor Plain.

Cryptoblabes plagioleuca, the mango-flower moth, blossom moth or mango-flower webber, is a species of snout moth in the genus Cryptoblabes. It was described by Turner in 1904. It is found from Indonesia (Sumatra), New Hebrides, Australia and the Society Islands.

Cathyalia is a genus of snout moths. It was erected by Émile Louis Ragonot in 1888.

Indomalayia is a monotypic genus of snout moths that was first described by Rolf-Ulrich Roesler and Peter Victor Küppers in 1979. Its sole species is Indomalayia flabellifera, originally described by George Hampson in 1896 as Spatulipalpia flabellifera, which is found in India, Indonesia (Sumatra), Malaysia, New Zealand, Singapore, Sri Lanka and Fergusson Island and Australia. 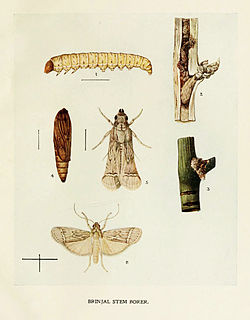