A sanctuary lamp, chancel lamp, altar lamp, everlasting light, or eternal flame is a light that shines before the altar of sanctuaries in many Jewish places of worship. [1] Prescribed in Exodus 27:20-21 of the Torah, this icon has taken on different meanings in each of the religions that have adopted it. The passage, which refers to prescriptions for the tabernacle, states:

In Judaism, the sanctuary lamp is known by its Hebrew name, Ner Tamid (Hebrew: "eternal flame" or "eternal light"). Hanging or standing in front of the ark in every Jewish synagogue, it is meant to represent the menorah of the Temple in Jerusalem as well as the continuously burning fire on the altar of burnt offerings in front of the Temple. [2] It also symbolizes God's eternal presence and is therefore never extinguished.[ citation needed ] It is also intended to draw parallels between God and fire, or light, which is emphasized throughout the book of Exodus in the Torah.[ citation needed ]

These lights are never allowed to dim or go out, and in the case of electric problems, alternative emergency energy sources are used to prevent it from diminishing. [ citation needed ]

Though once fuelled by oil, most today are electric lights.[ citation needed ]

The eternal light is central to one of many stories behind the celebration of the Jewish festival of Hanukkah. When the ancient Maccabees rebelled and reclaimed the Temple in Jerusalem, they rekindled the eternal light. However, there was only enough oil to keep the flame burning for one day, and it took eight days to bring new oil. Miraculously, according to the story as recounted in the Talmud, the flame continued to burn until the new oil arrived.

Today, Jewish celebrations of Hanukkah include the lighting of the Hanukkah menorah (Hanukkiyah), which has nine branches: including one for the candle used to light the eight flames (candles or wicks in oil), recalling the story.

Christian churches often have at least one lamp continually burning before the tabernacle, not only as an ornament of the altar, but for the purpose of worship. The General Instruction of the Roman Missal in the Catholic Church, for instance, states (in 316): "In accordance with traditional custom, near the tabernacle a special lamp, fueled by oil or wax, should be kept alight to indicate and honor the presence of Christ." The sanctuary lamp, also called a chancel lamp, is placed before the tabernacle or aumbry in Roman Catholic churches as a sign that the Lord is present, Old Catholic, and Anglican churches as a sign that the Blessed Sacrament is reserved or stored. It is also found in the chancel of Lutheran and Methodist churches to indicate the presence of Christ in the sanctuary, as well as a belief in the Real Presence of Christ in the Eucharist. [3] [4] The sanctuary lamp may also be seen in Eastern Orthodox Churches. Other Christian denominations burn the lamp to show that the light of Christ always burns in a sin-darkened world. With influence from Judaism in the Old Testament, God told Moses that a lamp filled with the pure oil should perpetually burn in the Tabernacle (Ex 27:20-21). This is the precedent for the Catholic Church's custom of burning a candle (at all times) before the tabernacle – the gold house where the Eucharistic Body of Christ is reserved under lock and key. In Jewish practice, this Altar lamp is known for its Hebrew name, ner tamid (Hebrew : נֵר תָּמִיד). [5]

Such sanctuary or tabernacle lamps are often coloured red, though this is not prescribed by law. This serves to distinguish this light from other votive lights within the church. In the Catholic Church, red is widely used despite the preference for white expressed by Fortescue. [6] The use of multiple lights, always in odd numbers, i.e., three, five, seven, or more, in place of a single lamp has now become rarer, though it is still seen in some older Catholic churches and in eastern Christian churches. The lamp may be suspended by a rope or chain over the tabernacle or near the entry of the sanctuary, or it may be affixed to a wall; it is also sometimes placed on a ledge beside the tabernacle or on an individual stand placed on the floor, as seen in the image of St. Martin's church, Kortrijk, Belgium, in the article Church tabernacle. Oil lamps or candles may be used.

Secular references to the Sanctuary lamp

In the United States, the Boy Scout Jewish religious emblem, a medal earned by scouts for meeting certain requirements of religious activity and education, is called the Ner Tamid. [7]

Hanukkah is a Jewish festival commemorating the rededication of the Second Temple in Jerusalem at the time of the Maccabean Revolt against the Seleucid Empire. It is also known as the Festival of Lights.

The menorah is described in the Bible as the seven-lamp ancient Hebrew lampstand made of pure gold and used in the portable sanctuary set up by Moses in the wilderness and later in the Temple in Jerusalem. Fresh olive oil of the purest quality was burned daily to light its lamps. The menorah has been a symbol of Judaism since ancient times and is the emblem on the coat of arms of the modern state of Israel. 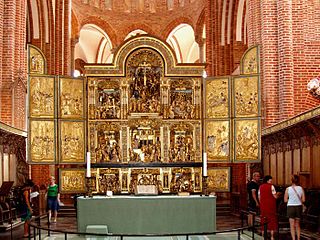 An altar is a structure upon which offerings such as sacrifices are made for religious purposes. Altars are found at shrines, temples, churches and other places of worship. They are used particularly in Christianity, Buddhism, Hinduism, Judaism, and Modern Paganism. Many historical faiths also made use of them, including Roman, Greek and Norse religion.

According to the Hebrew Bible the tabernacle, also known as the Tent of the Congregation, was the portable earthly dwelling place of Yahweh (God) used by the children of Israel from the Exodus until the conquest of Canaan. It was constructed of 4 woven layers of curtains and 48 15 foot tall standing wood boards overlayed in gold and held in place by its bars and silver sockets and was richly furnished with valuable materials taken from Egypt at God's orders. Moses was instructed at Mount Sinai to construct and transport the tabernacle with the Israelites on their journey through the wilderness and their subsequent conquest of the Promised Land. After 440 years, Solomon's Temple in Jerusalem superseded it as the dwelling-place of God. 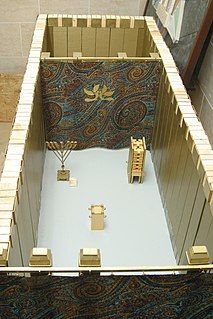 The Holy of Holies is a term in the Hebrew Bible which refers to the inner sanctuary of the Tabernacle where God's presence appeared. According to Hebrew Tradition, the area was defined by four pillars which held up the veil of the covering, under which the Ark of the Covenant was held above the floor. The Ark according to Hebrew Scripture contained the Ten Commandments, which were given by God to Moses on Mount Sinai. King Solomon built the Temple in Jerusalem, where the Ark of the Covenant was supposed to be kept. 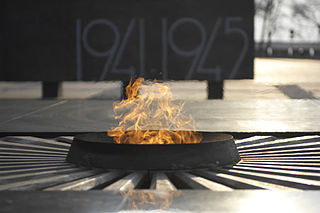 A candlestick, chamberstick, or candelabrum is a device used to hold a candle in place. 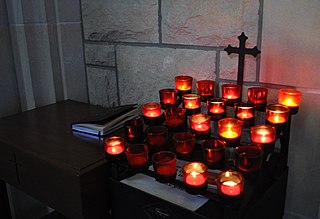 The Hanukkah menorah, also chanukiah or hanukkiah, is a nine-branched candelabrum lit during the eight-day holiday of Hanukkah, as opposed to the seven-branched menorah used in the ancient Temple or as a symbol.

Easter Vigil, also called the Paschal Vigil or the Great Vigil of Easter, is a service held in traditional Christian churches as the first official celebration of the Resurrection of Jesus. Historically, it is during this service that people are baptized and that adult catechumens are received into full communion with the Church. It is held in the hours of darkness between sunset on Holy Saturday and sunrise on Easter Day – most commonly in the evening of Holy Saturday or midnight – and is the first celebration of Easter, days traditionally being considered to begin at sunset. 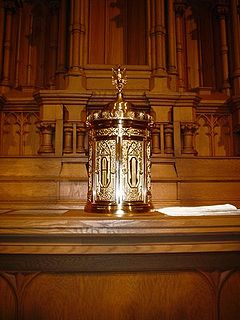 A tabernacle is a fixed, locked box in which, in some Christian churches, the Eucharist is "reserved" (stored). A less obvious container for the same purpose, set into a wall, is called an aumbry.

In many Christian churches there is an altar lamp, also known as a chancel lamp, which is found in the chancel (sanctuary), either hanging or fixed. In Anglican, Old Catholic and Roman Catholic churches, the chancel lamp burns before a tabernacle or ambry to demonstrate the belief that Christ is present there through His Real Presence, as the Blessed Sacrament is reserved in these denominations. It is also found in the chancel of Lutheran and Methodist churches to indicate the presence of Christ in the sanctuary, as well as a belief in the Real Presence of Christ in the Eucharist. The sanctuary lamp may also be seen in Eastern Orthodox Churches. Other Christian denominations burn the lamp to show that the light of Christ always burns in a sin-darkened world.

A lampadarius, plural Lampadarii, from the Latin "lampada", from Ancient Greek "lampas" λαμπάς (candle), was a slave who carried torches before consuls, emperors and other officials of high dignity both during the later Roman Republic and under the Empire. Lampadarios in the post-Byzantine period designates the leader of the second (left) choir of singers in the Eastern Orthodox church practice.

The altar of repose is an altar where the Communion hosts consecrated on Maundy Thursday during the Mass of the Lord's Supper are placed, or "reserved", for use on the following day, Good Friday. The altar can be found in Roman Catholic, Anglican, and some Lutheran churches. Good Friday is the day on which the death of Christ is observed. His Resurrection is not observed until Easter Sunday and the anticipatory Easter Vigil on Holy Saturday. Between the time of his death and resurrection, mass is not celebrated, and so communion hosts cannot be consecrated. Any hosts used on Good Friday must have been consecrated previously.

Altar candles are candles set on or near altars for religious ceremonies. Various denominations have regulations or traditions regarding the number and type of candles used, and when they are lit or extinguished during the services.

The aish tamid is the eternal flame that was to burn upon the altar in the Temple in Jerusalem and never be extinguished. It is not to be confused with the Ner tamid, the eternal light that is kept in front of the Holy Ark in the synagogue. In modern Jewish practice, the aish tamid is symbolically kept alive through daily prayer and the study of Torah.

Miracle of the cruse of oil is an Aggadah depicted in the Babylonian Talmud as one of the reasons for Hanukkah. The story of the miracle, as described in the Talmud, occurred after the liberation of the Temple in Jerusalem during the Maccabean Revolt, and describes how the finding of a jug of pure oil that was to be enough to light the lamp for one day; instead, it lasted for eight days.