Thommankuthu (Malayalam : തൊമ്മന്‍കുത്ത്) is a waterfall located in Thodupuzha Thaluk in Idukki District of the southern state of Kerala, India. It is popular tourist spot in the state and one the major centres of eco-tourism in Kerala. It situated in the southern part of Western Ghats mountain range.Thomankoothu waterfalls is not a single waterfall but a series of 12 falls over a distance of 5km. [1]

Thommankuthu is located 18 km from Thodupuzha. Nearest towns are Karimannor and Vannappuram and Udumbannoor which are nearly 10 km from Thommankuthu.

Thommankuthu waterfall is a seven - step waterfall located in forest. A trek of 12 km through the forests is possible. 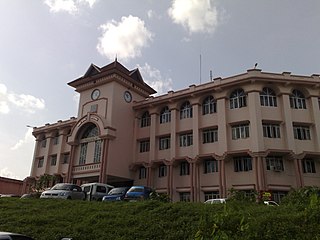 Thodupuzha (തൊടുപുഴ) is a municipality in Idukki district in the Kerala state of India, spread over an area of 35.43 km2. Thodupuzha is 57 km (35 mi) from Kottayam and 62 km (39 mi) south east of Kochi. Thodupuzha is 200 km from the state capital, Trivandrum. Geographical classification of Thodupuzha Region is Malanad or Idanad.

Idukki is one of the 14 districts of Kerala state, India, created on 26 January 1972 bifurcating Kottayam District. At that time, the district headquarters was at Kottayam. In June 1976 it was moved to Painavu. Idukki lies in the Western Ghats of Kerala. Idukki is the second largest district in area but has the lowest population density. Idukki has a vast forest reserve area; more than a half of the district is covered by forests. The urban areas are densely populated whereas villages are sparsely populated. Idukki is also known as the spice garden of Kerala. 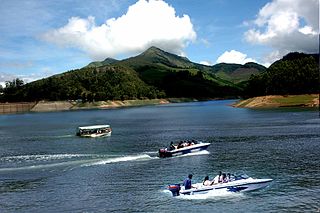 Thekkady is a town near Periyar National Park, an important tourist attraction in the Kerala state of India.

Thenmala is a town of tourist attraction near Punalur town, Kollam district in Kerala, India.

The Syro-Malabar Catholic Eparchy of Kothamangalam is an East Syriac Catholic eparchy in India, under the Syro-Malabar Catholic Church. It was established by Pope Pius XII in 1957. Mar Mathew Pothanamuzhy was the first bishop of the eparchy. Mar George Punnakottil served as the bishop until 10 January 2013, when his resignation was accepted by the synod. He was succeeded by Mar George Madathikandathil.

Karimannoor is a panchayat, earlier it was a Legislative Constitutancy, belonging to Thodupuzha Thaluk in Idukki District, Kerala, India. The main occupation of the population is Agriculture, predominantly of natural rubber. Demographically people belonging to Christian, Hindu and Muslim religions live harmoniously in this beautiful piece of land in God's very Own Country. The predominant community here is the Syro-Malabar Catholic Christians.

Thodupuzha River has its origins in the Thodupuzha Taluk in the Idukki district of Kerala, India, and is a tributary of the Muvattupuzha river. The river is one of the few in the state that does not become dry in the summer as the outflow from the Idukki hydro-electric project is drained into this river via Kanjar river. The town Thodupuzha is on the banks of this river, hence it got the name Thodupuzha.

Kulathupuzha is a village in the eastern part of Kollam district of Kerala state, India. This town is situated on the Kollam – Shenkottai National Highway road. Kulathupuzha is 63 km away from Thiruvananthapuram and 58 km away from Kollam. Thenmala eco tourism is just 9 km away. It is one of the most modern dairy farms situated in Kulathupuzha i.e. indo Swiss project.

Lakkom Water Falls, also known as Lakkam Waterfalls, is a tourist attraction located near Marayoor in the Idukki district of Kerala. These falls are part of the Eravikulam stream, which is a part of Eravikulam National Park and is one of the major tributaries of the Pambar River.

Manathoor is a small village in Kottayam district, aside Pala - Thodupuzha Highway, 12 km from Palai town and 15 km from Thodupuzha town.

Illikkal Kallu is a monolith located on top of the Illickal Malaa in the Kottayam district of Kerala, India. Situated at around 6000 feet above sea level, Illickal Kallu is a major tourist attraction in Moonnilavu and Thalanadu village of Meenachil taluk. Only one half of the original rock remains, as the other half of the rock has fallen off. The nearest town is Teekoy. Numerous mountain streams originate from this peak and flow down to form the Meenachil River. Tourists must trek <1 km to reach the summit of the peak.

Moolamattom is the headquarters of Arakulam Panchayath in Thodupuzha Taluk, Idukki district in Kerala, India. It lies 22 km from Thodupuzha, on the banks of the Thodupuzha River. A lot of south Indian language movies are filmed here. It is also the site of the Moolamattom Power Station, the biggest underground Hydro-electric power station in India.

Ilaveezhapoonchira is a tourist destination located in Melukavu village in Kottayam district near Kanjar. Ilaveezha Poonchira is surrounded by three enchanting hillocks - Mankunnu, Kodayathoormala and Thonippara. This makes the place ideal for trekking.

Meenuliyan Para or Meenulinjan para is a mountain peak situated near Thodupuzha in Idukki district, in the Indian state of Kerala. 'Para' in Malayalam language means a rock. Meenuliyan para is noted for a huge rock that rises more than 4000 feet and has about two acres of evergreen forest on top of it. The rock itself covers an area more than 500 acres. The surface of this huge rock mountain looks like fish scales and hence the mountain gets the name ‘ Meenuliyan Para’. The lofty peaks of the Meenuliyan para are covered in mist on rainy days but on a fine day the lower Periyar area, Bhoothathankettu and even Ernakulam are visible from these heights. Meenuliyan para is located 47 km from Muvattupuzha and 51 km from Thodupuzha. Meenuliyan para can be reached only by a pedestrian path for about 3 km from Pattayakkudy, in Vannappuram Panchayath in Idukki district. Cochin Port and parts of Thrissur district can also be seen from top of the Meenuliyan para.

Malankara dam is a gravity dam constructed across Muvattupuzha river for irrigation purposes. The dam is constructed to make use of the tail water from the Moolamattom power house. The project is run under the Muvattupuzha Valley Irrigation Project and KSEB. The artificial lake covers an area of around 11 square km.

Sree Krishna Swami Temple is a Hindu temple situated at the heart of Thodupuzha town in Idukki district in the Indian state of Kerala. It is located on the banks of Thodupuzhayar, a tributary of river Muvattupuzha. Lord Krishna presides there in the form of Navaneetha Krishna who holds butter in his right pam. The tantric rights of the temple is held by the Aramallur Kavanattu Mana. The Poojas are conducted by two mutts named as 'Padinjare mutt' and 'Thuruthel mutt'.

Sree Subramanya Swami Temple, also known by the name 'Malayala Palani', is located in Olamattom near Thodupuzha in Idukki district in the Indian state of Kerala. It is situated at a height of 500 ft (150 m) above mean sea level. Lord Muruga presides there in the form 'Bala Subramanya'.