Thusharagiri Falls is a waterfall located in Kozhikode district in the Indian state of Kerala, India.

Two streams originating from the Western Ghats meet here to form the Chalippuzha River. The river diverges into three waterfalls creating a snowy spray, which gives the name, 'Thusharagiri' a word which means the snow-capped mountain. Of the three waterfalls, the highest is the Thenpara, falling from an altitude of 75 metres (246 ft). The other two are the Erattumukku falls and Mazhavil Chattam falls. [1] [2]

Thusharagiri bridge is located at Chalippuzha near thusharagiri waterfalls. This is one of the tallest arch bridge in Kerala.

Ponmudi is a hill station in the Peringamala Panchayat of Trivandrum District of Kerala in India. It is located 53 km north-east of Trivandrum City, 78 km south-east of Varkala Beach and 69 km north-east of Kovalam Beach at an altitude of 1,100 m (3,600 ft). Ponmudi (Varayadumotta) peak is a part of the Western Ghats mountain range that runs parallel to the Arabian Sea. Ponmudi is also called Kashmir of Kerala and is a popular honeymoon destination in South India. The normal temperature of Ponmudi is between 18 and 25 °C. 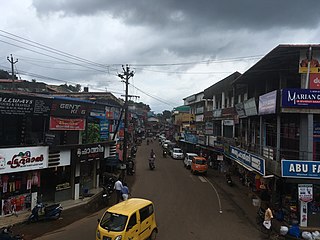 Feroke is a Municipality and a part of Kozhikode metropolitan area under Kozhikode Development Authority (K.D.A) in the Kozhikode district of the Indian state of Kerala. 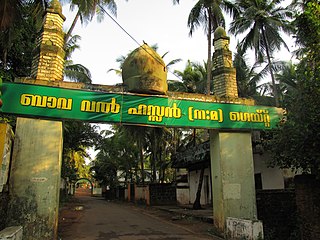 Bekal is a small town in the Kasaragod district on the West coast of the state of Kerala, India.

Kavvayi is a group of small islands, near Payyannur in the Kannur district of Kerala state in India. The island is connected to Payyannur by a small bridge on the Kavvayi River. 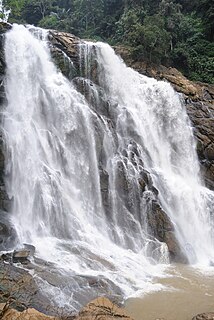 Meenmutty Falls is located 29 km from Kalpetta in Wayanad District in the state of Kerala, India. It is a three-tiered waterfall with a height of 300 metres. Meenmutty is a combination of Malayalam words Meen (fish) and Mutty (blocked). Meenmutty Falls can be accessed from Mananthavady - Kuttiady road . Meenmutty waterfalls are dangerous during rainy seasons due to high inflow and many people havedrowned since 1991. Meenmutty falls is surrounded by Lush green tea plantations making the hike to the falls a memorable experience to the tourists.

Kodenchery is a town in Kozhikode district in the state of Kerala, India.

Nellipoyil is a village and is part of Kodancherry Panchayat in Kozhikode district in the state of Kerala, India. Nearest Places are Kodencheri, Thiruvambady, Thamarassery, Thusharagiri Falls. It is under Thiruvambady Assembly Constituency. Areeppara and Thusharagiri are the main tourist spots in Nellipoyil village, Kerala. Two streams originating from the Western Ghats meet in Thusharagiri to form the River Challipuzha and the river has three waterfalls in it: two of which are in the forest and the third right at the border of the forest. The other river, Iruvanjipuzha of the Ennu Ninte Moideen movie fame, has two waterfalls: Arippara and Pathankayam, with both being utilized for hydro electric projects also. Both are famous tourist attractions.

Thamarassery, formerly known as Thazhmalachery, is a major town and bishopric in the Kozhikode district of Kerala, India, 30 km east of Kozhikode (Calicut) City and 29 km east of Koyilandy. It lies on the Calicut - Wayanad - Mysore route.

Thommankuthu is a waterfall located in Thodupuzha Thaluk in Idukki District of the southern state of Kerala, India. It is a popular tourist spot in the state and one of the major centres of eco-tourism in Kerala. It is situated in the southern part of Western Ghats mountain range. Thomankoothu waterfalls is not a single waterfall but a series of 12 falls over a distance of 5 km.

Nettur is a village segment which comes under the jurisdiction of Thalassery municipality, in the state of Kerala, India. It is situated in North Thalassery en route to Kannur via NH 17. The Anjarakandi-Thalassery state Highway passes through Nettur. Nettur is picturesquely nestled between the Kuyyali and Anjarakandi rivers.

Pullurampara, is a village situated near the town of Thiruvambady in the Calicut district of the Indian state of Kerala. It is approximately 42 km from Calicut and is in two panchayats, Thiruvambady and Kodencheri. Iruvanjippuzha river flows through Pullurampara. The two main junctions in Pullurampara are Pallippadi and Pullurampara valiyangaadi. St. Alphonsa Playground is the main Park. St. Joseph's Church is located in Pallippadi.

Areekode is a town on the banks of the Chaliyar River in Malappuram district India. Areekode was part of the Malabar district in British India. 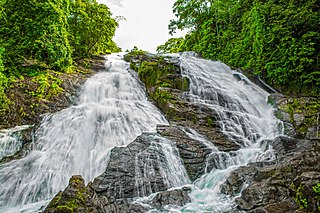 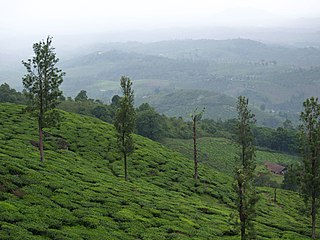 Meppadi is a town in the Indian state of Kerala. It is an extremely scenic hill station on the State Highway between Kozhikode and Ooty. The nearest city is Kalpetta which is the headquarters of the Wayanad revenue district.

Meenangadi is an old town situated on the highway NH 766 between Kalpetta and Sulthan Bathery in Wayanad District, in Kerala, India. This place is one among the Provinces where the existence of Dolmens provide an historical evidence of earlier civilisation. Coffee bean, Black pepper, Ginger, Rice and Areca are the major crops cultivated in this area. Meenangadi is famous for its Fish Market and Cattle Market.The nearest railway station is at Kozhikode at 87 km and airport is Kannur International Airport with 94 km from Meenangadi. Meenangadi is surrounded by, Ambalavayal Panchayat, Kalpetta Taluk towards west, Gudalur Taluk towards East, Mananthavady Taluk towards west. Kalpetta, Sultan Bathery, Kozhikode are the nearby Cities and towns to Meenangadi.
Kerala's first carbon neutrality project launched in Meenangadi on June 2016. Upon achieving the goals of the project, Meenangadi will be the first village in India to go completely carbon neutral. Meenangadi has a population of 33450 According to 2011 Census with two Villages Purakkadi and (Part)Krishnagiri.