The Three Sisters were formed by land erosion around 200 million years ago during the Triassic period when the sandstone of the Blue Mountains was eroded over time by wind, rain and rivers, causing the cliffs surrounding the Jamison Valley to be slowly broken up.

When the Blue Mountains were covered in seawater, the ocean carried large amounts of sediment that gradually sunk to the floor in crosswise layers. These layers later created rock beds and shales. Around 200 million years ago, volcanoes erupted through the coal, sandstone and shale layers, forming the ridges and the shape of the Three Sisters. [4]

The commonly told legend of the Three Sisters is that three sisters, Wimalah, Meeni, and Gunedoo, [5] lived in the Jamison Valley as members of the Katoomba tribe. They fell in love with three men from the neighbouring Nepean tribe, but marriage was forbidden by tribal law. The brothers were not happy to accept this law and so decided to capture the three sisters. A major tribal battle ensued, and the sisters were turned to stone by an elder to protect them, but he was killed in the fighting and no one else could turn them back.

This legend is commonly claimed to be an Indigenous Australian Dreamtime legend. [6] However, the legend as is commonly told may be traced back to non-indigenous 16-year-old schoolgirl Patricia Stone, who gave the formations their "indigenous" names. [7] [8]

The Aboriginal traditional owners, the Gundungurra, have a different legend that includes the Sisters rock formation. [9]

The Three Sisters were declared an Aboriginal Place in January 2014, making it the 98th place in New South Wales to be declared as such. [3]

From nearby Echo Point, a bushwalking trail leads to the Three Sisters and down to the valley floor via more than 800 well-maintained steel and stone steps called "the Giant Stairway". Then a 1.5-hour walk on The Federal Pass trail leads to the base of Katoomba Falls and the Katoomba Scenic Railway. Walkers who don't wish to climb back to the top can take the Scenic Railway back to the plateau for a fee.[ citation needed ] 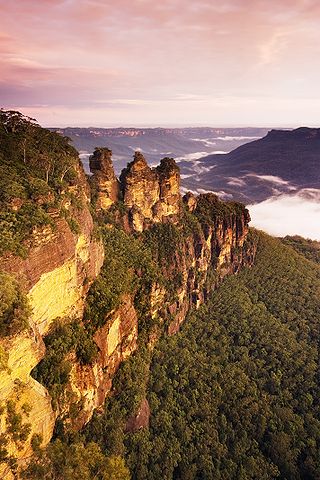 The Blue Mountains are a mountainous region and a mountain range located in New South Wales, Australia. The region is considered to be part of the western outskirts of the Greater Sydney Region, The region borders on Sydney's main metropolitan area, its foothills starting about 50 kilometres (31 mi) west of centre of the state capital, close to Penrith on the outskirts of Greater Sydney region. The public's understanding of the extent of the Blue Mountains is varied, as it forms only part of an extensive mountainous area associated with the Great Dividing Range. As defined in 1970, the Blue Mountains region is bounded by the Nepean and Hawkesbury rivers in the east, the Coxs River and Lake Burragorang to the west and south, and the Wolgan and Colo rivers to the north. Geologically, it is situated in the central parts of the Sydney Basin.

Katoomba is the chief town of the City of Blue Mountains in New South Wales, Australia, and the administrative headquarters of Blue Mountains City Council. The council's understanding is that Katoomba is located on the lands of the Dharug and Gundungurra Aboriginal peoples. Katoomba is situated on the Great Western Highway, Katoomba is also known as a suburb of Greater Sydney but is known as a town which is home to the three sisters, 102 km (63 mi) west of Sydney Central Business District and 39 km (24 mi) south-east of Lithgow. Katoomba railway station is on the Main Western line. 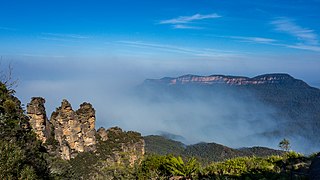 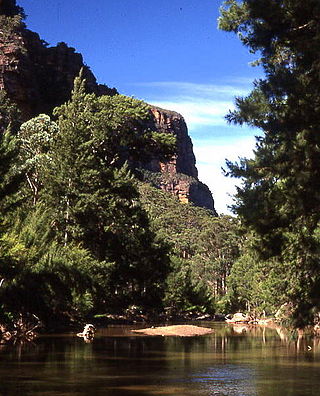 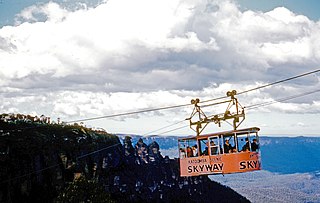 Megalong Valley is part of the Blue Mountains of New South Wales, Australia. It is located west of Katoomba. On its eastern side, the valley is separated from the Jamison Valley by Narrow Neck Plateau. The Shipley Plateau overlooks part of the valley. 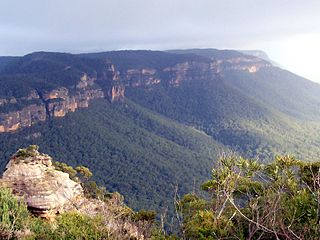 The Narrow Neck Plateau, an eroded remnant of a sandstone layer situated at an elevation of 1,000 metres (3,300 ft) above sea level that is part of the Blue Mountains Range which is a spur line off the Great Dividing Range, is situated immediately south-west of Katoomba in New South Wales, Australia, located within the Blue Mountains National Park. The neck separates the Jamison Valley from the Megalong Valley. 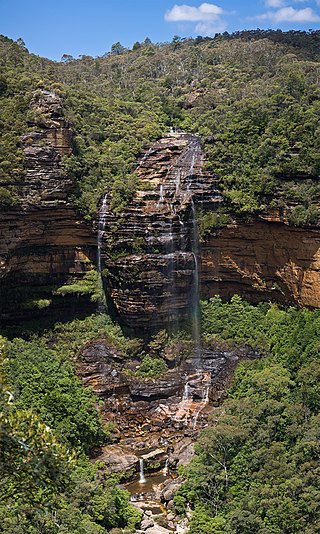 Wentworth Falls is a town in the Blue Mountains region of New South Wales, situated approximately 100 kilometres (62 mi) west of the Sydney central business district, and about 8 kilometres (5.0 mi) east of Katoomba, Australia on the Great Western Highway, with a Wentworth Falls railway station on the Main Western line. The town is at an elevation of 867 metres (2,844 ft) AHD . At the 2016 census, Wentworth Falls had a population of 6,076.

In Australian Aboriginal mythology of the Bundjalung, an area known as "the land of the three rivers, "the Dirawong, an unseen spiritual creature also known as the goanna spirit, is one of the Creator Beings of the Bundjalung, that 1) Protects 2) Guards, 3) Battles the Rainbow Snake, 4) Helps the people with,

Catalina Park is a disused motor racing venue, located at Katoomba, in the Blue Mountains, New South Wales, Australia, and is recognised as an Aboriginal Place due to the long association of the local Gundungarra and Darug clans to the area. 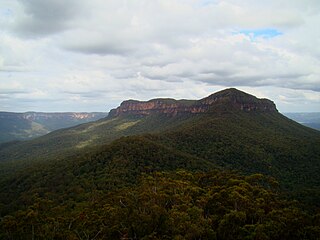 The Ruined Castle is a rock formation in the Jamison Valley area of the Blue Mountains, in New South Wales, Australia. 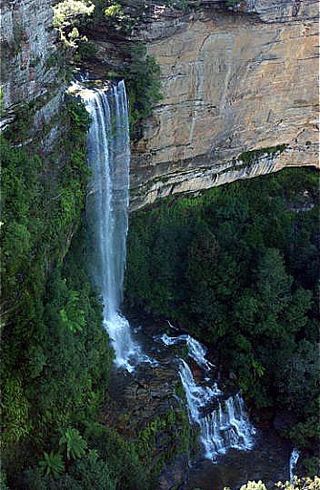 The Kedumba River, a perennial river that is part of the Hawkesbury-Nepean catchment, is located in the Blue Mountains and Macarthur regions of New South Wales, Australia. 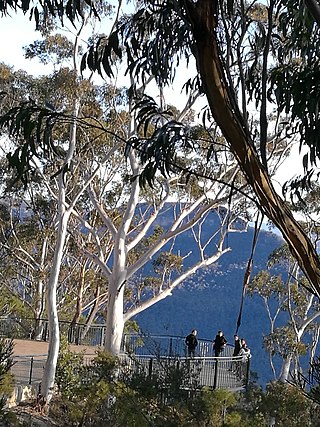 Echo Point is a lookout about 2 kilometres (1.2 mi) south of Katoomba, New South Wales, Australia. It attracts an estimated 1.5–2 million visitors each year. The lookout offers a view to Three Sisters, Mount Solitary and the rock formation known as the Ruined Castle. A short walk from Echo Point leads to The Giant Stairway which provides access to a number of nature walks through Jamison Valley.

Wikimedia Commons has media related to Three Sisters .
This page is based on this Wikipedia article
Text is available under the CC BY-SA 4.0 license; additional terms may apply.
Images, videos and audio are available under their respective licenses.