The United Democratic Movement (UDM) is a centre-left, social-democratic, South African political party, formed by a prominent former National Party leader, Roelf Meyer (who has since resigned from the UDM), a former African National Congress and Transkei homeland leader, General Bantu Holomisa, and a former ANC Executive Committee member, John Taylor. It has an anti-separatist, pro-diversity platform; and supports an individualist South Africa with a strong moral sense, in both social and economic senses.

Along with the much larger Democratic Alliance (DA) and other smaller parties, the UDM is currently part of the governing coalition in Johannesburg, South Africa's largest Metropolitan municipality.

Mongameli Bobani was the Executive Mayor of the Nelson Mandela Bay Metropolitan Municipality from 2018 to 2019 and the first mayor from the UDM since the party governed King Sabata Dalindyebo Local Municipality (2000-2002).

During his testimony at the Truth and Reconciliation Commission (TRC), Holomisa made reference to a possible bribe that was paid to the former Prime Minister of Transkei, Chief George Matanzima and Miss Stella Sigcau, the then incumbent Prime Minister. Holomisa was expelled from the ANC because of these allegations. In November 1996 Holomisa publicly announced consulting South Africans on the need or not for a new political party. With this objective, the National Consultative Forum (NCF) was established on 8 February 1997.

Roelf Meyer left the National Party on 17 May 1997, along with fellow politicians Nilo Botha, Takis Christodoulou, Kobus du Plessis, and Annelizé van Wyk, some of whom had resigned their seats in the Gauteng Legislature. At a three-day strategic planning conference in May 1997, it was decided that a political movement should be established capable of unifying people around shared values across racial, historical, ideological and social dividing lines. The New Movement Process (NMP) was then established.

Bantu Holomisa and Roelf Meyer (who had met with Meyer still representing the National Party to discuss the process for a new movement) again met at Loftus Versveld, in mid-1997, to discuss working together and agreed in principle to explore the possibility of formal cooperation. A Joint Committee (JC) between the NCF and the NMP was formed to look into matters of common interest. The JC amalgamated its two (NCF and NMP) technical support teams into a Technical Committee (TC) to act as its executive body to implement the brief of the JC. This was to “look into matters of common interest between the two sides… consider… the establishment of a new party at an appropriate time… (and) in regard to the latter question… (investigate) matters of strategy, time scales, policy and funding”. The TC was jointly chaired by Kobus du Plessis (NMP) and Joel Mafenya (NCF) and its first meeting took place at the Carlton Hotel on 22 June 1997. After a joint strategic session at the Vaal Dam in July 1997 it was agreed that a new political party should be formed. The United Democratic Movement was launched at the World Trade Centre, in Kempton Park, on 27 September 1997. [1] Bantu Holomisa was elected the party's first president at its first national congress in June 1998.

As one of several newcomer parties, UDM was among the most successful in the 1999 general election; the party garnered 3,4% and earned seats in 6 of the 9 provincial legislatures. It also became the official opposition in the Northern Province and its stronghold, the Eastern Cape.

In the 2000 municipal elections, the UDM won control of the King Sabata Dalindyebo Local Municipality. The party lost the council during the floor crossing period, however, and this would begin a time of decline; In the 2004 general election, 9 members were elected to the National Assembly, 5 fewer than were elected in the 1999 election. The UDM lost its position as the official opposition in the Eastern Cape after two of its members in the Eastern Cape Legislature had defected to the splinter United Independent Front in 2005.

On October 8, 2008, the UDM announced its kickoff of the 2009 general election campaign. It also welcomed over 300 former members of the ANC who had left their former party following the deposition of former president Thabo Mbeki in September 2008. So far almost 1000 [2] [3] former African National Congress members have joined the party since the ANC recalled President Thabo Mbeki and replaced him with Kgalema Motlanthe. Nevertheless, the election would continue the downward trend of the UDM, with the party retaining only 4 MPs with 0,8% of the vote and losing its representation in all provinces except the Eastern Cape, where it was pushed into fourth place.

In 2014, a faction of the Congress of the People led by Mbhazima Shilowa joined the UDM. [4] This helped to strengthen the party in its Eastern Cape stronghold, where it likely gained support from many previous COPE supporters. In the 2014 general elections, UDM support remained at very low levels in eight of the provinces, and it failed to re-establish itself nationally, but made a convincing rebound in the Eastern Cape, where it overtook COPE to become the third-largest party. The increase was especially convincing in the King Sabata Dalindyebo region. However, this new growth had largely evaporated by the time of the 2016 local elections. 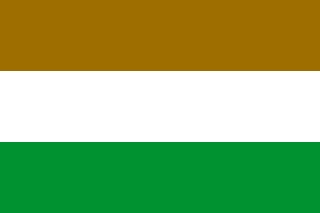 Transkei, officially the Republic of Transkei, was an unrecognised state in the southeastern region of South Africa from 1976 to 1994. It was a Bantustan—an area set aside for black South Africans of Xhosa descent—and operated as a nominally independent parliamentary democracy. Its capital was Umtata.

General elections were held in South Africa on 2 June 1999. The result was a victory for the governing African National Congress (ANC), which gained fourteen seats. Incumbent president Nelson Mandela declined to seek re-election as president on grounds of his age. This election was notable for the sharp decline of the New National Party, previously the National Party (NP), which without former State President F.W. de Klerk lost more than half of their former support base. The liberal Democratic Party became the largest opposition party, after being the fifth largest party in the previous elections in 1994. The number of parties represented in the National Assembly increased to thirteen, with the United Democratic Movement, jointly headed by former National Party member Roelf Meyer, and former ANC member Bantu Holomisa, being the most successful of the newcomers with fourteen seats.

Chief Kaiser Daliwonga Mathanzima, misspelled Matanzima, was the long-term leader of Transkei. In 1950, when South Africa was offered to establish the Bantu Authorities Act, Matanzima convinced the Bunga to accept the Act. The Bunga were the council of Transkei chiefs, who at first rejected the Act until 1955 when Matanzima persuaded them.

Bantubonke The General Harrington Holomisa is a South African Member of Parliament and President of the United Democratic Movement. 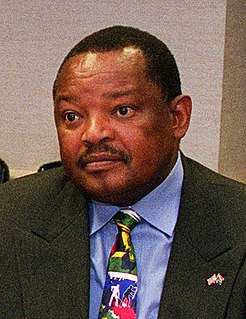 Mosiuoa Gerard Patrick Lekota is a South African politician, who currently serves as the President and Leader of the Congress of the People since 16 December 2008.

Roelof Petrus Meyer is a South African politician and businessman. Originally a member of the National Party, he is known for his prominent role in the negotiations to end the apartheid system in South Africa. He later co-founded the United Democratic Movement.

The Congress of the People (COPE) is a South African political party formed in 2008 by former members of the African National Congress (ANC). The party was founded by former ANC members Mosiuoa Lekota, Mbhazima Shilowa and Mluleki George to contest the 2009 general election. The party was announced following a national convention held in Sandton on 1 November 2008, and was founded at a congress held in Bloemfontein on 16 December 2008. The name echoes the 1955 Congress of the People at which the Freedom Charter was adopted by the ANC and other parties, a name strongly contested by the ANC in a legal move dismissed by the Pretoria High Court.

Chief George Mzimvubu Mathanzima was a leader of the Transkei bantustan in South Africa, a young brother of Kaiser Mathanzima and a nephew of Nelson Mandela. He and his brother, Kaiser co-founded and led the Transkei National Independence Party. Mathanzima was appointed as Prime Minister of Transkei after his brother became President. He served as Prime Minister from 20 February 1979 to 24 September 1987. Bantu Holomisa forced his resignation and exile in October 1987. Stella Sigcau succeeded him as Prime Minister, but Holomisa forced her out of office and took power himself in December 1987.

Jongilizwe College was a school in Tsolo, Transkei, South Africa which served the sons of Chiefs and Headmen from the Transkei bantustan.

Khanyisile Litchfield-Tshabalala is a former South African Navy admiral. She later became a Member of Parliament for the Economic Freedom Fighters.

The Electoral Commission of South Africa (IEC) announced on 20 March 2019 that a record number of 48 parties had registered candidates for the national parliamentary election. This is 19 more parties that contested the 2014 national elections. In the provincial legislature elections, the total number of parties registering candidates were:

Nqabayomzi Lawrence Saziso Kwankwa is a South African politician from the Eastern Cape. He has been serving as a Member of the National Assembly of South Africa for the United Democratic Movement (UDM) since August 2013. He is the deputy president of the UDM and the party's chief whip.

Gerhardus Willem Koornhof is a South African politician and economist who serves as the Parliamentary Counsellor to President Cyril Ramaphosa. When Ramaphosa served as deputy president, Koornhof was his parliament counsellor. An MP since 1994, Koornhof currently represents the African National Congress, though he previously represented United Democratic Movement between 1999 and 2003 and the National Party/New National Party before that.

The Committee for Section 194 Enquiry is an Adhoc committee of the National Assembly of South Africa that was established on 7 April 2021 to determine if there are grounds for the removal of Advocate Busisiwe Mkhwebane as Public Protector.