Blackwell Island (known as Welfare Island from 1921 to 1973; now Roosevelt Island) is located in the middle of the East River, within the modern borough of Manhattan. The island was purchased by the city government in 1828. Various facilities on the island were built including a penitentiary, almshouse, city hospital, the New York Lunatic Asylum, and the Smallpox Hospital. [7]

In 1872, the City of New York built a lighthouse. The supervising architect was James Renwick Jr., who also designed several other buildings on the island for the Charities and Correction Board as well as more famous works such as St. Patrick's Cathedral. [4] [5] [6]

Legends abound about the construction of the lighthouse. Two names, John McCarthy and Thomas Maxey, are associated with the various legends. The 1870 report of the warden of the lunatic asylum indicated that an industrious patient had built a seawall near the Asylum that had reclaimed land. The legends indicate that an inmate of the asylum built a fort to defend the island against a British invasion that he feared. Some versions indicate that he had incorporated Civil War cannons. The legend indicates that the builder was bribed with bogus money to demolish the fort for the construction of the lighthouse. Other stories indicate that an Asylum inmate constructed the lighthouse. [4] [5] [6] For many years, a saying was inscribed on a stone near the lighthouse: [3] [4] [5] [6] [8]

This is the work Was done by John McCarthy Who built the Light House from the bottom to the Top All ye who do pass by may Pray for his soul when he dies.

The lighthouse was operated by the City instead of the U.S. Lighthouse Board. In its 1893 annual report, the Lighthouse Board generally praised the operations of Blackwell Island Lighthouse, but indicated that the Board had been unfairly criticized because of the City's occasional failure to keep the light in operation. The Board advocated banning private lights. [9] The 1917 U.S. Coast Pilot indicated that there was a private light at the north end of the island. [10]

The lighthouse is approximately 50 feet (15 m) tall. It is constructed of gray gneiss, rough ashlar that was quarried on the island by inmates from the penitentiary. It has an octagonal base and an octagonal shaft. There is an entrance on the south side under a projecting gable and a pointed Gothic arch. Two south-facing slit windows in the shaft light the interior. At the top of the shaft there is a band of ornamented corbels below the gallery, which is surrounded by an iron railing. The lantern is octagonal with a shallow conical roof. An 1893 photograph [11] and a 1903 movie [12] show that it probably had a much taller, steeper conical cap when it was built. The optics were provided by the U.S. Lighthouse Board. [8] 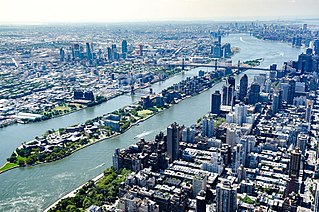 The Fire Island Lighthouse is a visible landmark on the Great South Bay, in southern Suffolk County, New York on the western end of Fire Island, a barrier island off the southern coast of Long Island. The lighthouse is located within Fire Island National Seashore and just to the east of Robert Moses State Park. It is part of the Fire Island Light Station which contains the light, keepers quarters, the lens building containing the original first-order Fresnel lens, and a boat house.

Execution Rocks Light is a lighthouse in the middle of Long Island Sound on the border between New Rochelle and Sands Point, New York. It stands 55 feet (17 m) tall, with a white light flashing every 10 seconds. The granite tower is painted white with a brown band around the middle. It has an attached stone keeper's house which has not been inhabited since the light was automated in 1979.

The Cape Henry Lighthouse is a lighthouse at Cape Henry, the landform marking the southern entrance to Chesapeake Bay in the U.S. state of Virginia. The location has long been important for the large amount of ocean-going shipping traffic for the harbors, its rivers, and shipping headed to ports on the bay. The original lighthouse was the first authorized by the U.S. government, dating from 1792. It was also the first federal construction project under the Constitution, for an original contract amount of $15,200. A second lighthouse was built and completed in 1881 a short distance away after concern arose about the stability of the first. Both towers of the light station were designated a National Historic Landmark in 1970.

Race Rock Light is a lighthouse on Race Rock Reef, a dangerous set of rocks on Long Island Sound southwest of Fishers Island, New York and the site of many shipwrecks. It is currently owned and maintained by the New London Maritime Society as part of the National Historic Lighthouse Preservation Act program.

The Robbins Reef Light Station is a sparkplug lighthouse located off Constable Hook in Bayonne, Hudson County, New Jersey, United States, along the west side of Main Channel, Upper New York Bay. The tower and integral keepers quarters were built in 1883. It replaced an octagonal granite tower built in 1839. The U.S. Coast Guard owned and operated the light station until the 2000s. 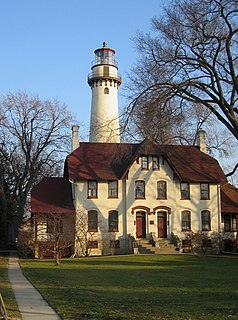 The historic Grosse Point Light is located in Evanston, Illinois. Following several shipping disasters near Evanston, residents successfully lobbied the federal government for a lighthouse. Construction was completed in 1873. The lighthouse was added to the National Register of Historic Places on September 8, 1976. On 20 January 1999, the lighthouse was designated a National Historic Landmark. It is maintained under the jurisdiction of the Evanston Lighthouse Park District, an independent taxing authority.

Falkner Island Light, also known as the Faulkner Island Lighthouse, is a lighthouse in Connecticut, United States, on Falkner Island which is off Guilford Harbor on Long Island Sound. The lighthouse was constructed in 1802 and commissioned by President Thomas Jefferson. The lighthouse has had three keeper's houses: the original house of 1802 was rebuilt in 1851 and then again in 1871. The 1871 keeper's house survived to 1976, when it was destroyed by fire; the Coast Guard repaired and automated the lighthouse two years later. A volunteer group, the Faulkner's Light Brigade, has undertaken the restoration and preservation of the lighthouse since 1991, completing the last major restoration work in March 2011. Access to Falkner Island and the light is restricted during the nesting season of the roseate terns from May to August yearly. The Falkner Island Lighthouse, as the second oldest extant lighthouse in Connecticut, is listed on the National Register of Historic Places. 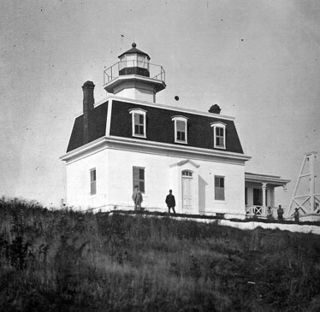 The Staten Island Range Light, also known as the Ambrose Channel Range Light, is the rear range light companion to the West Bank Lighthouse. Built in 1912, the 90-foot tower sits more than five miles northwest of the West Bank Lighthouse, on Staten Island’s Richmond Hill, 141 feet above sea level. It shows a fixed white light that can be seen for 18 miles, by all vessels bound to New York and New Jersey Ports coming in from the Atlantic Ocean.

The Octagon, built in 1834, is a historic octagonal building and attached apartment block complex located at 888 Main Street on Roosevelt Island in New York City. It originally served as the main entrance to the New York City Mental Health Hospital, which opened in 1841. Designed by Alexander Jackson Davis, the five-story rotunda was made of blue-gray stone that was quarried on the island. The Octagon is the last remnant of the hospital, and after many years of decay and two fires, was close to ruin. After restoration, it has now been incorporated into the adjacent buildings to create a large apartment complex.

The New Dorp Lighthouse is a decommissioned lighthouse located in the New Dorp section of Staten Island, New York City. Funds for the lighthouse were approved by United States Congress on August 31, 1852 and the structure was completed in 1856. The lighthouse, built to serve as a rear range light to mark Swash Channel, was built by Richard Carlow, who also built the similar Chapel Hill and Point Comfort Range Lights in New Jersey around the same time. Ships sailing through Swash Channel were instructed to bring the New Dorp range light “in one” and steer towards the lights until the Chapel Hill Light came into view, which would then mark the channel past West Bank.

Old Orchard Shoal Light was a sparkplug lighthouse in lower New York Bay marking a large shoal area. It was destroyed by Hurricane Sandy on October 29, 2012. 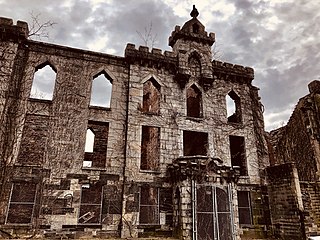 The Smallpox Hospital, sometimes referred to as the Renwick Smallpox Hospital and later the Maternity and Charity Hospital Training School, was a hospital located on Roosevelt Island in Manhattan, New York City. Originally designed by architect James Renwick Jr., the 100-bed hospital opened in 1856, when the area was known as Blackwell's Island.

The old Essex County Jail is located in the University Heights section of Newark, Essex County, New Jersey, United States. The jail is Essex County's oldest public building and a national landmark of value for its architectural and social history. The complex consists of about 20 structures of various size, age, and function ranging in date from the 1830s to 1930s. Collectively, they represent the evolution of American prison history over 100 years. For the quality of its architecture, its social history, and its links to the 1967 Newark Riots, this jail was added to the National Register of Historic Places on September 3, 1991.

The Girl Puzzle Monument honoring activist and journalist Elizabeth Cochrane Seaman, pen name Nellie Bly (1864-1922), is a public sculptural installation by American artist Amanda Matthews, CEO/Partner of Prometheus Art Bronze Foundry and Metal Fabrication. The installation will be located on the northern tip of Roosevelt Island in Lighthouse Park in the Manhattan borough of New York City. The location is significant because of its proximity to the remains of the old Blackwell Island Asylum - The Octagon is the last remnant of the original building where Nellie Bly went undercover as a patient while working as a reporter at the New York World. Nellie Bly wrote of the mistreatment of patients at the asylum in a series of articles and then in 1887 had them compiled into a book, Ten Days in a Mad-House.