Burgess Park is a public park situated in the London Borough of Southwark, in an area between Camberwell to the west, Walworth to the north, Bermondsey to the east and Peckham to the south. At 56 hectares (140 acres), it is one of the largest parks in South London. [1]

Unlike most other parks in London, Burgess Park was carved out of a highly built-up area of the city. Virtually all the land now occupied by the park was previously used for housing, industry and transport infrastructure.

The idea for Burgess Park came out of the 1943 Abercrombie plan for open spaces in London, and the land has been gradually assembled and landscaped over the subsequent decades, first by the London County Council, then the Greater London Council, and since the mid-1980s, the London Borough of Southwark. The earliest component of what is now Burgess Park pre-dates the Abercrombie Plan. This is the King George's Field, opened in 1938 on the site of a former baths and swimming pool, at the Addington Square end of the park. [2]

An important stage in the construction of the park was the closure of the Grand Surrey Canal in the early 1970s, which terminated at Addington Wharf on Camberwell Road. The Canal served the Surrey Commercial Docks, and the area near Camberwell was full of 19th-century streets, houses and industrial buildings (including a R White's ginger beer factory and the Watkins Bible Factory [3] ), many of which had suffered heavy bomb damage during WWII. The stretch of canal now incorporated in the park is the site of Camberwell Wharf, which was virtually straight. Other land incorporated in the park was occupied by housing. While some of this housing was in poor condition, a lot of perfectly serviceable homes were demolished to build the park, and this resulted in strong local feelings about the park.

Named Burgess Park in 1973 (after Councillor Jessie Burgess, Camberwell's first female Mayor), it is still incomplete and contains some former roads which have been stopped up but not yet grassed over. The boundaries of Burgess Park remain a matter of dispute, and because the park is unfinished, it is regularly the subject of proposals [ citation needed ] to build housing, schools, or transport links of the sort that would never be contemplated in one of London's older parks of Victorian origin.

There are a large number of listed buildings in the Park, remnants of the streets which once occupied the site: an early 19th century lime kiln, [4] the Passmore Edwards library, baths and wash houses (the piers and railings of which are separately listed) [5] [6] and the former almshouses in Chumleigh Gardens (which have three separate listings). [7] [8] [9] The whole of the Passmore Edwards building was listed as an asset of community value in 2014. The adjacent former church of St George designed by Francis Bedford, now converted into flats, is also listed; parts of its former churchyard form part of the park. [10] Its war memorial of Christ, head bowed, holding a crown of thorns, by the Danish artist Arild Rosenkrantz, is also listed. [11]

The library, baths and wash houses are occupied by a theatre group Theatre Delicatessen and by the Lynn AC boxing club. [12] An external wall has a large mosaic of a Camberwell Beauty butterfly. The almshouses are occupied by offices and by a café. There are also several bridges, which once used to cross the canal.

Chumleigh Gardens, near the centre of the park, is a World Garden, with plants and landscaping designed to reflect the diversity of the surrounding population of this highly cosmopolitan portion of London. It was established in 1995, in the grounds of the former Female Friendly Society Asylum. [13]

Recent additions to the park include Silent Raid, an art installation by Sally Hogarth commemorating Zeppelin raids on the local area in 1917 [14] and a memorial to locally-born Jack Harvey VC. [15]

There is a thriving Friends of Burgess Park who also have an online heritage project on the park, Bridge To Nowhere. In the past, the park has played host to many festivals, including, in August, the Carnaval Del Pueblo, Europe's largest celebration of Latin American culture.

In 2009, Burgess Park was one of 11 parks throughout Greater London chosen to receive money for redevelopment by a public vote. The park received a grant of £2 million from Boris Johnson, Mayor of London, as part of a London-wide competition, and the money was used to install better footpaths, additional lighting, refurbished public toilets and new play areas for children. [16] Subsequent plans existed to top this up to £6 million by Southwark Council, to ensure the renovation of the space. 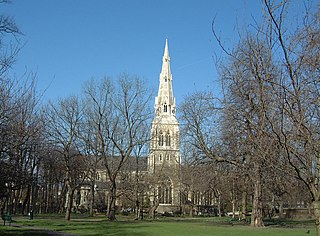 Camberwell is a district of South London, England, within the London Borough of Southwark. It is located 2.7 miles (4.3 km) southeast of Charing Cross. 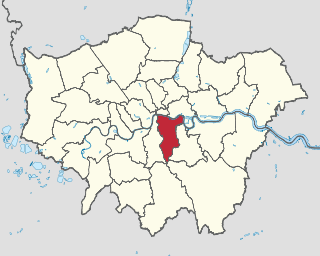 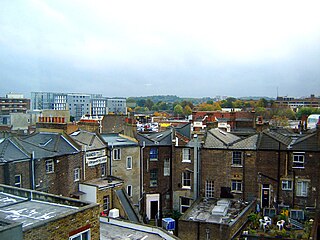 Peckham is a district of south London, England, within the London Borough of Southwark. It is 3.5 miles (5.6 km) south-east of Charing Cross. At the 2001 Census the Peckham ward had a population of 14,720.

Walworth is a district of Central London, England, within the London Borough of Southwark. It adjoins Camberwell to the south and Elephant and Castle to the north, and is 1.9 miles (3.1 km) south-east of Charing Cross. 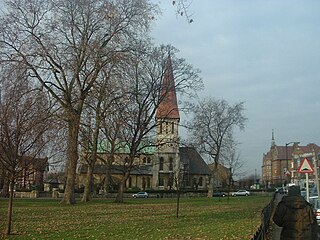 East Dulwich is an area of South East London, England in the London Borough of Southwark. It forms the eastern part of Dulwich, with Peckham to the east and Camberwell to the north. This South London suburb was first developed in the nineteenth century on land owned by the College of God's Gift.

Old Kent Road is a major thoroughfare in South East London, England, passing through the London Borough of Southwark. It was originally part of an ancient trackway that was paved by the Romans and used by the Anglo-Saxons who named it Wæcelinga Stræt. It is now part of the A2, a major road from London to Dover. The road was important in Roman times linking London to the coast at Richborough and Dover via Canterbury. It was a route for pilgrims in the Middle Ages as portrayed in Chaucer's Canterbury Tales, when Old Kent Road was known as Kent Street. The route was used by soldiers returning from the Battle of Agincourt. 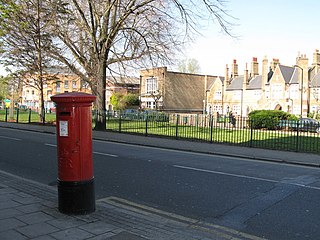 Nunhead is a place in Peckham in the London Borough of Southwark in London, England. It is an inner-city suburb located 4 miles (6.4 km) southeast of Charing Cross. It is the location of the 52-acre (0.21 km2) Nunhead Cemetery. Nunhead has traditionally been a working-class area and, with the adjacent neighbourhoods, is currently going through a lengthy process of gentrification. Nunhead is the location of several underground reservoirs, built by the Southwark and Vauxhall Waterworks Company.

Sydney Smirke was a British architect. 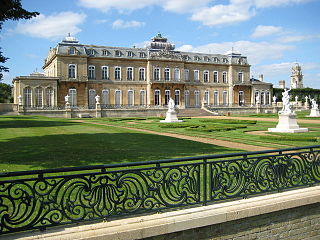 Camberwell and Peckham is a constituency represented in the House of Commons of the UK Parliament since its 1997 creation by Harriet Harman of the Labour Party.

Bermondsey and Old Southwark is a constituency in the House of Commons of the UK Parliament.

The Livesey Museum for Children was in the Old Kent Road, within the London Borough of Southwark, London, England.

Timsbury is a village and civil parish in the Bath and North East Somerset unitary authority of the county of Somerset, 8 miles (13 km) south-west of Bath England. The parish, which includes the hamlets of Meadgate, Radford and Wall Mead, has a population of 2,624. 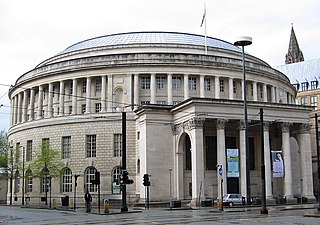 Dulwich Library opened on 24 November 1897. It is an example of a Passmore Edwards library and is located at No. 368 Lordship Lane in East Dulwich, southeast London, England.

Dulwich Public Baths is a swimming pool and gym in Dulwich, South London. It opened in 1892, and is London's oldest public baths to have remained in continuous operation. The baths are listed Grade II on the National Heritage List for England.

Camberwell Public Baths opened in 1892 and has been in continuous operation as publicly funded community baths and more recently as a public leisure centre. 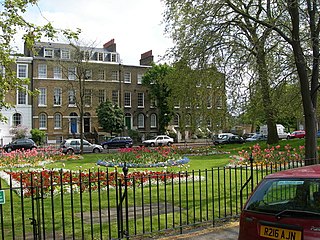 Addington Square is a Georgian and Regency garden square in Camberwell in the London Borough of Southwark which is named after the early 19th century prime minister Henry Addington.

Maurice Bingham Adams FRIBA (1849–1933) was a British architect in the Arts and Crafts style.