Intelligent Whale, an experimental hand-cranked submarine, developed for potential use by the United States Navy in the 1860s.

Intelligent Whale was built on the design of Scovel Sturgis Merriam in 1863 by Augustus Price and Cornelius Scranton Bushnell. In 1864 the American Submarine Company was formed, taking over the interests of Bushnell and Price and there followed years of litigation over the ownership of the craft. Intelligent Whale was completed and launched in 1866. When title was established by a court the submarine was sold on 29 October 1869 through a contract made by owner Oliver Halstead and Secretary of the Navy George M. Robeson to the United States Navy Department, with most of the price to be paid after successful trials. In September 1872 the first trial was held and was unsuccessful, whereupon the Department refused further payments and abandoned the project.

Intelligent Whale submerged by filling water compartments, and expelled the water by pumps and compressed air. It was estimated that it could stay submerged for about ten hours. Thirteen crewmen could be accommodated, but only six were needed to make her operational. The only known trial, reported by submarine pioneer John Philip Holland, was made by a certain General Sweeney and two others. They submerged the boat in 16 feet of water and Sweeney, clad in a diver's suit, emerged through a hole in the bottom, placed a charge under a scow, and reentered the submarine. The charge was exploded by a lanyard and a friction primer attached to the charge, sinking the scow.

Following the failed trial in 1872, Intelligent Whale was put on display at the Brooklyn Navy Yard and remained there until 1968 when she was moved to the Washington Navy Yard where she remained until being relocated to the National Guard Militia Museum of New Jersey in Sea Girt, New Jersey, where she is currently on display.

The U.S. Navy did not accept a submarine for service until the USS Holland was commissioned in 1900.

USS Holland (SS-1) was the United States Navy's first modern commissioned submarine, although not the first military submarine of the United States, which was the 1775 submersible Turtle. The boat was originally laid down as Holland VI at the Crescent Shipyard of Elizabeth, New Jersey for John Holland's Holland Torpedo Boat Company, and launched on 17 May 1897. She was acquired by the USN on 11 April 1900 and commissioned on 12 October 1900, Lieutenant H. H. Caldwell commanding.

USS Whale (SS-239), a Gato-class submarine, was the second ship of the United States Navy to be named for a whale, an extremely large, aquatic mammal that is fishlike in form. The USS Cachalot (SS-170) commissioned on 1 December 1933 preceded the Whale.

Turtle was the world's first submersible vessel with a documented record of use in combat. It was built in 1775 by American David Bushnell as a means of attaching explosive charges to ships in a harbor, for use against Royal Navy vessels occupying North American harbors during the American Revolutionary War. Connecticut Governor Jonathan Trumbull recommended the invention to George Washington, who provided funds and support for the development and testing of the machine.

USS S-5 (SS-110) was a "Government-type" S-class submarine of the United States Navy. Her keel was laid down on 4 December 1917 by the Portsmouth Navy Yard of Kittery, Maine. She was launched on 10 November 1919, sponsored by Mrs. Glenn S. Burrell, and commissioned on 6 March 1920 with Lieutenant Commander Charles M. "Savvy" Cooke, Jr., in command. She sank accidentally during full-power trials on 1 September 1920, but due to actions by her crew and the crews of other ships, no lives were lost. Refloated, she was lost when she sank again while under tow on 3 September 1920. 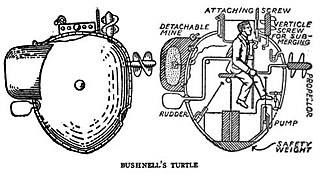 David Bushnell , of Westbrook, Connecticut, was an American inventor, a patriot, one of the first American combat engineers, a teacher, and a medical doctor.

USS Plunger (SS-2) was one of the earliest submarines of the United States Navy. She was the lead boat of her class and was later renamed A-1 when she was designated an A-type submarine. She is not to be confused with the experimental submarine Plunger which was evaluated by the U.S. Navy from 1898 to 1900.

USS Adder, later renamed A-2, was one of seven Plunger-class submarines built for the United States Navy (USN) in the first decade of the 20th century.

USS O-13 (SS-74) was an O-class submarine of the United States Navy. Her keel was laid down on 6 March 1916 by the Lake Torpedo Boat Company in Bridgeport, Connecticut.

USS G-4 (SS-26) was a G-class submarine of the United States Navy. While the four G-boats were nominally all of a class, they differed enough in significant details that they are sometimes considered to be four unique boats, each in a class by herself.

USS Alligator, the fourth United States Navy ship of that name, is the first known U.S. Navy submarine, and was active during the American Civil War. During the Civil War the Confederate States Navy would also build their own submarine, H. L. Hunley. 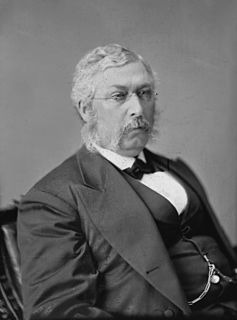 George Maxwell Robeson was an American Republican Party politician, lawyer from New Jersey, a brigadier general in the New Jersey Militia during the American Civil War, Secretary of the Navy appointed by President Ulysses S. Grant, serving from 1869 to 1877, and U.S. Representative for New Jersey, serving from 1879 to 1883. 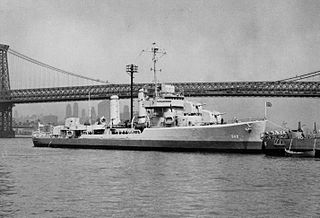 USS Turner (DD-648), was a Gleaves-class destroyer of the United States Navy. She was commissioned on 15 April 1943 and sank after suffering internal explosions on 3 January 1944.

German submarine U-550 was a Type IXC/40 German Navy U-boat built during World War II. She was laid down on 2 October 1942 by Deutsche Werft in Hamburg as yard number 371, launched on 12 May 1943 and commissioned on 28 July under the command of Kapitänleutnant Klaus Hänert.

Cornelius Scranton Bushnell was an American railroad executive and shipbuilder who was instrumental in developing ironclad ships for the Union Navy during the American Civil War.

USS Baker (DE-190) was a Cannon-class destroyer escort built for the United States Navy during World War II. She served in the Atlantic Ocean and provided escort service against submarine and air attack for Navy vessels and convoys. She returned home at war's end with a one battle star for her assistance in sinking a German submarine.

The National Guard Militia Museum of New Jersey is headquartered in Sea Girt, with a second museum located in Lawrenceville, New Jersey, and operates under the auspices of the New Jersey Department of Military and Veterans Affairs.