Newport Music Hall is a music venue located in the University District of Columbus, Ohio, across the street from the Ohio Union of the Ohio State University. It is "America's Longest Continually Running Rock Club". [1]

Newport Music Hall opened in 1921; it was then known as the State Theater. [2] [3] In the 1970s, it became known as the Agora Ballroom. The hall seats 2,000 and most of the original decor is intact. It is one of the many music venues on High Street in Columbus, and the oldest continually running venue. In the past, they have had indoor and outdoor events. Tickets are sold at the Newport box office (open at noon on show days).

Newport was the last American venue at which John Lee Hooker performed before his death in 2001.[ citation needed ]

The Newport was purchased by PromoWest in 1984, reopening as the Newport Music Hall. Located next to the campus of the Ohio State University, Newport Music Hall maintains the preservation of its historical ballroom architecture and the legacy of its past and present performers. With a 2,000 person capacity and hosting over 150,000 guests a year, the Newport Music Hall has become one of the most famous rock clubs in the country.

In 2020, the building that houses Newport was put up for sale by its owners, but this will not directly affect the venue. [4] 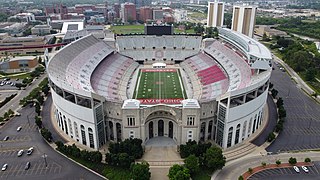 The Chitlin' Circuit was a collection of performance venues throughout the eastern, southern, and upper Midwest areas of the United States that provided commercial and cultural acceptance for African American musicians, comedians, and other entertainers during the era of racial segregation in the United States through the 1960s.

The Agora Theatre and Ballroom is a music venue located in Cleveland, Ohio, founded by Henry "Hank" LoConti Sr. The Agora name was used by two other Cleveland venues in succession, the latter of which was damaged by fire in 1984. The current Agora venue, known as such since 1986, first opened in 1913 as the Metropolitan Theatre. 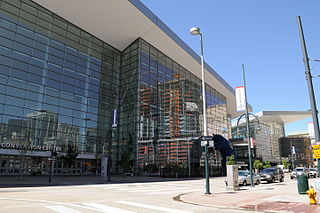 The Germain Amphitheater was a 20,000-seat outdoor entertainment venue located in Columbus, Ohio, near the suburb of Westerville. The venue opened as part of a large development venture off of Interstate Highway I-71. There were 6,700 seats in an open-air pavilion—much of it under cover—and room for another 13,300 people on general admission lawn seating. The concert season began mid-May, continuing through early October and featured 20-30 concerts per year. At the time it opened, it was the largest and most suitable venue for concerts in central Ohio.

The Greater Columbus Convention Center (GCCC) is a convention center located in Downtown Columbus, Ohio, United States, along the east side of North High Street.

KEMBA Live! is a multi-purpose concert venue located in the Arena District of Columbus, Ohio. Opening in 2001, the venues operates year-round with indoor and outdoor facilities: the Indoor Music Hall and Outdoor Amphitheater. The venue was modeled after the House of Blues and described as the "Newport Music Hall on steroids". It features state-of-the-art lighting, acoustical systems and a reversible stage. In 2001, the venue was nominated for a Pollstar Awards for "Best New Major Concert Venue". 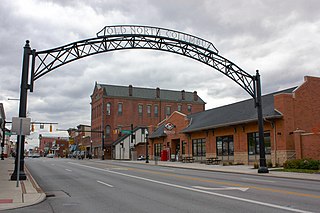 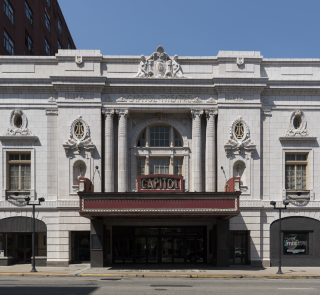 The Capitol Theatre is the largest theatre in West Virginia and a landmark building in the national historic district of downtown Wheeling. For many years, it has served as the home of Jamboree USA and the Wheeling Symphony Orchestra. Jamboree USA, a Saturday night live country music show broadcast on WWVA 1170 AM from 1926 until 2007, was the second-longest running radio show in the United States, second only to the Grand Ole Opry. The live music show annually drew hundreds of thousands of country music fans to Wheeling, where both local acts and nationally known celebrities such as Johnny Cash, Loretta Lynn, Merle Haggard and Charley Pride would perform.

Red Wanting Blue is a rock and roll band led by Scott Terry that formed in Athens, Ohio in 1996. In 1999 the band relocated its headquarters to Columbus, Ohio, the city Red Wanting Blue now calls home. RWB has been touring for nearly two decades playing around 200 live shows a year. Red Wanting Blue is known as an explosive live act to follow, with Terry being compared to some of the most entertaining frontmen in the industry.

New York State is a major center for all types of music. New York has been a famous melting pot of cultures from around the world. Its diverse community has contributed to introducing and spreading many genres of music, including Salsa, Jazz, Folk, Rock and Roll, and Classical. New York's plethora of music venues and event halls serve as popular markers which have housed many noteworthy artists. 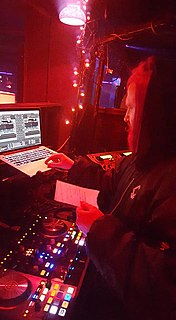 The Phantasy Entertainment Complex has been a staple in the Cleveland music scene since the early 1980s. The Phantasy has helped in launching nationally recognized bands Anne E. DeChant, Devo, Exotic Birds, Filter, Lucky Pierre, the Adults, The Pagans, Stabbing Westward, and was the debut location for Nine Inch Nails. It has also been a stopover for other major acts like Iggy Pop, Jesus and Mary Chain, The Pogues, The Psychedelic Furs, the Ramones and Psychic TV and has hosted reunion shows for bands including Lestat, among others.