Last updated February 18, 2020
This article is about the human condition. For peritonitis in cats, see Feline infectious peritonitis.

Peritonitis is inflammation of the peritoneum, the lining of the inner wall of the abdomen and cover of the abdominal organs. [2] Symptoms may include severe pain, swelling of the abdomen, fever, or weight loss. [2] [3] One part or the entire abdomen may be tender. [1] Complications may include shock and acute respiratory distress syndrome. [4] [5]

Causes include perforation of the intestinal tract, pancreatitis, pelvic inflammatory disease, stomach ulcer, cirrhosis, or a ruptured appendix. [3] Risk factors include ascites and peritoneal dialysis. [4] Diagnosis is generally based on examination, blood tests, and medical imaging. [6]

Treatment often includes antibiotics, intravenous fluids, pain medication, and surgery. [3] [4] Other measures may include a nasogastric tube or blood transfusion. [4] Without treatment death may occur within a few days. [4] Approximately 7.5% of people have appendicitis at some point in time. [1] About 20% of people with cirrhosis who are hospitalized have peritonitis. [1]

The main manifestations of peritonitis are acute abdominal pain, abdominal tenderness, abdominal guarding, rigidity, which are exacerbated by moving the peritoneum, e.g., coughing (forced cough may be used as a test), flexing one's hips, or eliciting the Blumberg sign (a.k.a. rebound tenderness, meaning that pressing a hand on the abdomen elicits less pain than releasing the hand abruptly, which will aggravate the pain, as the peritoneum snaps back into place). Rigidity is highly specific for diagnosing peritonitis (specificity: 76–100%, positive likelihood ratio: 3.6). [7] The presence of these signs in a person is sometimes referred to as peritonism. [8] The localization of these manifestations depends on whether peritonitis is localized (e.g., appendicitis or diverticulitis before perforation), or generalized to the whole abdomen. In either case, pain typically starts as a generalized abdominal pain (with involvement of poorly localizing visceral innervation of the visceral peritoneal layer), and may become localized later (with involvement of the somatic innervation of the parietal peritoneal layer).[ citation needed ] Peritonitis is an example of an acute abdomen.

A diagnosis of peritonitis is based primarily on the clinical manifestations described above. Rigidity (involuntary contraction of the abdominal muscles) is the most specific exam finding for diagnosing peritonitis (+ likelihood ratio: 3.9). If focal peritonitis is detected, further work-up should be done. If diffuse peritonitis is detected, then urgent surgical consultation should be obtained, and may warrant surgery without further investigations. Leukocytosis, hypokalemia, hypernatremia, and acidosis may be present, but they are not specific findings. Abdominal X-rays may reveal dilated, edematous intestines, although such X-rays are mainly useful to look for pneumoperitoneum, an indicator of gastrointestinal perforation. The role of whole-abdomen ultrasound examination is under study and is likely to expand in the future. Computed tomography (CT or CAT scanning) may be useful in differentiating causes of abdominal pain. If reasonable doubt still persists, an exploratory peritoneal lavage or laparoscopy may be performed. In people with ascites, a diagnosis of peritonitis is made via paracentesis (abdominal tap): More than 250 polymorphonuclear cells per μL is considered diagnostic. In addition, Gram stain is almost always negative, whereas culture of the peritoneal fluid can determine the microorganism responsible and determine their sensitivity to antimicrobial agents.

In normal conditions, the peritoneum appears greyish and glistening; it becomes dull 2–4 hours after the onset of peritonitis, initially with scarce serous or slightly turbid fluid. Later on, the exudate becomes creamy and evidently suppurative; in people who are dehydrated, it also becomes very inspissated. The quantity of accumulated exudate varies widely. It may be spread to the whole peritoneum, or be walled off by the omentum and viscera. Inflammation features infiltration by neutrophils with fibrino-purulent exudation.

Depending on the severity of the person's state, the management of peritonitis may include:

If properly treated, typical cases of surgically correctable peritonitis (e.g., perforated peptic ulcer, appendicitis, and diverticulitis) have a mortality rate of about <10% in otherwise healthy people. The mortality rate rises to about 40% in the elderly, or in those with significant underlying illness, as well as cases that present late (after 48 hours). 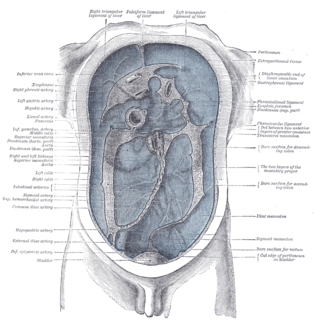 The peritoneum is the serous membrane forming the lining of the abdominal cavity or coelom in amniotes and some invertebrates, such as annelids. It covers most of the intra-abdominal organs, and is composed of a layer of mesothelium supported by a thin layer of connective tissue. This peritoneal lining of the cavity supports many of the abdominal organs and serves as a conduit for their blood vessels, lymphatic vessels, and nerves. 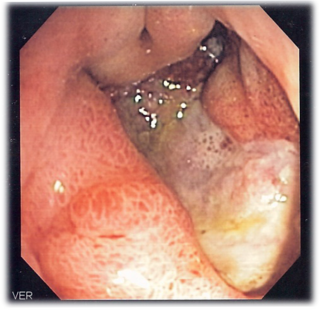 Peptic ulcer disease (PUD) is a break in the inner lining of the stomach, the first part of the small intestine, or sometimes the lower esophagus. An ulcer in the stomach is called a gastric ulcer, while one in the first part of the intestines is a duodenal ulcer. The most common symptoms of a duodenal ulcer are waking at night with upper abdominal pain and upper abdominal pain that improves with eating. With a gastric ulcer, the pain may worsen with eating. The pain is often described as a burning or dull ache. Other symptoms include belching, vomiting, weight loss, or poor appetite. About a third of older people have no symptoms. Complications may include bleeding, perforation, and blockage of the stomach. Bleeding occurs in as many as 15% of cases.

The abdominal cavity is a large body cavity in humans and many other animals that contains many organs. It is a part of the abdominopelvic cavity. It is located below the thoracic cavity, and above the pelvic cavity. Its dome-shaped roof is the thoracic diaphragm, a thin sheet of muscle under the lungs, and its floor is the pelvic inlet, opening into the pelvis.

Appendicitis is inflammation of the appendix. Symptoms commonly include right lower abdominal pain, nausea, vomiting, and decreased appetite. However, approximately 40% of people do not have these typical symptoms. Severe complications of a ruptured appendix include widespread, painful inflammation of the inner lining of the abdominal wall and sepsis.

Peritoneal dialysis (PD) is a type of dialysis which uses the peritoneum in a person's abdomen as the membrane through which fluid and dissolved substances are exchanged with the blood. It is used to remove excess fluid, correct electrolyte problems, and remove toxins in those with kidney failure. Peritoneal dialysis has better outcomes than hemodialysis during the first couple of years. Other benefits include greater flexibility and better tolerability in those with significant heart disease.

Spontaneous bacterial peritonitis (SBP) is the development of a bacterial infection in the peritoneum, despite the absence of an obvious source for the infection. It is specifically an infection of the ascitic fluid – an increased volume of peritoneal fluid. Ascites is most commonly a complication of cirrhosis of the liver. It can also occur in patients with nephrotic syndrome. SBP has a high mortality rate. 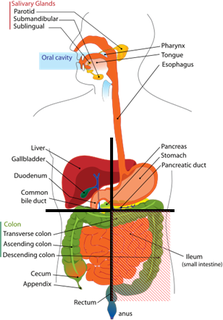 Gastrointestinal perforation, also known as ruptured bowel, is a hole in the wall of part of the gastrointestinal tract. The gastrointestinal tract includes the esophagus, stomach, small intestine, and large intestine. Symptoms include severe abdominal pain and tenderness. When the hole is in the stomach or early part of the small intestine the onset of pain is typically sudden while with a hole in the large intestine onset may be more gradual. The pain is usually constant in nature. Sepsis, with an increased heart rate, increased breathing rate, fever, and confusion may occur.

Pneumoperitoneum is pneumatosis in the peritoneal cavity, a potential space within the abdominal cavity. The most common cause is a perforated abdominal organ, generally from a perforated peptic ulcer, although any part of the bowel may perforate from a benign ulcer, tumor or abdominal trauma. A perforated appendix seldom causes a pneumoperitoneum.

Abdominal distension occurs when substances, such as air (gas) or fluid, accumulate in the abdomen causing its expansion. It is typically a symptom of an underlying disease or dysfunction in the body, rather than an illness in its own right. People suffering from this condition often describe it as "feeling bloated". Sufferers often experience a sensation of fullness, abdominal pressure and possibly nausea, pain or cramping. In the most extreme cases, upward pressure on the diaphragm and lungs can also cause shortness of breath. Through a variety of causes, bloating is most commonly due to buildup of gas in the stomach, small intestine or colon. The pressure sensation is often relieved, or at least lessened, by belching or flatulence. Medications that settle gas in the stomach and intestines are also commonly used to treat the discomfort and lessen the abdominal distension.

In medicine, Valentino's syndrome is pain presenting in the right lower quadrant of the abdomen caused by a duodenal ulcer with perforation through the retroperitoneum.

An acute abdomen refers to a sudden, severe abdominal pain. It is in many cases a medical emergency, requiring urgent and specific diagnosis. Several causes need immediate surgical treatment.

Abdominal trauma is an injury to the abdomen. Signs and symptoms include abdominal pain, tenderness, rigidity, and bruising of the external abdomen. Complications may include blood loss and infection.

Hinchey Classification is used to describe perforations of the colon due to diverticulitis. The classification was developed by Dr. E John Hinchey (1934-present), a general surgeon at the Montreal General Hospital and professor of surgery at McGill University.