Portrush (from Irish : Port Rois, meaning 'port of the promontory ') [3] is a small seaside resort town on the north coast of County Antrim, Northern Ireland. It neighbours the resort of Portstewart. The main part of the old town, including the railway station as well as most hotels, restaurants and bars, is built on a mile–long peninsula, Ramore Head. It had a population of 6,454 people at the 2011 Census. [4] In the off-season, Portrush is a dormitory town for the nearby campus of the University of Ulster at Coleraine.

The town is well known for its three sandy beaches, the West Strand, East Strand and White Rocks, as well as the Royal Portrush Golf Club, the only golf club outside Great Britain which has hosted The Open Championship in 1951 and 2019.

RNLI lifeboats have operated out of Portrush Harbour since 1860, and currently stationed there are the Severn class William Gordon Burr and the D-class inshore vessel David Roulston.

A number of flint tools found during the late 19th century show that the site of Portrush was occupied during the "Larnian" (late Irish Mesolithic) period; [6] recent estimates date this to around 4000 BC. [7]

The site of Portrush, with its excellent natural defences, probably became a permanent settlement around the 12th or 13th century. A church is known to have existed on Ramore Head at this time, but no part of it now survives. From the records of the papal taxation of 1306, the Portrush church – and by extension the village – appears to have been reasonably wealthy. The promontory also held two castles, at varying periods. The first of these, Caisleán an Teenie, is believed to have been at the tip of Ramore Head, and probably destroyed in the late 16th century; the other, Portrush Castle, may have been built around the time of the Plantation of Ulster in the early 17th century. Nothing survives of either castle. [8]

Following the Wars of the Three Kingdoms in the mid-17th century, Portrush became a small fishing town. It grew heavily in the 19th century as a tourist destination, following the opening of the Ballymena, Ballymoney, Coleraine and Portrush Junction Railway in 1855, and by the turn of the 20th century had become one of the major resort towns of Ireland, with a number of large hotels and boarding houses including the prominent Northern Counties Hotel. As well as the town's beaches and the Royal Portrush Golf Club (opened 1888), the nearby Giant's Causeway was a popular tourist destination, with the Giant's Causeway Tramway – at the time, one of the world's longest electrified railways – built in 1893 to cater to travellers coming from Portrush.

The town's fortunes peaked in the late 19th and early 20th century, and declined after the Second World War with the growth of foreign travel. It escaped any involvement in the Troubles until 3 August 1976, when a series of bombings of properties burned out and destroyed several buildings, though with no loss of life. [9] In a second attack in April 1987, two officers of the Royal Ulster Constabulary (RUC) were shot in the back by the Provisional Irish Republican Army while on foot patrol on Main Street. [10]

A panorama of Portrush

The following schools are in Portrush: [18]

Portrush railway station was opened on 4 December 1855 and closed for goods traffic on 20 September 1954. The station is the last stop on the Coleraine-Portrush railway line, where travellers can connect with trains to Derry, Belfast and beyond. [20]

Portrush is a busy seaside resort, with a frequent train service run by Northern Ireland Railways connecting with Ulsterbus services linking to Bushmills and the Giant's Causeway. 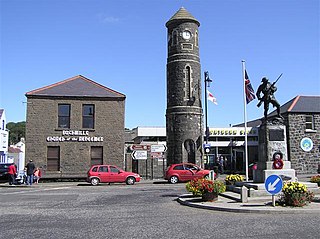 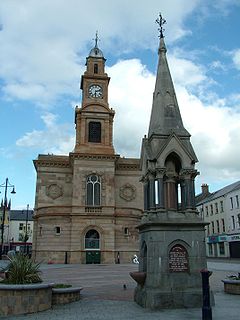 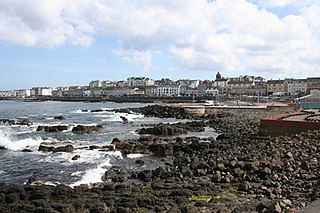 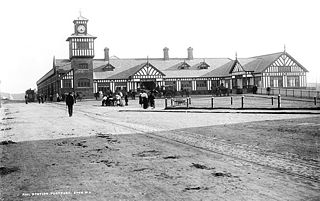 Castlerock is a seaside village in County Londonderry, Northern Ireland. It is situated five miles west of Coleraine, and is part of Causeway Coast and Glens district. It is very popular with summer tourists, having numerous apartment blocks and two caravan sites. Castlerock Golf Club has both 9-hole and 18-hole links courses bounded by the beach, the River Bann and the Belfast to Derry railway line. The village had a recorded population of 1,287 people in the 2011 census, and is where near by village Articlave F.C play their home games. 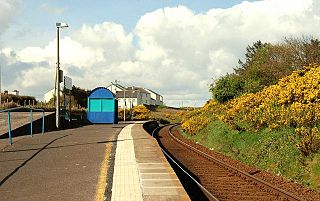 The Coleraine–Portrush line is a short branch railway line in Northern Ireland between the town of Coleraine in County Londonderry and the seaside resort of Portrush in County Antrim. The line, which is operated by Northern Ireland Railways, has two intermediate halts and connects to the main Belfast–Derry line at Coleraine. 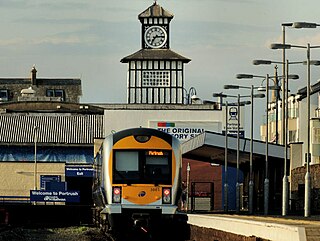 The 3 ft narrow gauge Portstewart Tramway operated tramway services between Portstewart and Portstewart railway station at Cromore from 1882 to 1926.