Quindalup is a small town in the South West region of Western Australia. It is situated along Caves Road between Busselton and Dunsborough on Geographe Bay. At the 2016 census, Quindalup had a population of 1,336. [1]

The area was the site of one of the earliest timber industries in the state. Several timber mills were constructed in the area and the products were exported utilising a jetty that had been constructed on the coast in the 1860s. The first recorded use of the name was on a timber mill owned by Henry Yelverton and McGibbon. Land was reserved by the government in the 1870s and in 1899 local fishermen petitioned for a town to be declared along the beach front. Lots were surveyed the same year and the town was gazetted in 1899. [2]

The name is Aboriginal in origin and means place of the Quenda .

The town was situated close to a shallow inlet, where the jetty was built, which was used to load timber sent up by a tramway, to boats that would ferry the timber to boats anchored a few kilometres offshore. [3]

The only parts of the original settlement that are left are slab cottage group, known as Harwoods Cottage, which was constructed c. 1860 and associated with the original timber mill. The cottage group is composed of a cottage, gaol, post office, telephone exchange and Customs House. [4] The buildings were almost derelict until restorations planned in 1998, commenced in 2000 and the operation was opened for business in 2000 with accommodation opened in 2004.

Apollo Bay is a coastal town in southwestern Victoria, Australia. It is situated on the eastern side of Cape Otway, along the edge of the Barham River and on the Great Ocean Road, in the Colac Otway Shire. The town had a population of 1,598 at the 2016 census. 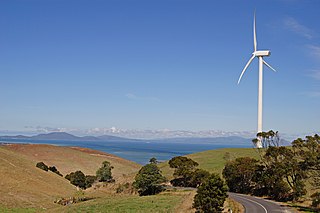 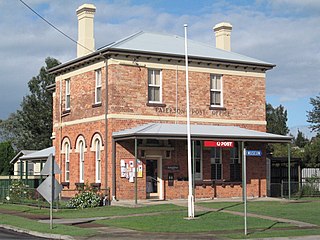 Paterson is a small township in the lower Hunter Region of New South Wales, Australia. Located within Dungog Shire it is situated on the Paterson River. It is in the middle of what was once dairy, timber and citrus country and is now more significantly a feeder town for the nearby mining industry in the Upper Hunter and the city of Newcastle It was named after one of the first known Europeans in the area was Colonel William Paterson in 1801 surveyed the area beside the river. 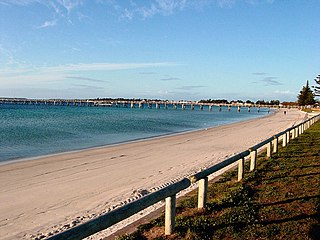 Tumby Bay is a coastal town situated on the Spencer Gulf, on the eastern coast of Eyre Peninsula in South Australia, 45 kilometres (28 mi) north of Port Lincoln. The town of Tumby Bay is the major population centre of the District Council of Tumby Bay, and the centre of an agricultural district farming cereal crops and sheep, as well as having established fishing and tourism industries. 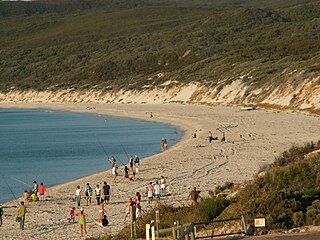 South Perth is a residential suburb of Perth, Western Australia that adjoins the southern shore of Perth Water on the Swan River; it is 3 kilometres (2 mi) south of the central business district. The suburb adjoins two major arterial roads—Canning Highway and the Kwinana Freeway, and is within the City of South Perth local government area.

Port Neill is a small coastal town on the eastern side of the Eyre Peninsula, in South Australia about 3 km off the Lincoln Highway between the major towns of Whyalla and Port Lincoln. It is 576 km by road from Adelaide. 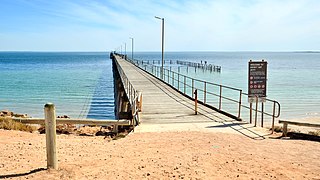 Smoky Bay is a town and locality located in the Australian state of South Australia on the west coast of the Eyre Peninsula. Previously used as a port, the town is now a residential settlement and popular tourist destination known for its recreational fishing, with a boat ramp and jetty located in the town.

Grantville is a small town in Victoria, Australia. In the 2016 census, Grantville had a population of 831. 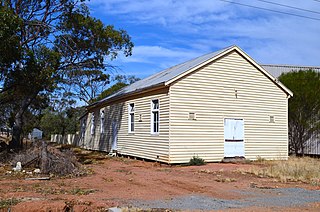 Coomberdale is a small town located along the Midlands Road between Moora and Watheroo in the Wheatbelt region of Western Australia. It had 64 residents in the 2016 census.

Green Head is a small Australian coastal town in the Shire of Coorow. The town is situated between Geraldton and Perth in the Mid West region of Western Australia along Indian Ocean Drive. Its beaches and lifestyle provide a relaxed holiday atmosphere. It is the home of what was a significant, but now declining, rock lobster industry. 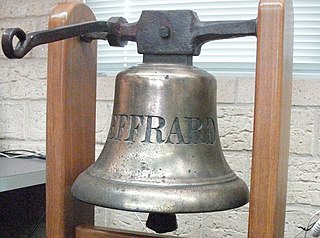 Geffrard was a 321-ton British brig that traded between Australia, Mauritius, and Shanghai, and was wrecked off the coast of Western Australia on 13 June 1875. She was built in 1853 by Fred Clark in Jersey in the Channel Islands. By 1873 she had made her way to Melbourne and was owned by Fred Davis and under the control of Captain William James Munday. Her movements after that were generally around the southern coasts of Australia, from Geraldton in the west to Sydney in the east, laden with a variety of general cargo.