Before World War II, Romania was primarily agrarian; in the late 1940s, about three-quarters of the population was engaged in subsistence agriculture from ever-shrinking plots of land (due to an increasing rural population). Although some industrial activity was encouraged by state contracts and foreign investment, industrial development was slow and failed to create alternative employment opportunities for the overpopulated and impoverished countryside. Atop the low social pyramid stood a disproportionately powerful social elite, a remnant of the nobility that had once owned most of the land in the old kingdom. Although reforms between 1917 and 1921 had left them with only 15% of the arable land, this aristocracy retained a powerful voice in political affairs.

After World War II, Romania's social structure was drastically altered by the imposition of a political system envisioning a classless, egalitarian society. Marxist-Leninist doctrine holds that the establishment of a socialist state (in which the working class possesses the means of production and distribution of goods and political power) will ensure the eventual development of communism. Under communism, there would be no class conflict or exploitation of man by his fellow man. There would be an abundance of wealth, shared equally by all. The road to communism requires the primacy of the working class and the elimination of the ruling class and bourgeoisie. In Romania the latter was easily accomplished, but most of the population were peasants and not workers.

The Communist government (imposed by the Soviet Union in 1945) eliminated opposition to their consolidation of power by appeals to the working class. Disruption caused by World War II assisted the new government; much of the ruling elite had either emigrated or been killed, and many survivors left with the retreating German forces as the Red Army approached. Most Jews (who had constituted a large segment of the communal and financial elite before the war) either died in fascist Romania or fled the country over the next few years.

Measures taken during the early days of communist rule eradicated what remained of the upper crust. Land reforms in 1945 eliminated large holdings, depriving the aristocracy of their power and economic base. The currency reform of 1947 (which essentially confiscated all money for the state) was ruinous for members of the commercial and industrial bourgeoisie who had not fled with their fortunes. The state also expropriated commercial and industrial properties; by 1950 90% of all industrial output was state-controlled, and by 1953 only 14% of shops were privately owned.

Although opposition from the more economically and socially advanced members of society was eliminated almost immediately, the task of creating an industrial working class (in whose name the communists claimed power) had just begun. In 1950, less than 25% of the population lived in cities or worked in factories. Conditions in the countryside, however, were poised for change in the direction the regime required. The war and Soviet occupation had left the peasantry starving, with much of their livestock and capital destroyed. Their problems were compounded by a drought in 1945–1946, followed by a famine in which thousands died. More important for the regime, many of the peasants became detached from the land and were willing to work in factory jobs resulting from the Communist Party's industrialization program. [1]

From the late 1970s to the 1980s there was a growing economic crisis, leading to a sharp decline in living standards. The response by Nicolae Ceaușescu, which made liberal use of austerity, led to heightened societal tensions and even worse conditions for working people. In December 1989, the government headed by Nicolae Ceaușescu was forcibly overthrown, with rioting in Bucharest. The sudden removal of a state-controlled economy led to further erosion in the standard of living, with unemployment and job insecurity. [2] Social change in Romania has been slow, with progress toward a less-centrally-controlled economy sporadic in nature. [3]

Agrarianism as a political and social philosophy relates to the ownership and use of land for farming, or to the part of a society or economy that is tied to agriculture. Agrarianism and agrarians will typically advocate on behalf of farmers and those in rural communities. While many schools of thought exist within agrarianism, historically a recurring feature of agrarians has been a commitment to egalitarianism, with agrarian political parties normally supporting the rights of small farmers and poor peasants against the wealthy in society. 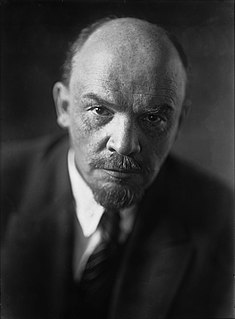 Leninism is a political ideology developed by Russian Marxist revolutionary Vladimir Lenin that proposes the establishment of the dictatorship of the proletariat, led by a revolutionary vanguard party, as the political prelude to the establishment of communism. The function of the Leninist vanguard party is to provide the working classes with the political consciousness and revolutionary leadership necessary to depose capitalism in the Russian Empire (1721–1917). Leninist revolutionary leadership is based upon The Communist Manifesto (1848) identifying the communist party as "the most advanced and resolute section of the working class parties of every country; that section which pushes forward all others." As the vanguard party, the Bolsheviks viewed history through the theoretical framework of dialectical materialism, which sanctioned political commitment to the successful overthrow of capitalism, and then to instituting socialism; and, as the revolutionary national government, to realize the socio-economic transition by all means.

Marxism–Leninism is a communist ideology and the main communist movement throughout the 20th century. It was the ideology of the Soviet Union and other ruling parties of the Eastern Bloc as well as the Communist International after Bolshevisation. Traditional Marxism–Leninism holds that a two-stage communist revolution is needed to replace capitalism. A vanguard party—organised hierarchically through democratic centralism—would seize power "on behalf of the proletariat" and establish a one-party socialist state, a dictatorship of the proletariat. The state would control the economy and means of production, promote collectivism in society, suppress opposition and the bourgeoisie, and pave the way for an eventual communist society which would be both classless and stateless. Marxist–Leninist states have been commonly referred to by Western academics as communist states. Marxist–Leninists generally support internationalism and oppose fascism, imperialism and liberal democracy.

Nicolae Ceaușescu was a Romanian communist politician and leader. He was the general secretary of the Romanian Communist Party from 1965 to 1989, and the second and last Communist leader of Romania. He was also the country's head of state from 1967, serving as President of the State Council and from 1974 concurrently as President of the Republic, until his overthrow and execution in the Romanian Revolution in December 1989, part of a series of anti-Communist and anti-Soviet uprisings in Eastern Europe that year.

The Socialist Republic of Romania was a Marxist-Leninist one-party communist state that existed officially in Romania from 1947 to 1989. From 1947 to 1965, the state was known as the Romanian People's Republic. The country was an Eastern Bloc state and a member of the Warsaw Pact with a dominant role for the Romanian Communist Party enshrined in its constitutions. Geographically, Romania bordered the Black Sea to the east; the Soviet Union to the north and east; Hungary and Yugoslavia to the west and Bulgaria to the south. 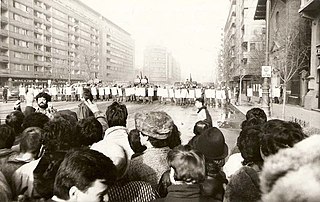 The Romanian Revolution was a period of civil unrest in Romania during December 1989 as a part of the Revolutions of 1989 that occurred in several countries. The Romanian Revolution started in the city of Timișoara and soon spread throughout the country, ultimately culminating in the show trial and execution of longtime Communist Party General Secretary Nicolae Ceaușescu and his wife Elena, and the end of 42 years of Communist rule in Romania. It was also the last removal of a Marxist-Leninist government in a Warsaw Pact country during the events of 1989, and the only one that violently overthrew a country's government and executed its leader. 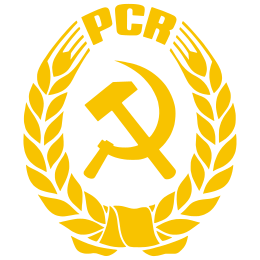 The Romanian Communist Party was a communist party in Romania. Successor to the pro-Bolshevik wing of the Socialist Party of Romania, it gave ideological endorsement to a communist revolution to overthrow the Kingdom of Romania. The PCR was a minor and illegal grouping for much of the interwar period, and submitted to direct Comintern control. During the 1930s, most of its activists were imprisoned or took refuge in the Soviet Union, which led to the creation of separate and competing factions until the 1950s. The Communist Party emerged as a powerful actor on the Romanian political scene in August 1944, when it became involved in the royal coup that toppled the pro-Nazi government of Ion Antonescu. With support from Soviet occupational forces, the PCR was able to force King Michael I into exile, and establish undisguised Communist rule in 1948.

The National Salvation Front is the name of a political organization that was the governing body of Romania in the first weeks after the Romanian Revolution in 1989. It subsequently became a political party, and won the 1990 election under the leadership of then-President Ion Iliescu. 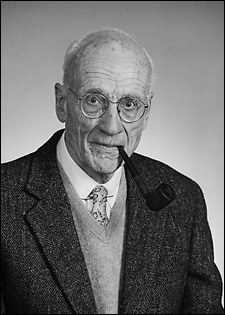 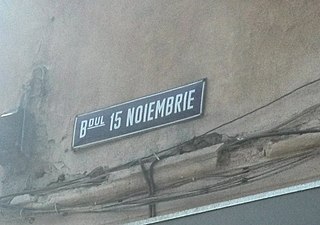 The Rebellion of Brașov was a revolt against Nicolae Ceaușescu's economic policies in Communist Romania, which erupted on the day of the 1987 local election. 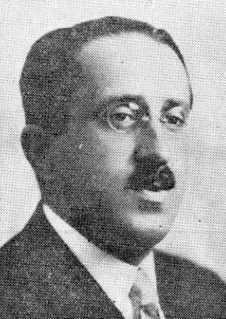 Virgil Traian N. Madgearu was a Romanian economist, sociologist, and left-wing politician, prominent member and main theorist of the Peasants' Party and of its successor, the National Peasants' Party (PNȚ). He had an important activity as an essayist and journalist, being for long a member on the editorial board for the influential Viaţa Românească.

Lothar or Lotar Rădăceanu was a Romanian journalist and linguist, best known as a socialist and communist politician.

After the collapse of a short-lived Communist regime, according to historian István Deák: 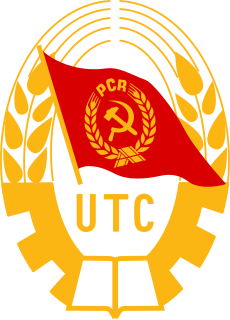 Four major land reforms have taken place in Romania: in 1864, 1921, 1945 and 1991. The first sought to undo the feudal structure that had persisted after the unification of the Danubian Principalities in 1859; the second, more drastic reform, tried to resolve lingering peasant discontent and create social harmony after the upheaval of World War I and extensive territorial expansion; the third, imposed by a mainly Communist government, did away with the remaining influence of the landed aristocracy but was itself soon undone by collectivisation, which the fourth then unravelled, leading to almost universal private ownership of land today.

The Romania Anti-Religious Campaign, refers to the anti-religious campaign initiated by the Socialist Republic of Romania, which under the doctrine of Marxist–Leninist atheism, took a hostile stance against religion, and set its sights on the ultimate goal of an atheistic society, wherein religion would be recognized as the ideology of the bourgeoisie.

The 1980s austerity policy in Romania was imposed by Romanian dictator Nicolae Ceaușescu in order to pay out the external debt incurred by the state in the 1970s. Beginning in 1981, the austerity led to economic stagnation that continued all throughout the 1980s, a "sui generis shock therapy" which lowered the competitiveness of the Romanian economy and decreased the amount of exports.

Agrarian socialism is a political ideology which combines an agrarian way of life with a socialist economic system. 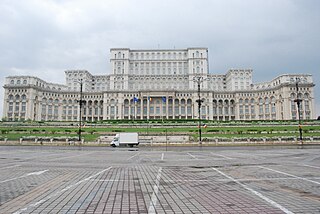 The economy of the Socialist Republic of Romania was centrally planned similar to the one of the Soviet Union. Most of the means of production were owned by the state, which established production plans as part of the Five-Year Plans.