Last updated August 08, 2022
Family of spiders
Not to be confused with spider crab.

The Thomisidae are a family of spiders, including about 170 genera and over 2,100 species. The common name crab spider is often linked to species in this family, but is also applied loosely to many other families of spiders. Many members of this family are also known as flower spiders or flower crab spiders. [3]

Thomisidae do not build webs to trap prey, though all of them produce silk for drop lines and sundry reproductive purposes; some are wandering hunters and the most widely known are ambush predators. Some species sit on or beside flowers or fruit, where they grab visiting insects. Individuals of some species, such as Misumena vatia and Thomisus spectabilis , are able to change color over a period of some days, to match the flower on which they are sitting. Some species frequent promising positions among leaves or bark, where they await prey, and some of them sit in the open, where they are startlingly good mimics of bird droppings. However, these members of the family Thomisidae are not to be confused with the spiders that generally are called bird-dropping spiders, not all of which are close relatives of crab spiders.

Other species of crab spiders with flattened bodies either hunt in the crevices of tree trunks or under loose bark, or shelter under such crevices by day, and come out at night to hunt. Members of the genus Xysticus hunt in the leaf litter on the ground. In each case, crab spiders use their powerful front legs to grab and hold on to prey while paralysing it with a venomous bite.

The spider family Aphantochilidae was incorporated into the Thomisidae in the late 1980s. Aphantochilus species mimic Cephalotes ants, on which they prey.

The spiders of Thomisidae are not known to be harmful to humans. However, spiders of a distantly related genus, Sicarius , which are sometimes referred to as "crab spiders", or "six-eyed crab spiders", are close cousins to the recluse spiders, and are highly venomous, though human bites are rare.

Several different types of sexual dimorphism have been recorded in crab spiders. Some species exhibit color dimorphisms; [6] however, the most apparent dimorphism is the difference in size between males and females. In some species, this is relatively small; females of Misumena vatia are roughly twice the size of their male counterparts. [7] In other cases, the difference is extreme; on average, female Thomisus onustus are more than 60 times as massive as the males. [8]

Several hypothesized explanations are given for the evolution of sexual size dimorphisms in the Thomisidae and other sister taxa. [9] The most widely acknowledged hypothesis for female growth is the fecundity hypothesis: [10] selection favors larger females so they can produce more eggs and healthier offspring. Because males do not carry and lay eggs, a growth in size does not confer a fitness advantage. [11]

However, sexual size dimorphism may be a result of male dwarfism. The gravity hypothesis states that the smaller size allows the male to travel with greater ease, providing him with an increased opportunity to find mates. [12] Females are comparatively stationary, and their larger size allows them to capture larger prey, such as butterflies and bees, granting females the additional nutrients necessary for egg production. [8]

Other hypotheses propose that sexual size dimorphism evolved by chance, and no selective advantage exists to larger females or smaller males. [13] 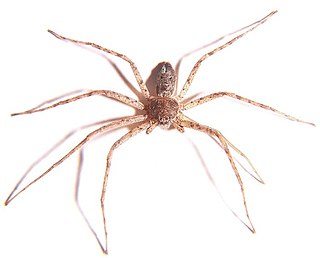 Philodromidae, also known as philodromid crab spiders and running crab spiders, is a family of araneomorph spiders first described by Tord Tamerlan Teodor Thorell in 1870. It contains over 500 species in thirty genera.

Orb-weaver spiders are members of the spider family Araneidae. They are the most common group of builders of spiral wheel-shaped webs often found in gardens, fields, and forests. The English word orb can mean "circular", hence the English name of the group. Araneids have eight similar eyes, hairy or spiny legs, and no stridulating organs. 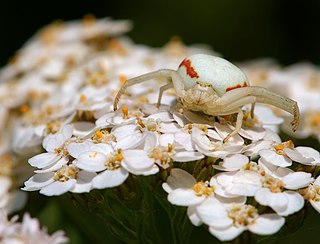 Misumenops is a common genus of crab spider with more than 50 described species. 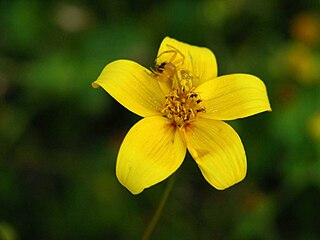 Misumenoides is a genus of spiders in the family Thomisidae. Spiders in this family are commonly called "crab" or "flower" spiders. 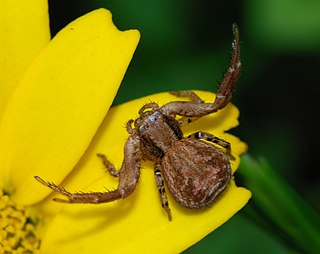 Diaea is a genus of crab spiders first described by Tamerlan Thorell in 1869. Most species are found in specific locations except for D. livens, which occurs in the United States and D. dorsata, which has a palearctic distribution. Adults are 5 millimetres (0.20 in) to 7 millimetres (0.28 in) and tend to hide in and around vegetation, especially flowers, where their color allows them to blend in to their surroundings.

Micrathena, known as spiny orbweavers, is a genus of orb-weaver spiders first described by Carl Jakob Sundevall in 1833. Micrathena contains more than a hundred species, most of them Neotropical woodland-dwelling species. The name is derived from the Greek "micro", meaning "small", and the goddess Athena. 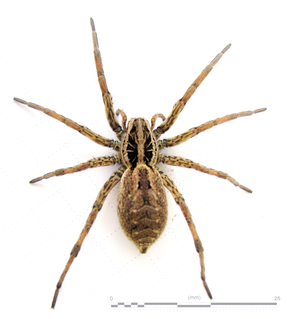 Runcinia is a genus of crab spiders that was first described by Eugène Louis Simon in 1875. The former R. elongata is a synonym of Thomisus elongatus.

Tmarus is a genus of crab spiders, comprising the following species: 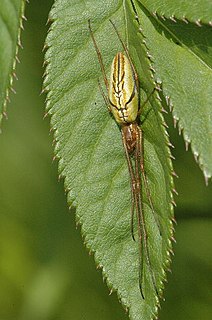 Thomisus is a genus of crab spiders with around 150 species described. The genus includes species that vary widely in their ecology, with some that ambush predators that feed on insects visiting flowers. Like several other genera in the family Thomisidae, they are sometimes referred to as flower crab spiders, from their crab-like motion and their way of holding their front legs, reminiscent of a crab spreading its claws as a threat.

Euryopis is a genus of comb-footed spiders that was first described by Anton Menge in 1868. 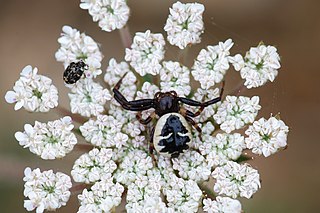