TRH has been used clinically for the treatment of spinocerebellar degeneration and disturbance of consciousness in humans. [1] Its pharmaceutical form is called protirelin (INN) ( /proʊˈtaɪrɪlɪn/ ).

TRH is synthesized within parvocellular neurons of the paraventricular nucleus of the hypothalamus. [2] It is translated as a 242-amino acid precursor polypeptide that contains 6 copies of the sequence -Gln-His-Pro-Gly-, flanked by Lys-Arg or Arg-Arg sequences.

To produce the mature form, a series of enzymes are required. First, a protease cleaves to the C-terminal side of the flanking Lys-Arg or Arg-Arg. Second, a carboxypeptidase removes the Lys/Arg residues leaving Gly as the C-terminal residue. Then, this Gly is converted into an amide residue by a series of enzymes collectively known as peptidylglycine-alpha-amidating monooxygenase. Concurrently with these processing steps, the N-terminal Gln (glutamine) is converted into pyroglutamate (a cyclic residue). These multiple steps produce 6 copies of the mature TRH molecule per precursor molecule for human TRH (5 for mouse TRH).

TRH synthesizing neurons of the paraventricular nucleus project to the medial portion of the external layer of the median eminence. Following secretion at the median eminence, TRH travels to the anterior pituitary via the hypophyseal portal system where it binds to the TRH receptor stimulating the release of thyroid-stimulating hormone from thyrotropes and prolactin from lactotropes. [3] The half-life of TRH in the blood is approximately 6 minutes.

TRH is a tripeptide, with an amino acid sequence of pyroglutamyl-histidyl-proline amide.

The structure of TRH was first determined, and the hormone synthesized, by Roger Guillemin and Andrew V. Schally in 1969. [4] [5] Both parties insisted their labs determined the sequence first: Schally first suggested the possibility in 1966, but abandoned it after Guillemin proposed TRH was not actually a peptide. Guillemin's chemist began concurring with these results in 1969, as NIH threatened to cut off funding for the project, leading both parties to return to work on synthesis. [6]

Schally and Guillemin shared the 1977 Nobel Prize in Medicine "for their discoveries concerning the peptide hormone production of the brain." [7] News accounts of their work often focused on their "fierce competition" and use of a very large amount of sheep and pig brains to locate the hormone. [6]

TRH is used clinically by intravenous injection (brand name Relefact TRH) to test the response of the anterior pituitary gland; this procedure is known as a TRH test. This is done as diagnostic test of thyroid disorders such as secondary hypothyroidism and in acromegaly.

TRH has anti-depressant and anti-suicidal properties, [8] and in 2012 the U.S. Army awarded a research grant to develop a TRH nasal spray in order to prevent suicide amongst its ranks. [9] [10] The antidepressant properties of TRH are present when TRH is administered intrathecally, or administration into the spine, and the effects are short-lived. [8] Some researchers are testing a prodrug approach to administer TRH orally and have TRH reach the brain without being degraded in the stomach or blood. [11]

TRH has been shown in mice to be an anti-aging agent with a broad spectrum of activities that, because of their actions, suggest that TRH has a fundamental role in the regulation of metabolic and hormonal functions. [12]

In vertebrate anatomy, the pituitary gland, or hypophysis, is an endocrine gland, about the size of a chickpea and weighing, on average, 0.5 grams (0.018 oz) in humans. It is a protrusion off the bottom of the hypothalamus at the base of the brain. The hypophysis rests upon the hypophyseal fossa of the sphenoid bone in the center of the middle cranial fossa and is surrounded by a small bony cavity covered by a dural fold. 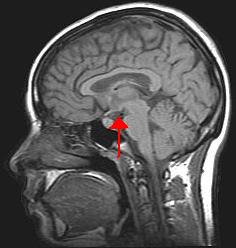 The hypothalamus is a part of the brain that contains a number of small nuclei with a variety of functions. One of the most important functions is to link the nervous system to the endocrine system via the pituitary gland. The hypothalamus is located below the thalamus and is part of the limbic system. In the terminology of neuroanatomy, it forms the ventral part of the diencephalon. All vertebrate brains contain a hypothalamus. In humans, it is the size of an almond.

A tripeptide is a peptide derived from three amino acids joined by two or sometimes three peptide bonds. As for proteins, the function of peptides is determined by the constituent amino acids and their sequence. The simplest tripeptide is glycine.In terms of scientific investigations, the dominant tripeptide is glutathione (γ-L-Glutamyl-L-cysteinylglycine), which serves many roles in many forms of life. 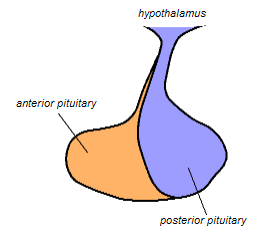 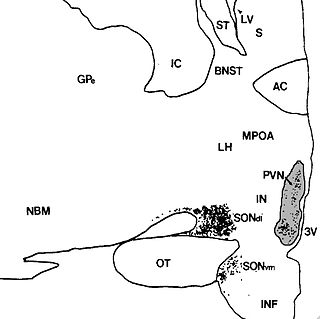 The paraventricular nucleus is a nucleus in the hypothalamus. Anatomically, it is adjacent to the third ventricle and many of its neurons project to the posterior pituitary. These projecting neurons secrete oxytocin and a smaller amount of vasopressin, otherwise the nucleus also secretes corticotropin-releasing hormone (CRH) and thyrotropin-releasing hormone (TRH). CRH and TRH are secreted into the hypophyseal portal system and act on different targets neurons in the anterior pituitary. PVN is thought to mediate many diverse functions through these different hormones, including osmoregulation, appetite, and the response of the body to stress.

Andrzej Viktor "Andrew" Schally is an American endocrinologist of Polish ancestry, who was a corecipient, with Roger Guillemin and Rosalyn Sussman Yalow, of the Nobel Prize in Physiology or Medicine. This award recognized his research in the discovery that the hypothalamus controls hormone production and release by the pituitary gland, which controls the regulation of other hormones in the body. Later in life Schally utilized his knowledge of hypothalamic hormones to research possible methods for birth control and cancer treatment.

Neuroendocrine cells are cells that receive neuronal input and, as a consequence of this input, release messenger molecules (hormones) into the blood. In this way they bring about an integration between the nervous system and the endocrine system, a process known as neuroendocrine integration. An example of a neuroendocrine cell is a cell of the adrenal medulla, which releases adrenaline to the blood. The adrenal medullary cells are controlled by the sympathetic division of the autonomic nervous system. These cells are modified postganglionic neurons. Autonomic nerve fibers lead directly to them from the central nervous system. The adrenal medullary hormones are kept in vesicles much in the same way neurotransmitters are kept in neuronal vesicles. Hormonal effects can last up to ten times longer than those of neurotransmitters. Sympathetic nerve fiber impulses stimulate the release of adrenal medullary hormones. In this way the sympathetic division of the autonomic nervous system and the medullary secretions function together.

Neurophysin I is a carrier protein with a size of 10 KDa and contains 90 to 97 amino acids. It is a cleavage product of preprooxyphysin. It is a neurohypophysial hormone that is transported in vesicles with oxytocin, the other cleavage product, along axons, from magnocellular neurons of the hypothalamus to the posterior lobe of the pituitary. Although it is stored in neurosecretory granules with oxytocin and released with oxytocin, its biological action is unclear.