Year 1482 ( MCDLXXXII ) was a common year starting on Tuesday (link will display the full calendar) of the Julian calendar.

Year 1490 (MCDXC) was a common year starting on Friday of the Julian calendar.

Year 1485 (MCDLXXXV) was a common year starting on Saturday of the Julian calendar.

Year 1406 (MCDVI) was a common year starting on Friday of the Julian calendar. 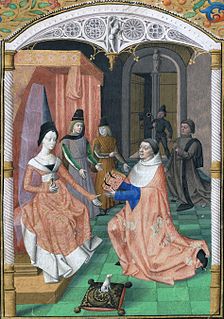 Yolande of Valois was a Duchess consort of Savoy by marriage to Duke Amadeus IX of Savoy, and regent of Savoy during the minority of her son Philibert I of Savoy from 1472 until 1478. She was named after her grandmother, Yolande of Aragon. She is sometimes known as Yolande of France.

Habsburg Netherlands, in Latin referred to as Belgica, is the collective name of Renaissance period fiefs in the Low Countries held by the Holy Roman Empire's House of Habsburg. The rule began in 1482, when the last Valois-Burgundy ruler of the Netherlands, Mary, married Maximilian I of Austria. Their grandson, Emperor Charles V, was born in the Habsburg Netherlands and made Brussels one of his capitals.

Margrave Philip I of Baden took over the administration of his father's possessions Baden (Baden-Baden), Durlach, Pforzheim and Altensteig and parts of Eberstein, Lahr and Mahlberg in 1515 and ruled as governor until he inherited the territories in 1527. From 1524 till 1527, he also acted as an imperial governor in the second Imperial Government. 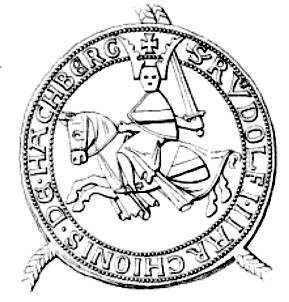 Margrave Rudolf I of Hachberg-Sausenberg (d.1313) was the son of Margrave Henry II of Hachberg and Anne of Üsenberg. He married in 1298 or 1299 to Agnes, the heiress of Otto of Rötteln. In 1306 he founded the side-line Hachberg-Sausenberg at Sausenburg Castle, a castle which the Margraves of Hachberg had built in 1240 on top of Mount Sausenberg. His elder brother Henry III continued the main Baden-Hachberg line at Hochburg castle in Emmendingen.

Rudolf I may refer to:

Rudolph III or Rudolf III may refer to: