A dihedron is a type of polyhedron, made of two polygon faces which share the same set of n edges. In three-dimensional Euclidean space, it is degenerate if its faces are flat, while in three-dimensional spherical space, a dihedron with flat faces can be thought of as a lens, an example of which is the fundamental domain of a lens space L(p,q). [1] Dihedra have also been called bihedra, [2] flat polyhedra, [3] or doubly covered polygons. [3]

As a spherical tiling, a dihedron can exist as nondegenerate form, with two n-sided faces covering the sphere, each face being a hemisphere, and vertices on a great circle. It is regular if the vertices are equally spaced.

As a flat-faced polyhedron

A dihedron can be considered a degenerate prism whose two (planar) n-sided polygon bases are connected "back-to-back", so that the resulting object has no depth. The polygons must be congruent, but glued in such a way that one is the mirror image of the other. This applies only if the distance between the two faces is zero; for a distance larger than zero, the faces are infinite polygons (a bit like the apeirogonal hosohedron's digon faces, having a width larger than zero, are infinite stripes).

Dihedra can arise from Alexandrov's uniqueness theorem, which characterizes the distances on the surface of any convex polyhedron as being locally Euclidean except at a finite number of points with positive angular defect summing to 4π. This characterization holds also for the distances on the surface of a dihedron, so the statement of Alexandrov's theorem requires that dihedra be considered as convex polyhedra. [4]

Some dihedra can arise as lower limit members of other polyhedra families: a prism with digon bases would be a square dihedron, and a pyramid with a digon base would be a triangular dihedron.

As a tiling of the sphere

The regular polyhedron {2,2} is self-dual, and is both a hosohedron and a dihedron. 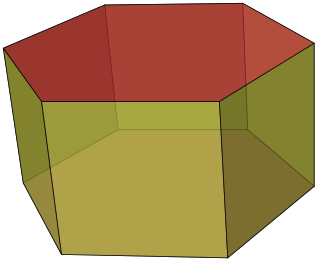 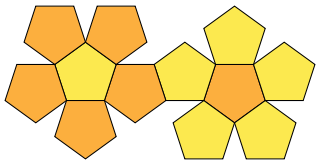 In spherical geometry, an n-gonalhosohedron is a tessellation of lunes on a spherical surface, such that each lune shares the same two polar opposite vertices. 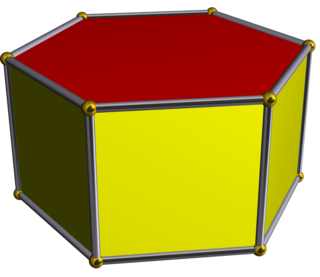 In geometry, a monogon, also known as a henagon, is a polygon with one edge and one vertex. It has Schläfli symbol {1}. 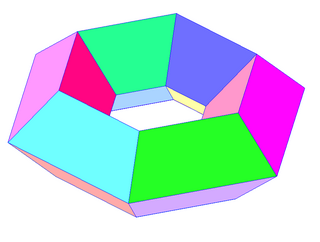