The stream drains the south eastern and eastern slopes of Flagstaff, Kaikorai Hill and the Balmacewen area, flows through Kaikorai Valley and Green Island and empties into Kaikorai Estuary. The water catchment area is 4,100 hectares (10,000 acres) and has about 15,000 residents. [1] There are two branches both sometimes known as 'Kaikorai Stream'.

The branch of the Kaikorai Stream which flows through Balmacewen has its source in the Otago Golf Club's Balmacewen Golf Course. [2] From here the stream flows mainly through culverts below Bishopscourt, a group of playing fields used by the Kaikorai Rugby Football Club and an intermediate school.

Below Bishopscourt, the culvert opens into a stream through the Shetland St Community Garden and Kaikorai Common. On either side are a marae and a retirement village. A pond and areas of swamp and forest and a community garden have been developed here in a wetland conservation project of the Dunedin Environment Centre Trust. [3] This land was originally intended for a highway.[ citation needed ]

The stream is piped through the suburb of Kaikorai, past the Kaikorai Presbyterian Church and beneath social housing built on the former Kaikorai Cable Car depot. It continues partly in open stream but mainly in pipes up to 100 years old maintained by Dunedin City Council through private residential property. [4]

The Kaikorai Stream culvert is joined by tributaries from Halfway Bush, then empties into the much larger Fraser's Creek.

Fraser's Creek provides the bulk of the Kaikorai Stream's flow, and superficially appears to be the "main" river. Excess water (brought here by pipeline from Deep Stream in the Taieri River catchment) is discharged from a city water reservoir. [5] This spilling has taken place since the mid 1970s, providing a source of cool, clear water of high quality that would otherwise not be available in the Kaikorai catchment. In dry weather, about two thirds of the flow of the Kaikorai Stream comes from this outflow. [1] Fraser's Creek flows through Fraser's Gully, a popular recreation reserve clad in native bush.

From the confluence the Kaikorai Stream flows southwest down the wide Kaikorai Valley through the suburbs of Bradford and Kenmure. At Bradford the stream flows through the Roslyn Woollen Mills, a former textile mill where according to legend the colour of blankets being made could be determined by the hue of the river water. [2]

Many industries in Kaikorai Valley discharge waste water into the stream. [2] The industrial area here is one of the few stretches of river with esplanade reserves (providing public access) along its banks. [7]

At Burnside the river turns west through Green Island, mainly in a channel lined with concrete alongside the Dunedin Southern Motorway.

Below Green Island, the stream is joined by major tributary Abbots Creek then resumes a southwest course, reaching the Pacific Ocean at Waldronville, where its outflow is a lagoon, the Kaikorai Estuary. This lagoon is part of a research project aimed at establishing a national estuarine monitoring protocol. It is inhabited by black swans, and spoonbills are also sometimes observed.

Though only a short stream some 18 kilometres (11 mi) in length, it has been important to the industrial history of Dunedin. Many local industries have used power from the stream, most notably the Roslyn Mills.

In 1987, the Otago Regional Council launched a streamscape restoration programme which included restoration of riparian vegetation and public access to parts of the stream. [8] In 1996 the Dunedin City Council redeveloped its sanitary landfill at Green Island to reduce leachate in the Kaikorai Stream, while in the same year the Dunedin Environment Centre began restoration work at four sites along the stream. [8]

In 1849 settler Samual Woolley described the stream as of the 'purest water." [8] In 1907 The Otago Daily Times described the Kaikorai Stream as "a long continuous sewer" and "a sanitary scandal." [9] A century later, the paper described the stream as a "little battler". [1] while an Otago Regional Councillor described this and other Dunedin streams' water quality as "basically crap." [10] The pollution was, to a large extent, the result of the heavy industrialisation of the lower course of the stream, particularly around Burnside, which was the site of a freezing works and cement factory. Other industries which used the streams waters in the early days of Dunedin's settlement included tanneries, stockyards, a flour mill, Kempthorne Prosser's chemical plant, and the Otago Iron Rolling Mills. [11]

The water quality worsens as the stream gets closer to the sea. [12] Macroinvertebrates found in the estuary indicate the water is degraded, while more sensitive species exist near Kaikorai Valley College and the situation improves further upstream. [12]

Major pollution events include an accidental spill of lime from the Dunedin City Council water treatment plant at Mount Grand in 2000 which "killed all aquatic life" including 1,000 trout [13] for which the council was fined NZD14,000, [14] and a discharge of cooking oil from a KFC restaurant in 2011 [15] for which Restaurant Brands was fined NZD15,000. [16]

The stream cuts through late Cretaceous-Tertiary sedimentary and igneous rocks and Quaternary floodplain conglomerate and colluvium. In the area of Kaikorai Valley College the bedrock is the Altonian (Lower Miocene) (c.17 Ma millions years ago) Caversham Sandstone. [17]

The name 'Kaikorai' is a corruption of 'kai karae', Māori for 'eating petrels', referring to a Māori explorer whose party is said to have eaten these seabirds while camping at the mouth of the stream. [18] The stream does not have an official name [19] but "official" maps name Fraser's Creek as Kaikorai Stream and do not give any label to the watercourse through Balmacewen. [20] A Land Information New Zealand report on misspelt names suggests the name "should be Kaikarae". [21] 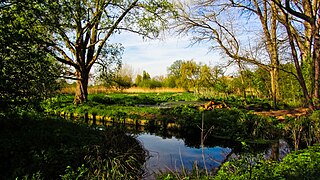 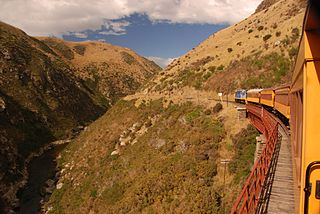 The Dunedin cable tramway system was a group of cable tramway lines in the New Zealand city of Dunedin. It is significant as Dunedin was the second city in the world to adopt the cable car. 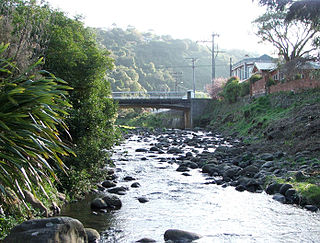 The Water of Leith, is a small river in the South Island of New Zealand.

The Silver Stream is a small river flowing close to the town of Mosgiel in Otago, New Zealand. 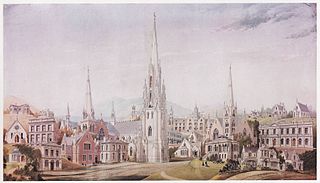 The villages and then city that lay at the head of Otago Harbor never existed in isolation, but have always been a staging ground between inland Otago and the wider world. While Dunedin's current official city limits extend north to Waikouaiti, inland to Middlemarch and south to the Taieri River mouth, this articles focus is the history of the Dunedin urban area, only mentioning Mosgiel, the Otago Peninsula, Port Chalmers and inland Otago for context. 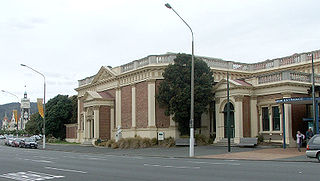 The Toitū Otago Settlers Museum is a regional history museum in Dunedin, New Zealand. Its brief covers the territory of the old Otago Province, that is, New Zealand from the Waitaki River south, though its main focus is the city of Dunedin. It is New Zealand's oldest history museum.

The Dunedin Botanic Garden is located at the northern end of central Dunedin, in the South Island of New Zealand. The garden is close to the University of Otago and one of the city's most historic cemeteries, the Northern Cemetery, on a spur of Signal Hill and on the river plain immediately below it. 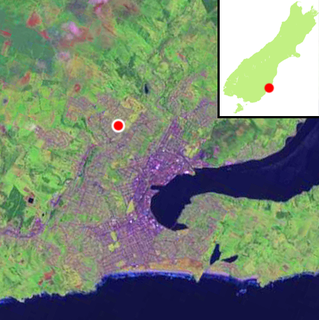 Ōpoho is a suburb of the New Zealand city of Dunedin. It sits on the western flank of Signal Hill, New Zealand, 3 kilometres (1.9 mi) to the northeast of the city centre, overlooking North East Valley and the Dunedin Botanic Gardens. 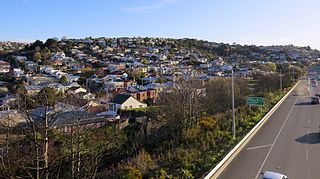 Calton Hill is an elevated southern residential suburb of the City of Dunedin in New Zealand's South Island. The suburb is named after Calton Hill in Edinburgh, Scotland, and some of its street names carry similar etymological roots. It covers an area of approximately 80 hectares and has 627 households comprising 1583 residents.

The Ross Creek Reservoir is an artificial lake in Dunedin, New Zealand. One of the oldest artificial lakes in the country, and the oldest water supply reservoir still in use in the country, it was created in the 1860s to provide water for the city of Dunedin, at that time in the middle of rapid expansion due to the Otago goldrush. Designed by engineer Ralph Donkin and supervising builder David Proudfoot, the reservoir was opened in 1867 as the Royal Albert Reservoir, but the name was unpopular and it has been known as the Ross Creek Reservoir for over a century.

Roslyn is a major residential and retail suburb of the New Zealand city of Dunedin. It is located 150 metres (490 ft) above the city centre on the ridge which runs in a crescent around the central city's western edge. It is 2.5 kilometres (1.6 mi) to the northwest of the city centre, immediately above the Town Belt. Roslyn's 2020 population was 3,048.

Burnside is a mainly industrial suburb of the New Zealand city of Dunedin. It is located at the mouth of a long valley, the Kaikorai Valley, through which flows the Kaikorai Stream. This valley stretches to the northeast for 3.5 kilometres (2.2 mi). Burnside is 5.5 kilometres (3.4 mi) to the southwest of the city centre, close to eastern end of the much larger suburb, Green Island. Other suburbs located nearby include Concord, immediately to the southeast and Kenmure further up Kaikorai Valley.

Leith Saddle is a saddle between the sources of the Water of Leith and the Waitati River, approximately halfway between Dunedin's northern suburb of Pine Hill and the outlying settlement of Waitati. The saddle is a strategic point where the Dunedin Northern Motorway, part of State Highway 1 traverses a fragile alpine forest. Proposed road works to straighten a dangerous corner here conflict with conservation values. Water supply pipelines, and popular tramping and cycling routes also converge at the saddle.

The cyclone of 1929 was an unnamed tropical cyclone that struck New Zealand in mid-March 1929 causing widespread flooding and destruction.