Last updated November 26, 2020
Stream or river that flows into a main stem river or lake
This article is about a lesser flow of water. For other uses, see Tributary (disambiguation).

A tributary [1] or affluent [2] is a stream or river that flows into a larger stream or main stem (or parent) river or a lake. [3] A tributary does not flow directly into a sea or ocean. [4] Tributaries and the main stem river drain the surrounding drainage basin of its surface water and groundwater, leading the water out into an ocean.

A confluence, where two or more bodies of water meet together, usually refers to the joining of tributaries.

The opposite to a tributary is a distributary, a river or stream that branches off from and flows away from the main stream. [5] Distributaries are most often found in river deltas.

In the United States, where tributaries sometimes have the same name as the river into which they feed, they are called forks. These are typically designated by compass direction. For example, the American River in California receives flow from its North, Middle, and South forks. The Chicago River's North Branch has the East, West, and Middle Fork; the South Branch has its South Fork, and used to have a West Fork as well (now filled in).

Forks are sometimes designated as right or left. Here, the "handedness" is from the point of view of an observer facing upstream. For instance, Steer Creek has a left tributary which is called Right Fork Steer Creek.

Another method is to list tributaries from mouth to source, in the form of a tree structure, stored as a tree data structure.[ citation needed ]

The Madeira River is a major waterway in South America. It is estimated to be 1,450 km (900 mi) in length, while the Madeira-Mamoré is estimated near 3,250 km (2,020 mi) or 3380 km in length depending on the measuring party and their methods. The Madeira is the biggest tributary of the Amazon, accounting for about 15% of the water in the basin. A map from Emanuel Bowen in 1747, held by the David Rumsey Map Collection, refers to the Madeira by the pre-colonial, indigenous name Cuyari:

The River of Cuyari, called by the Portuguese Madeira or the Wood River, is formed by two great rivers, which join near its mouth. It was by this River, that the Nation of Topinambes passed into the River Amazon. 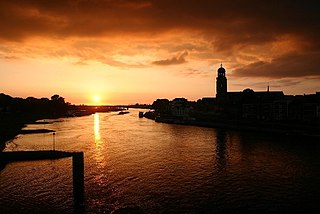 The Ĳssel is a Dutch distributary of the river Rhine that flows northward and ultimately discharges into the Ĳsselmeer, a North Sea natural harbour. It more immediately flows into the east-south channel around the Flevopolder, Flevoland which is kept at 3 metres below sea level. This body of water is then pumped up into the Ĳsselmeer. 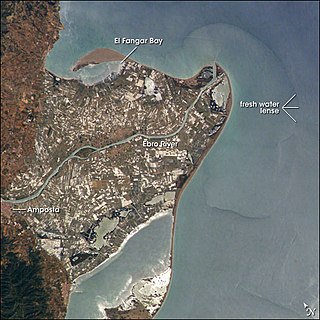 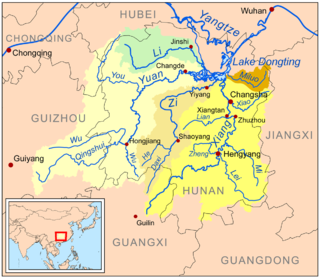 The Salmon River is located in Idaho in the western United States, also known as "The River of No Return." It flows for 425 miles (685 km) through central Idaho, draining a rugged, thinly populated watershed of 14,000 square miles (36,000 km2). The river drops more than 7,000 feet (2,100 m) from its headwaters, near Galena Summit above the Sawtooth Valley in the Sawtooth National Recreation Area, to its confluence with the Snake River. Measured at White Bird, its average discharge is 11,060 cubic feet per second. It is one of the largest rivers in the continental United States without a single dam on its mainstem. 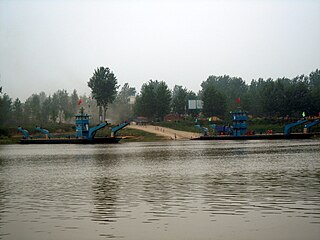 The Huai River, formerly romanized as the Hwai, is a major river in China. It is located about midway between the Yellow River and Yangtze, the two largest rivers in China, and like them runs from west to east. Historically draining directly into the Yellow Sea, floods have changed the course of the river such that it is now a major tributary of the Yangtze. The Huai is notoriously vulnerable to flooding. 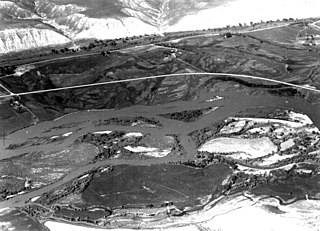 The Payette River is an 82.7-mile-long (133.1 km) river in southwestern Idaho and is a major tributary of the Snake River.

A river island is any exposed land surrounded by river water. Properly defined it excludes shoals between seasonally varying flows and may exclude semi-coastal islands such as in deltas. 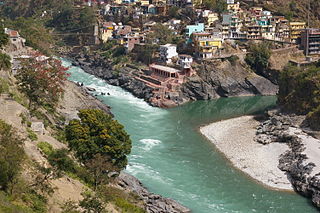 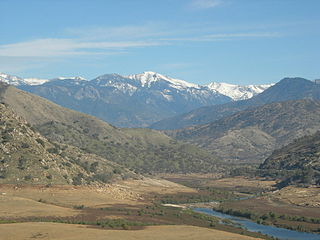 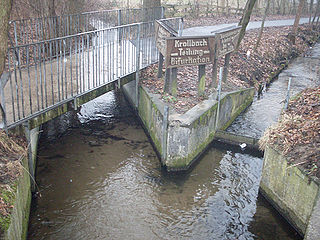 River bifurcation occurs when a river flowing in a single stream separates into two or more separate streams which continue downstream. Some rivers form complex networks of distributaries, especially in their deltas. If the streams eventually merge again or empty into the same body of water, then the bifurcation forms a river island. 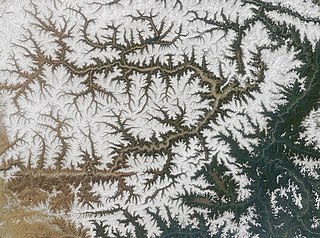 In geomorphology, drainage systems, also known as river systems, are the patterns formed by the streams, rivers, and lakes in a particular drainage basin. They are governed by the topography of the land, whether a particular region is dominated by hard or soft rocks, and the gradient of the land. Geomorphologists and hydrologists often view streams as part of drainage basins. This is the topographic region from which a stream receives runoff, throughflow, and its saturated equivalent, groundwater flow. The number, size, and shape of the drainage basins varies and the larger and more detailed the topographic map, the more information is available. 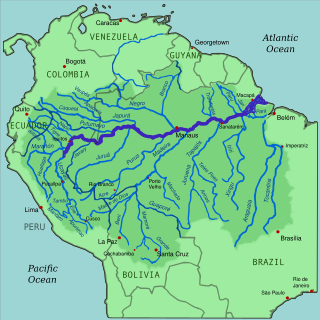