Kollam, known historically as Quilon, was an ancient trade hub and one of the largest port cities in Asia. [8] [9] The population density of the coastal belt of Kollam is very high compared to any other city in the state. After the constitution of Kochi, it became a corporation in 1967 as there were intense demands to upgrade the densely populated Kollam City into a City Corporation. As a result, on 1 October 2000, Kollam Municipality was upgraded to a Municipal Corporation by the Kerala Government.

The City Corporation of Kollam has a 55-member council headed by a mayor, who is assisted by a deputy mayor. [13] The average population of every ward is around 7,000. Each ward is represented in the Municipal Council by an elected councilor. The Kerala Municipalities (KM) Act, 1994, governs all functions in the KMC. [10] The Corporation has eight standing committees for smooth governance of the city. [14] Each of these committees is headed by an elected councilor, who serves as its chairperson. [15] [16] The standing committees are: Finance, Development, Welfare, Health and Education, Public works, Town planning, Tax appeal and Education and Sports.

The KMC consists of 55 divisions or councils spread across its seven zones.

In 2014, Mrs. Prasanna Earnest, then-mayor of Kollam was selected as the Best Lady Mayor of South India by the Rotary Club of Trivandrum Royal. [18]

As per the Kerala Municipal Act of 1994, the Government of Kerala transferred powers and functions to local self-governments in 1995, along with institutions, offices, and functionaries. Consequently, 18 functions are maintained by the Municipal Corporation: [10] [19]

The following are the Income sources for the Corporation from the Central and State Government. [20] [21] [22]

Following is the Tax related revenue for the corporation.

Following is the Non Tax related revenue for the corporation.

The first local body election after Kollam municipality was upgraded to a corporation took place in 2000.

Since the incorporation of the KMC in 2000, only the LDF has been in power.

A budget will be presented on either January or February month of every year in Kollam Corporation. It usually envisages expenditure, revenue and surplus for that financial year.

The Chinnakada underpass is a public road infrastructure project for the city of Kollam, as part of the Kerala Sustainable Urban Development Project. It is supported by the Asian Development Bank (ADB) to ease traffic congestion at Chinnakada, the city CBD of Kollam. [40] The presence of an existing railway over-bridge and three close intersections with heavy traffic limits options for traffic management measures, including junction improvement. This caused the authorities to conceptualize the underpass at Chinnakada. Chinnakada is a complex junction where roads from Thiruvananthapuram, Alappuzha, Downtown, Sengottai, Ashramam (Residency Road), Kollam Beach and the City bus stand road meet.

The preliminary design prepared for the underpass by the National Transportation Planning and Research Centre (NATPAC) involved the acquisition of 0.08 hectares (0.20 acres) of government land on a temporary basis. [41] The height of the road passage above the underpass was increased to 5.5 metres (18 ft) from 5 metres (16 ft) to facilitate movement of modern container trucks through the underpass. The underpass was opened to the public at the end of May 2015. [42] [43]

On 22 June 2014, construction work started on a marine aquarium at Kollam Beach—the first of its kind in the state of Kerala. The Harbour Engineering Department constructed the aquarium on the eastern side of the beach for the KMC. The foundation stone for the project was laid in March 2014 and it was inaugurated on 14 July 2019. The aquarium has 24 tanks worth Rs. 25 lakh, a pool with a 12,000-litre capacity, and 18 varieties of fish. The facility is open to the public in the evenings. [44] [45]

Kureepuzha is a peninsula region in the city of Kollam, Kerala, India, located on the shore of Ashtamudi Lake. Kureepuzha is sharing borders with the village of Neeravil in the north. It is one among the 55 councils of Kollam Municipal Corporation(KMC). Kerala's only turkey farm and a regional poultry farm are at Kureepuazha. Kollam city's waste management plant is also situated at Kureepuzha.

Chinnakada or Chinnakkada is considered as the heart of the city of Kollam in Kerala, India. Chinnakada is a busy junction where 5 city roads and one National highway interconnect at a traffic roundabout. The city's symbolic clock tower is located in Chinnakada. To reduce the traffic congestion in Chinnakada, Kollam Municipal Corporation constructed an underpass near to clock tower. Marine Products Export Development Authority (MPEDA)'s Kollam sub-regional office is situated at Chinnakada. 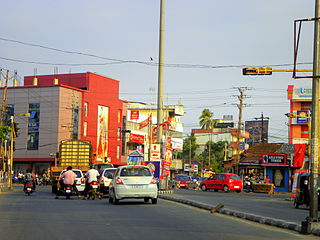 Kadappakada or Kadappakkada is a neighbourhood and important junction in the city of Kollam, in the state of Kerala, India. NH 744, that connects Kollam with Tirumangalam meets the Asramam Link Road at Kadappakada junction. Most of the times the authorities are diverting the traffic in National Highways through the Link road, if required.

Andamukkam City bus stand, Kollam, is one of the two bus stands in the city of Kollam in the Indian state of Kerala. Situated in the Downtown Kollam area, it is also known as Andamukkam private bus stand. The bus stand is only for private city buses and Kerala State Road Transport Corporation (KSRTC) ordinary bus services running to Chinnakada. It is the starting point of various city bus services connecting Chinnakada to Mayyanad, Elampalloor, Sakthikulangara, Chavara, Thoppilkadavu, Prakkulam, Kottiyam, Perumon and Kadavoor. KSRTC have plans to start an operations centre at the bus station. 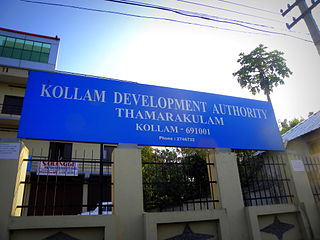 Kilikolloor, also known as Kilikollur, is a neighbourhood in Kollam district in Kerala, India. It is a center of the cashew industry in the area, and is also a hub of automobile production. 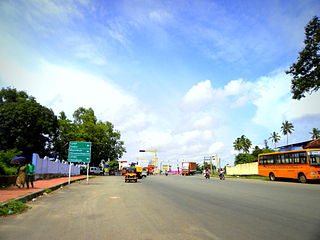 The Asramam Link Road is an important four-lane city road in Kollam in the Indian state of Kerala. This road was formerly known as Airport Road or Aerodrome Road as it was the connection road to Kollam Airport, the one and only airport in the entire Kerala coast then. The road starts from Kappalandimukku near Polayathode in the east and currently ends at KSRTC, but is ultimately planned to extend to Thoppilkadavu in the west of the city. The Rs.114 crore worth third phase of construction includes a 3 km long flyover, which would extend it from Kollam KSRTC Bus Station to Thoppilkadavu, is going on now. 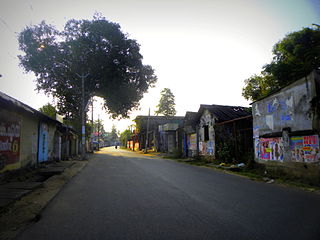 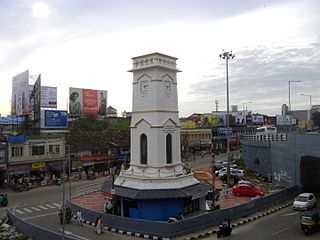 Chinnakada Clock Tower is a landmark in Kollam City in the Indian state of Kerala. In Chinnakada, the tower lies in the heart of the city, close to Kollam Junction Railway Station. As the first clock tower in the erstwhile Travancore state, it has become a non-official emblem of the city and the major landmark of Kollam.

Kollam or Quilon is an old seaport and a city on the Laccadive Sea coast in Kerala, India, on Ashtamudi Lake. The city remains notable as the ancient commercial capital of Kerala and the southwestern Indian coast, in addition to its fame as the "Cashew Capital of the World". The Kollam Municipal Corporation has the second largest budget in Kerala in terms of revenue and expenditure.

Cutchery or Taluk Cutchery or Taluk Kacheri is a neighbourhood of the city of Kollam. It is the 49th ward in Kollam Municipal Corporation. The place got the name Cutchery from a similar word in Malayalam: കച്ചേരി which means office/court. Kollam Taluk office is situated at Cutchery.

Ayathil is a neighbourhood in Vadakkevila zone of Kollam city, Kerala, India. It is the 36th ward in Kollam Municipal Corporation. It is one of the cashew processing hubs in Kollam city. Kerala State Cashew Development Corporation Limited has a factory there. Kollam Bypass passes through Ayathil.

Valathungal or Valathumgal is a neighbourhood and suburb of Kollam city in the Indian state of Kerala. It is the 30th ward in Kollam Municipal Corporation. Valathungal is a fairly densely populated area of the city. Eravipuram railway station is very close to Valathungal.

Mahatma Gandhi Park is a public park situated near Kollam Beach in the city of Kollam, Kerala, India. It is about 2 km away from Chinnakada - The city centre of 'Cashew Capital of the World'. It is one of the main centres of recreational activities in Kollam city. The park is owned by Kollam Municipal Corporation and is operated by Rural Tourism Development Company (RUTODEC), a private firm, on contract for a period of five years for maintenance. 'The Quilon Beach' five star hotel(Formerly known as Beach Orchid) is located near to this park.

Vallikeezhu or Vallikeezh is a neighbourhood situated at the northern region of Kollam city. It is about 5 km away from Chinnakada, the city centre of Kollam. Vallikeezhu is the 5th ward in Kollam Municipal Corporation council.

Wikimedia Commons has media related to Kollam Municipal Corporation .
This page is based on this Wikipedia article
Text is available under the CC BY-SA 4.0 license; additional terms may apply.
Images, videos and audio are available under their respective licenses.