Lowbrow, or lowbrow art, is an underground visual art movement that arose in the Los Angeles, California area in the late 1960s. [1] It is a populist art movement with its cultural roots in underground comix, punk music, tiki culture, graffiti, and hot-rod cultures of the street. [2] It is also often known by the name pop surrealism. [3] Lowbrow art often has a sense of humor – sometimes the humor is gleeful, impish, or a sarcastic comment. [4]

Most lowbrow artworks are paintings, but there are also toys, digital art, and sculpture.

Some of the first artists to create what came to be known as lowbrow art were underground cartoonists like Robert Williams and Gary Panter. Barry McGee, Margaret Killgalen, Dan "Plasma" Rauch and Camilla Elke were amongst the first to pioneer Lowbrow as a street art, zine, fashion, graffiti, and counter culture movement. The purpose of the lowbrow movement was to take an unorthodox approach to art and to completely defy its "rules". This resulted in pushback from significant individuals and organizations in the art industry. [5] Early shows were in alternative galleries in New York and Los Angeles such as Psychedelic Solutions Gallery in Greenwich Village, New York City which was run by Jacaeber Kastor, [6] La Luz de Jesus run by Billy Shire [7] and 01 gallery in Hollywood, run by John Pochna. [6] The movement steadily grew from its beginning, with hundreds of artists adopting this style. As the number of artists grew, so did the number of galleries showing lowbrow. In 1992 Greg Escalante helped orchestrate the first formal gallery exhibition to take lowbrow art seriously; painter Anthony Ausgang's solo show "Looney Virtues” at the Julie Rico Gallery in Santa Monica. The Bess Cutler Gallery also went on to show important artists and helped expand the kind of art that was classified as lowbrow. The lowbrow magazine Juxtapoz , launched in 1994 by Robert Williams, Greg Escalante, and Eric Swenson, has been a mainstay of writing on lowbrow art and has helped shape and expand the movement. [8]

In an article in the February 2006 issue of his magazine Juxtapoz, Robert Williams took credit for originating the term "lowbrow art". He stated that in 1979 Gilbert Shelton of the publisher Rip Off Press decided to produce a book featuring Willams' paintings. Williams said he decided to give the book the self-deprecating title The Lowbrow Art of Robt. Williams, since no authorized art institution would recognize his type of art. "Lowbrow" was thus used by Williams in opposition to "highbrow". He said the name then stuck, even though he feels it is inappropriate. Williams refers to the movement as "cartoon-tainted abstract surrealism." [9] Lately, Williams has begun referring to his own work as "Conceptual Realism". [10]

There are several books which offer overview histories of lowbrow, including the following: 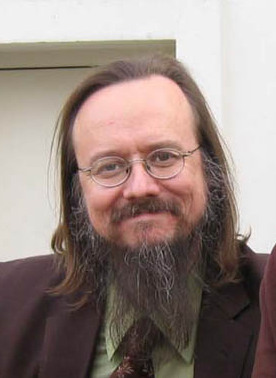 Mark Ryden is an American painter who is considered to be part of the Lowbrow art movement. He was dubbed "the god-father of pop surrealism" by Interview magazine. Artnet named Ryden and his wife, the painter Marion Peck, the King and Queen of Pop Surrealism and one of the ten most important art couples in Los Angeles.

Robert L. Williams, often styled Robt. Williams, is an American painter, cartoonist, and founder of Juxtapoz Art & Culture Magazine. Williams was one of the group of artists who produced Zap Comix, along with other underground cartoonists, such as Robert Crumb, S. Clay Wilson, and Gilbert Shelton. His mix of California car culture, cinematic apocalypticism, and film noir helped to create a new genre of psychedelic imagery. 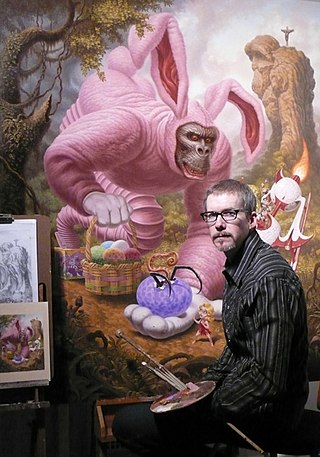 Todd Schorr is an American artist and member of the "Lowbrow" art movement or pop surrealism. Combining a cartoon influenced visual vocabulary with a highly polished technical ability, based on the exacting painting methods of the Old Masters, Schorr weaves intricate narratives that are often biting yet humorous in their commentary on the human condition. 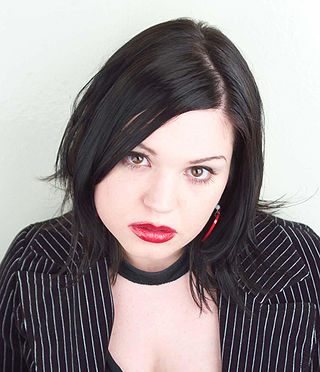 Jessicka Addams is an American visual artist and retired musician. Best known by her stage name Jessicka, she was the frontwoman for the alternative rock band Jack Off Jill, and later for the noise-pop band Scarling.

Merry Akane Karnowsky is a Los Angeles art dealer and gallerist of Japanese and Polish-German ancestry.

Jonathan LeVine is an American art dealer, instrumental in the proliferation of lowbrow and street art on the East Coast of the United States.

Brian Sherwin is an American art critic, writer, and blogger with a degree from Illinois College in 2003. Sherwin is a founding Management Team member of the artist social networking site myartspace, where he also served as Senior Editor for six years. As Senior Editor for myartspace.com Sherwin established an extensive interview series with emerging and established visual artists. Sherwin currently writes for FineArtViews and is the editor of The Art Edge. Sherwin is also an advocate for youth art education.

01 Gallery is a contemporary art gallery located in downtown Los Angeles, California, U.S., founded by art dealer and curator John Pochna. The gallery is known for its contributions to the lowbrow art movement, as it frequently exhibits pieces with heavy graffiti and street art influences. In April 2007, Pochna partnered with Brandon Coburn, and Jim Ulrich.

Alex Gross is a visual artist currently working in Los Angeles, California. He specializes in oil paintings on canvas whose themes include globalization, commerce, beauty, dark mayhem, and the passage of time.

Joe Ledbetter is an American artist and art toy designer from Los Angeles. He is considered part of the Pop Surrealism, Lowbrow Art Movement and Art and Designer Toys movement.

Mark Bryan is an American painter. Bryan's work travels in two distinct directions. Satirical works of social, political and religious comment and works which take an inward track to the imagination and subconscious. Humor and parody play a large role in many of his paintings. Style elements and influences in his work include classical painting, illustration, Romanticism, Surrealism and Pop Surrealism.

Anthony Ausgang is an artist and writer born in Pointe-à-Pierre, Trinidad and Tobago in 1959 who lives and works in Los Angeles. Ausgang is a principal painter associated with the lowbrow art movement, one of "the first major wave of lowbrow artists" to show in Los Angeles in the early 1980s. The protagonists of his paintings are cats -- "psychedelic, wide eyed, with a kind of evil look in their eyes".

R. Kalynn Campbell Jr, is an American artist, illustrator, cartoonist and writer/poet. He is best known for his work in the Lowbrow/Kustom Kulture movement, wherein he has been referred to as 'one of the most influential of the California Lowbrow artists'. As an illustrator, he created album/CD covers for notable bands like Megadeth, Reverend Horton Heat, and Social Distortion. His political cartoons were a fixture in Paul Krassner's 'The Realist' magazine from 1985 to 2001.

Sunny Buick is a French-American painter who participated in the Lowbrow Pop Surrealism movement of California, USA from 1996 to 2003. Buick currently lives and works in Paris, France. She also was also a figure in the Rockabilly/Swing and Tiki revival movements. A painter and tattoo artist, she was part of the second wave of lowbrow artists in California. Her work being recognized by the leading magazine of the movement Juxtapoz and a book about the women in the movement, Vicious, Delicious and Ambitious by Sherri Cullison. She was the first person to introduce authentic American old school tattooing in France.