The term was coined by writer, curator and Los Angeles Times art critic Jules Langsner, along with Peter Selz, in 1959, [3] to describe the work of painters from California, who, in their reaction to the more painterly or gestural forms of Abstract expressionism, adopted a knowingly impersonal paint application and delineated areas of color with particular sharpness and clarity. This approach to abstract painting became widespread in the 1960s, though California was its creative center.

Other, earlier, movements, or styles have also contained the quality of hard-edgedness, for instance the Precisionists also displayed this quality to a great degree in their work. Hard-edge can be seen to be associated with one or more school of painting, but is also a generally descriptive term, for these qualities found in any painting. Hard-edged painting can be both figurative or nonrepresentational.

In the late 1950s, Langsner and Peter Selz, then professor at the Claremont Colleges, observed a common link among the recent work of John McLaughlin (1898–1976), Lorser Feitelson (1898-1978), Karl Benjamin (1925-2012), Frederick Hammersley (1919–2009) and Feitelson's wife Helen Lundeberg (1908-1999). The group of seven gathered at the Feitelson's home to discuss a group exhibition of this nonfigurative painting style. Curated by Langsner, Four Abstract Classicists opened at the San Francisco Museum of Art in 1959, then traveled to the Los Angeles County Museum of Art in Exposition Park. Helen Lundeberg was not included in the exhibit. [4] These painters were featured in a touring exhibition during 2008 called "The Birth of the Cool" in California museums along with midcentury design, music and film. [5]

Four Abstract Classicists was subtitled California Hard-edge by British art critic and curator Lawrence Alloway when it traveled to England and Ireland. The term came into broader use after Alloway used it to describe contemporary American geometric abstract painting featuring "economy of form," "fullness of color," "neatness of surface," and the nonrelational arrangement of forms on the canvas.

In 2000, Tobey C. Moss curated Four Abstract Classicists Plus One at her gallery in Los Angeles. The exhibit again featured John McLaughlin, Feitelson, Hammersley, and Benjamin, and added Lundeberg as the fifth of the original Hard-edge painters. In 2003, Louis Stern Fine Arts showed a retrospective exhibition for Lorser Feitelson entitled Lorser Feitelson and the invention of Hard-edge painting, 1945-1965. The same year, NOHO MODERN showed the works of June Harwood in an exhibition entitled June Harwood: Hard-edge painting Revisited, 1959-1969. Art critic Dave Hickey solidified the place of these 6 artists in: The Los Angeles School: Karl Benjamin, Lorser Feitelson, Frederick Hammersley, June Harwood, Helen Lundeberg, and John McLaughlin. The exhibition was held at the Ben Maltz Gallery of the Otis Art Institute in Los Angeles in 2004-2005.

Post-surrealism is a movement that arose in Southern California in 1934 when Helen Lundeberg and Lorser Feitelson wrote a manifesto explaining their desire to use art to convey the relationship between the perceptual and the conceptual. 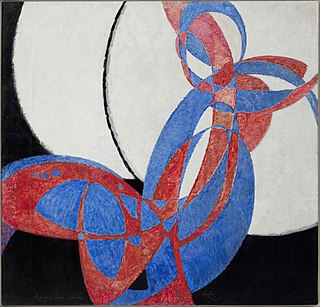 Geometric abstraction is a form of abstract art based on the use of geometric forms sometimes, though not always, placed in non-illusionistic space and combined into non-objective (non-representational) compositions. Although the genre was popularized by avant-garde artists in the early twentieth century, similar motifs have been used in art since ancient times. 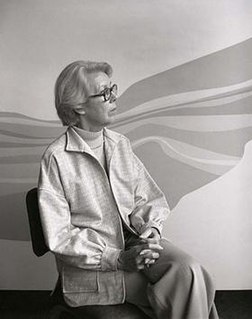 Helen Lundeberg (1908–1999) was a Southern Californian painter. Along with her husband Lorser Feitelson, she is credited with establishing the Post-Surrealist movement. Her artistic style changed over the course of her career, and has been described variously as Post-Surrealism, Hard-edge painting and Subjective Classicism. 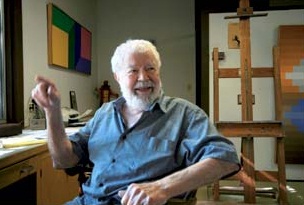 Karl J. Benjamin was an American painter of vibrant geometric abstractions, who rose to fame in 1959 as one of four Los Angeles-based Abstract Classicists and subsequently produced a critically acclaimed body of work that explores a vast array of color relationships. Working quietly at his home in Claremont, CA, he developed a rich vocabulary of colors and hard-edge shapes in masterful compositions of tightly balanced repose or high-spirited energy. At once intuitive and systematic, the artist is, in the words of critic Christopher Knight, "a colorist of great wit and inventiveness."

Harry Carmean is an American painter known for his figurative paintings based on the work of the old masters. The ideas of the Renaissance, Baroque, Mannerist and Impressionist art can all be seen in his work to varying degrees. He is known for practicing a form of drawing known as "draughstmanship" in which specific art ideas are consistently applied throughout a drawing. He was an instructor at Art Center College of Design from 1952 through 1996 and has taught thousands of students. 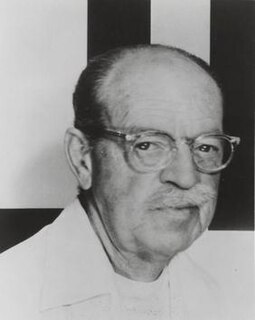 John Dwyer McLaughlin was an American abstract painter. Based primarily in California, he was a pioneer in minimalism and hard-edge painting. Considered one of the most significant Californian postwar artists, McLaughlin painted a focused body of geometric works that are completely devoid of any connection to everyday experience and objects, inspired by the Japanese notion of the void. He aimed to create paintings devoid of any object hood including but not limited to a gestures, representations and figuration. This led him to the rectangle. Leveraging a technique of layering rectangular bars on adjacent planes, McLaughlin creates works that provoke introspection and, consequently, a greater understanding of one's relationship to nature.

Meg Linton is an American curator of contemporary art and a writer. Her curatorial efforts have ranged from historical investigations such as "Doin’ It in Public: Feminism and Art at the Woman’s Building", "The Los Angeles School: Karl Benjamin, Lorser Feitelson, Frederick Hammersley, June Harwood, Helen Lundeberg, John McLaughlin", and "In the Land of Retinal Delights: The Juxtapoz Factor" to showcasing the work of single artists who are stylistically different such as "Alison Saar: STILL.. .", "Robert Williams: Through Prehensile Eye," and "Joan Tanner: On Tenderhook" to group exhibitions such as "Mexicali Biennial 2010," "Do It Now: Live Green!" and "Tapping the Third Realm."

Frederick Hammersley was an American abstract painter. His participation in the 1959 Four Abstract Classicists exhibit secured his place in art history.

Post-painterly abstraction is a term created by art critic Clement Greenberg as the title for an exhibit he curated for the Los Angeles County Museum of Art in 1964, which subsequently travelled to the Walker Art Center and the Art Gallery of Toronto.

Miriam Slater is an American artist who paints both objects and paintings. She studied painting at California State University Fullerton. After graduating in 1975 she began exhibiting in Los Angeles in pivotal shows such as “Imagination” curated by Llyn Foulkes at LAICA. She developed large celebrity cliental including Jack Nicholson, Brooke Astor, Quincy Jones and Jeff Bridges. From 1980-1990 she studied figure drawing with Harry Carmean at Art Center College of Design in Pasadena and exhibited at the Tobey Moss Gallery in Los Angeles with Lorser Feitelson and Helen Lundeberg.

Eva Slater, a Hard-Edge artist was born in Berlin, Germany in 1922 and studied art at the Lette-Verein Academy. After World War II ended she moved to the United States where she worked as a fashion illustrator in New York City. After meeting her husband, John Slater, they moved to Los Angeles, California where she began studying painting at Art Center School of Design. It was there that she met Lorser Feitelson who founded the Los Angeles-based hard-edge art movement. Slater became a prominent member of the hard-edge movement from 1950 through the late 1960s.

Elizabeth McCord was an American modernist painter whose colorful biomorphic and architectural abstractions influenced the hard-edge movement of the 1950s and were uniquely poised at the intersection of Southern California’s thriving mid-century art, design, and architecture scenes. Her work frequently appeared in shows at the Los Angeles County Museum of Art, the Long Beach Museum of Art, the Los Angeles Art Association, and the Art Center College of Design alongside works by Lorser Feitelson, Helen Lundeberg, Josef Albers, June Wayne, and Knud Merrild, among others.

Louis Stern Fine Arts is an art gallery located at 9002 Melrose Avenue in West Hollywood, California, in the heart of the city’s Avenue of Art and Design.

June Harwood was an American painter based in California who made a name for herself in the 1960s as an inventive artist of the hard-edge movement.

"Four Abstract Classicists" was a landmark exhibition organized by Jules Langsner in 1959. The show featured the work of Karl Benjamin, Lorser Feitelson, Frederick Hammersley, and John McLaughlin. The term “abstract classicists” was coined in 1959 by Langsner to define these four southern California painters.

Gerrie J. Gutmann, also known as Gerrie Current, Gerrie von Pribosic, Gerrie Bollas (1921–1969) was an American post-surrealist painter from California. The imagery in her paintings was fantasy and often overlapped with autobiographical themes, expressing her struggles for an identity as a woman, an artist, and a mother.

Stickney Memorial Art School, also known as Stickney Art Institute and Stickney Memorial School of Fine Arts, was an art school in operation between c.1912 until 1934 in Pasadena, California. The school was an early precursor to the Norton Simon Museum, founded in 1969.