The zygomatic process of the maxilla [2] (malar process) is a rough triangular eminence, situated at the angle of separation of the anterior, zygomatic, and orbital surfaces.

This process is at first directed lateralward, its two surfaces looking upward and downward; it then appears as if twisted inward upon itself, and runs forward, its surfaces now looking medialward and lateralward.

The superior border is long, thin, and sharp, and serves for the attachment of the temporal fascia.

The inferior border, short, thick, and arched, has attached to it some fibers of the masseter.

Processes of the zygomatic bone

The zygomatic bone itself has four processes, namely the frontosphenoidal, orbital, maxillary and temporal processes.

The frontosphenoidal process is thick and serrated. The cranial suture between the frontal and zygomatic bone is found here. On its orbital surface, just within the orbital margin and about 11 mm below the zygomaticofrontal suture is a tubercle of varying size and form, but present in 95 per cent of skulls (Whitnall 43). This tubercle is not seen in the picture.

The orbital process is a thick, strong plate, projecting backward and medialward from the orbital margin. It is the gloomy area beneath the lac(rimal) and ethmoidal bones in the image.

The maxillary process presents a rough, triangular surface which articulates with the maxilla. It is the area below "zygomatic" in the image.

The temporal process, long, narrow, and serrated, articulates with the zygomatic process of the temporal. It is the process to the right of "zygomatic" in the image. 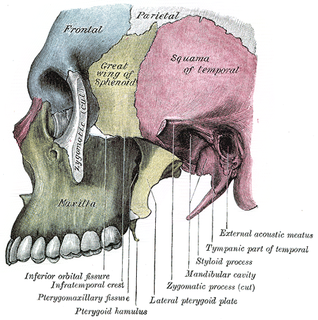 The maxilla in vertebrates is the upper fixed bone of the jaw formed from the fusion of two maxillary bones. In humans, the upper jaw includes the hard palate in the front of the mouth. The two maxillary bones are fused at the intermaxillary suture, forming the anterior nasal spine. This is similar to the mandible, which is also a fusion of two mandibular bones at the mandibular symphysis. The mandible is the movable part of the jaw.

In the human skull, the zygomatic bone is a paired irregular bone which articulates with the maxilla, the temporal bone, the sphenoid bone and the frontal bone. It is situated at the upper and lateral part of the face and forms the prominence of the cheek, part of the lateral wall and floor of the orbit, and parts of the temporal fossa and the infratemporal fossa. It presents a malar and a temporal surface; four processes, and four borders.

The sphenoid bone is an unpaired bone of the neurocranium. It is situated in the middle of the skull towards the front, in front of the basilar part of the occipital bone. The sphenoid bone is one of the seven bones that articulate to form the orbit. Its shape somewhat resembles that of a butterfly or bat with its wings extended. 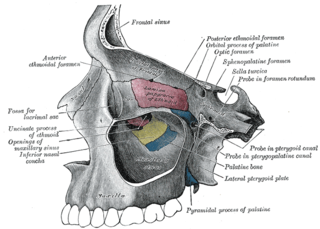 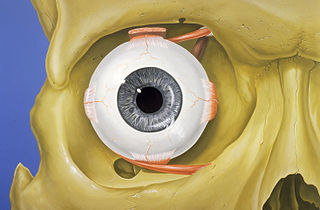 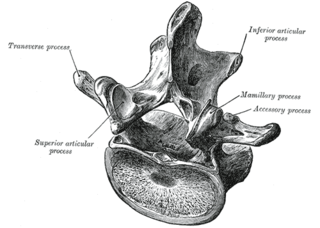 The temporal fossa is a fossa on the side of the skull bounded by the temporal lines and terminating below the level of the zygomatic arch.

The condyloid process or condylar process is the process on the human mandible and some other species' mandibles that ends in a condyle, the mandibular condyle. It is thicker than the coronoid process of the mandible and consists of two portions: the condyle and the constricted portion which supports it, the neck. 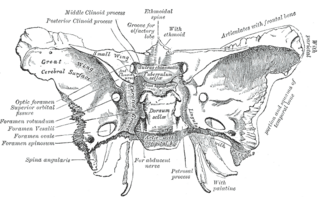 The lateral parts of the occipital bone are situated at the sides of the foramen magnum; on their under surfaces are the condyles for articulation with the superior facets of the atlas. 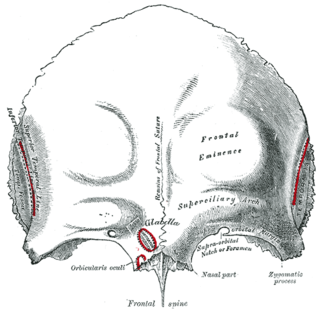 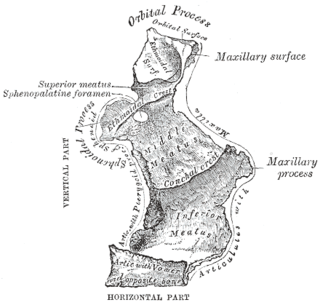 The sphenoidal process of the palatine bone is a thin, compressed plate, much smaller than the orbital, and directed upward and medialward.

The orbital process of the palatine bone is placed on a higher level than the sphenoidal, and is directed upward and lateralward from the front of the vertical part, to which it is connected by a constricted neck. It presents five surfaces, which enclose an air cell. Of these surfaces, three are articular and two non-articular. 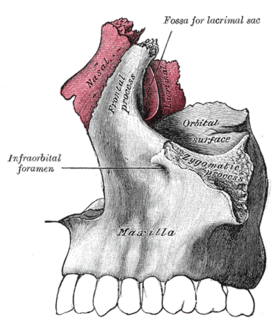 The frontal process of maxilla is a strong plate, which projects upward, medialward, and backward from the maxilla, forming part of the lateral boundary of the nose.

The pterygo-maxillary or zygomatic Fossa is an irregularly shaped cavity, situated below and on the inner side of the zygoma; bounded, in front, by the zygomatic surface of the superior maxillary bone and the ridge which descends from its malar process; behind, by the posterior border of the external pterygoid plate and the eminentia articularis; above, by the pterygoid ridge on the outer surface of the great wing of the sphenoid, and the under part of the squamous portion of the temporal; below by the alveolar border of the superior maxilla; internally, by the external pterygoid plate; and externally, by the zygomatic arch ramus of the lower jaw. It contains the lower part of the temporal, the external and internal pterygoid muscles, the internal maxillary artery and vein, and inferior maxillary nerve and their branches. At its upper and inner part may be observed two fissures, the spheno-maxillary and pterygo-maxillary.