Bixby is a city in Tulsa and Wagoner counties in the U.S. state of Oklahoma, and is a suburb of Tulsa. The population was 13,336 at the 2000 census and 20,884 in the 2010 census, an increase of 56.6 percent [7] In 2010, Bixby became the 19th largest city in Oklahoma. It is nicknamed "The Garden Spot of Oklahoma" for its rich agrarian heritage. Though one of the fastest growing communities in Oklahoma, it remains a sod-growing center and a popular location for purchasing fresh vegetables. The per capita income of $36,257 is the highest in the Tulsa Metropolitan area and is more than 50 percent higher than the state average. [8] In 2009, CNN Money.com placed Bixby No. 67 on its list of 100 Best Places to Live. [9]

Alexander Posey, a member of the Muscogee (Creek) Nation, and his family settled in the area now known as Bixby in the late 1800s. He founded a community that was initially known as "Posey on Posey Creek," and included two saloons, a blacksmith shop, and a general store. The town became a government townsite with a post office in 1895. Located in the Muscogee (Creek) Nation, Indian Territory, Bixby was named in honor of Tams Bixby, a chairman of the Dawes Commission. [10] The original 80-acre (32 ha) townsite plat was approved by the Dawes Commission in 1902. Many settlers were attracted to the area by the rich, though sometimes swampy river bottom land. In 1904 the Midland Valley Railroad laid tracks and built a depot about 1/2 mile north of the original town of Bixby. [11] This created factions that briefly split Bixby into two towns. The new part of town was deliberately surveyed so that the new streets did not align with the existing ones. However, businesses in the original town soon moved to the new location and built permanent brick buildings there. Bixby incorporated as an independent, self-governing town in 1906, with a population of 400 and an area of 160 acres (0.25 sq mi). [10] The first mayor, recorder and five aldermen were elected in February 1907. In 1911, a two-story brick schoolhouse was built on Main Street. Bixby Central Elementary is now near the original site. A traffic bridge was built over the Arkansas River in 1911, and for a time was said to be the longest bridge west of the Mississippi River.

Fry, a community located north of the original townsite but later annexed by Bixby, served the surrounding trade area when the only way to get across the Arkansas River was by way of the Shellenberger Ferry. Fry's post office operated from 1896 until 1909. [12]

The Bixby Bulletin, the town's first newspaper, began publication in February 1905. It continued publication until 2005. A second paper, the Bixby Journal existed only from 1907 until 1910. [10]

Bixby was impacted and enriched by the discovery of nearby natural gas deposits in 1905-1906 and oil fields in 1913, but farming remained the backbone of the community well into the 20th Century. [10] Early farmers focused on production of cotton, wheat and alfalfa in the rich river bottom. During the 1930s, truck farming of vegetables slowly replaced those crops. In 1941, Bixby became an important regional center for shipping produce by railroads. It was at that time that Bixby was christened with its nickname "The Garden Spot of Oklahoma," a designation still carried on the town seal and public vehicles. Cantaloupes, potatoes, radishes, squash, turnips, spinach and sweet corn were shipped from Bixby all over the U.S. In time, the majority of the truck farms were converted to the production of sod, typically Bermuda grass, or developed for residential and other purposes. Only a small percentage of Bixby residents now work in agriculture, but the town continues to celebrate its earthy roots with the yearly "Green Corn Festival" in June.

Another point of history commemorated by Bixby is the 1832 visit to the area by the famous American writer Washington Irving. Irving accompanied a U.S. Army exploration party on an excursion from Fort Gibson west onto the prairie and the lands occupied by the Osage and Pawnee tribes. He described his adventure in his book A Tour on the Prairies (1835). In it, he relates camping in a grove of large trees on the banks of the Arkansas River in what is present-day Bixby. The town has honored his visit by the creation of Washington Irving Park and Arboretum near the location. The park contains an amphitheatre stage patterned after the front facade of Irving's home, Sunnyside, in Tarrytown, New York, as well as gates near the park entrance that are replicas of ones at Irving's estate. A bronze statue of Washington Irving sits near the stage. Bixby Middle School drama students present a popular retelling of Irving's The Legend of Sleepy Hollow in the park each October. The park is also the location of the heavily attended "Bixby BBQ & Music Festival" each May and the Bixby "Deutschesfest" in September.

There were 7,658 households out of which 30.4% had children under the age of 18 living with them, 64.4% were married couples living together, 8.9% had a female householder with no husband present, and 22.6% were non-families. 19.2% of all households were made up of individuals and 7.9% had someone living alone who was 65 years of age or older. The average household size was 2.72 and the average family size was 3.12.

Bixby has a mayor-council form of government. [10]

Bixby has one newspaper, the Bixby Bulletin. The paper is published every Thursday. It is owned by Community Publishers, a newspaper and Internet publisher and commercial printer that serves Oklahoma, Missouri, and Arkansas.

Bixby Telephone Company, commonly known as BTC Broadband, is a well-known company in the Bixby community, and has been providing internet services since 1993 and telephone services since 1914. BTC Broadband is one of the first companies in Oklahoma to offer a gigabit connection over fiber optic cables to select neighborhoods. In addition to adding fiber optic support to existing neighborhoods, BTC Broadband is active in working with local developers to ensure select areas are pre-installed with fiber optic support.

Bixby has been used as the setting for at least two popular works of fiction. The best-selling novel Tex (1979) by S.E. Hinton tells the story of its title character, a troubled teen in rural Bixby. The 1982 film adaption, starring Matt Dillon, was filmed on location and features the Bixby High School as well as various other locations around the town. Also, the Midnighters trilogy (begun in 2004) by Scott Westerfeld tells the supernatural story of a group of five Bixby High School students. 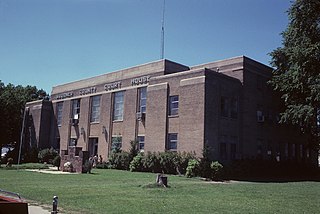 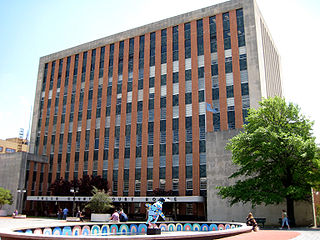 Tulsa County is a county located in the U.S. state of Oklahoma. As of the 2010 census, the population was 603,403, making it the second-most populous county in Oklahoma, behind only Oklahoma County. Its county seat and largest city is Tulsa, the second-largest city in the state. Founded at statehood, in 1907, it was named after the previously established city of Tulsa. Before statehood, the area was part of both the Creek Nation and the Cooweescoowee District of Cherokee Nation in Indian Territory.

Rogers County is a county located in the northeastern part of the U.S. state of Oklahoma. As of the 2010 census, the population was 86,905, making it the sixth-largest county in Oklahoma based on population. Its county seat is Claremore. Rogers County is included in the Tulsa, OK Metropolitan Statistical Area.

Pawnee County is a county located in the U.S. state of Oklahoma. As of the 2010 census, the population was 16,577. Its county seat is Pawnee. The county is named after the Pawnee Nation. 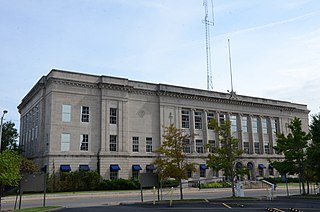 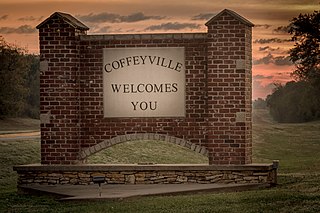 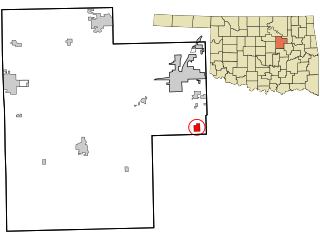 Poteau is a city in, and county seat of, Le Flore County, Oklahoma, United States. The population was 8,520 as of the 2010 census. 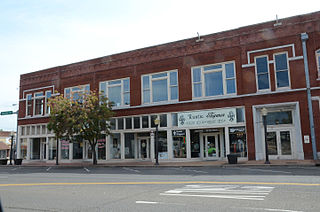 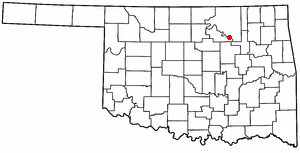 Prue is a town in southern Osage County, Oklahoma, United States. The population was 465 at the 2010 census, up 7.4 percent from 433 at the 2000 census. The town was named for Henry Prue, who owned the original townsite. Prue was relocated when Lake Keystone was built, and is sometimes called "New Prue". 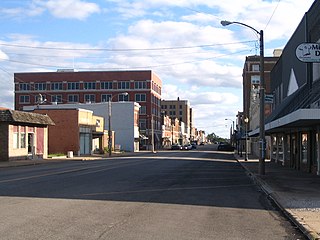 Miami is a city in and county seat of Ottawa County, Oklahoma, United States, founded in 1891. Lead and zinc mining established by 1918, caused it to boom. It is the capital of the Miami Tribe of Oklahoma, after which it is named, the Modoc Tribe of Oklahoma, Ottawa Tribe of Oklahoma, Peoria Tribe of Indians and Shawnee Tribe. As of the 2010 census, the city had 13,570 inhabitants, a one percent decline since 2000.

Glenpool is a city in Tulsa County, Oklahoma, United States. It is part of the Tulsa Metropolitan Statistical Area (TMSA). As of 2010, the population was 10,808. This was an increase of 33.1% since the 2000 census, which reported total population as 8,123.

Jenks is a city in Tulsa County, Oklahoma, United States, and a suburb of Tulsa, in the northeastern part of the state. It is situated between the Arkansas River and U.S. Route 75. Jenks is one of the fastest growing cities in Oklahoma. The city's population was 9,557 in the 2000 census, but by 2010, the population was 16,924, an increase of 77.1 percent. The Census estimated Jenks' population as 23,354 in 2018.

Coweta is a city in Wagoner County, Oklahoma, United States and is a suburb of Tulsa. As of 2010, the population was 9,943. Part of the Creek Nation in Indian Territory before Oklahoma became a U.S. state, the town was first settled in 1840. 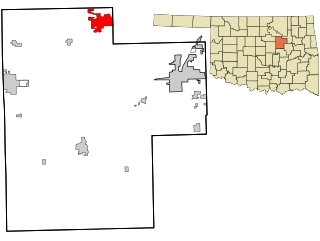 Mannford is a city in Creek County in the northeastern part of the U.S. state of Oklahoma. In 2010, the population was 3,076, up from 2,095 at the 2000 census. The city sits next to Keystone Lake and claims to be the "Striped Bass Capital of the World". 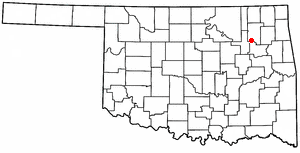 Collinsville is a city in Rogers and Tulsa counties in the U.S. state of Oklahoma, and a part of the Tulsa, Oklahoma Metropolitan Statistical Area. It was named for Dr. A. H. Collins, an engineer and surveyor who first surveyed the land that became this community. The population was 5,606 according to the 2010 census, an increase of 37.5 percent from 4,077 at the 2000 census.

Owasso is a city in Rogers and Tulsa Counties in the U.S. state of Oklahoma, and a northern suburb of Tulsa. The population was 28,915 at the 2010 census. Originally settled in 1881 in Indian Territory, the town incorporated in 1904 just prior to Oklahoma statehood and was chartered as a city in 1972. 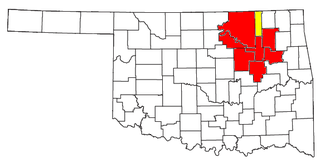 The Tulsa Metropolitan Area, officially defined as the Tulsa–Broken Arrow–Owasso Metropolitan Statistical Area is a metropolitan area in northeastern Oklahoma centered around the city of Tulsa and encompassing Tulsa, Rogers, Wagoner, Osage, Creek, Okmulgee and Pawnee counties. It has an estimated population of 991,005 and 1,251,172 people in the larger Combined Statistical area as of 2015.