Last updated April 15, 2021
This article is about only the executive branch, headed by the Prime minister. For all branches, see Politics of Russia.

The large body was preceded by Government of the Soviet Union. Since the Russian Federation emerged from 1991 to 1992, the government's structure has undergone several major changes. In the initial years, a large number of government bodies, primarily the different ministries, underwent massive reorganization as the old Soviet governing networks were adapted to the new state. Many reshuffles and renamings occurred.

On 28 November 1991, President of the RSFSR Boris Yeltsin signed presidential decree No.242 "On the reorganization of the government bodies of the RSFSR". Yeltsin officially declared the end of the Soviet Union and became the President of the Russian Federation. Yeltsin was a reformer and promised Western-styled democracy.

In 1993, the new Russian Constitution was adopted. The new Constitution gained legitimacy through its bicameral legislature, an independent judiciary, the position of the president and the prime minister, and democratic features. These democratic features included competitive multi-party elections, separation of powers, federalism, and protection of civil liberties.

In 1999, Yeltsin appointed Vladimir Putin as the Prime Minister. Later in that year, Yeltsin resigned from the presidency and Putin took over. In 2000 Putin won the presidential election.

See also: Order of the Government of Russia

The government issues its acts in the way of decisions (Постановления) and orders (Распоряжения). These must not contradict the constitution, federal constitutional laws, federal laws, and Presidential decrees, and are signed by the Prime Minister.

The Government, also assists the Prime Minister, in faithfully carrying out the country's domestic and foreign policy as determined by the President, in general. 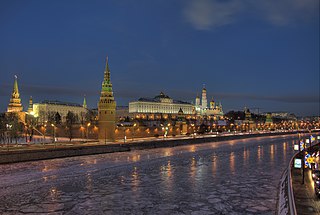 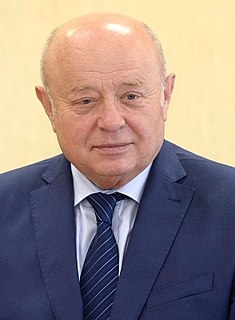 Mikhail Yefimovich Fradkov is a Russian politician who served as Prime Minister of Russia from 2004 to 2007. An Independent, he was the longest serving director of Russia's Foreign Intelligence Service from 2007 to 2016. Since 4 January 2017, Fradkov has been Director of the Russian Institute for Strategic Studies. 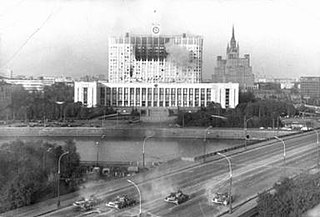 The Russian constitutional crisis of 1993 was a political stand-off between the Russian president Boris Yeltsin and the Russian parliament that was resolved by military force. The relations between the president and the parliament had been deteriorating for some time. The power struggle reached its crisis on 21 September 1993, when President Yeltsin intended to dissolve the country's highest body and parliament, although the constitution did not give the president the power to do so. Yeltsin justified his orders by the results of the referendum of April 1993. In response, the parliament declared the president's decision null and void, impeached Yeltsin and proclaimed vice president Aleksandr Rutskoy to be acting president. On 3 October, demonstrators removed police cordons around the parliament and, urged by their leaders, took over the Mayor's offices and tried to storm the Ostankino television centre. The army, which had initially declared its neutrality, stormed the Supreme Soviet building in the early morning hours of 4 October by Yeltsin's order, and arrested the leaders of the resistance. At the climax of the crisis, Russia was thought by some to be "on the brink" of civil war.The ten-day conflict became the deadliest single event of street fighting in Moscow's history since the Russian Revolution. According to the General Prosecutor's Office, 147 people were killed and 437 wounded.

The Federation Council is the upper house of the Federal Assembly of Russia, according to the 1993 Constitution of the Russian Federation. Each of the 85 federal subjects of Russia – consisting of 22 republics, 46 oblasts, nine krais, three federal cities, four autonomous okrugs, and one autonomous oblast – sends two senators to the Council, for a total membership of 170 Senators. In addition, the Constitution also provides for senators from the Russian Federation, which can be no more than thirty, as well as (optionally) former presidents as life senators.

Dmitry Anatolyevich Medvedev is a Russian politician serving as Deputy Chairman of the Security Council of Russia since 2020. Medvedev served as president from 2008 to 2012 and prime minister from 2012 to 2020.

Decommunization in Russia is the process of dealing with the communist legacies in terms of institutions and personnel that tends towards breaking with the Soviet past. Compared with the efforts of the other former constituents of the Eastern Bloc and the Soviet Union, it has been restricted to half-measures, if conducted at all.

The Congress of People's Deputies of the Russian SFSR and since 1991 Congress of People's Deputies of the Russian Federation was the supreme government institution in the Russian SFSR and in the Russian Federation from 16 May 1990 to 21 September 1993. Elected on 4 March 1990 for a period of five years, it was dissolved by presidential decree during the Russian constitutional crisis of 1993 and ended de facto when the Russian White House was attacked on 4 October 1993. The Congress played an important role in some of the most important events in the history of Russia during this period, such as the declaration of independence of Russia from the USSR, the rise of Boris Yeltsin, and economic reforms. 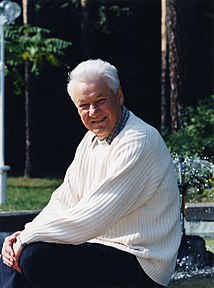 The Russian Presidency of Boris Yeltsin, was the executive branch of the federal government of the Russian Federation from June 12, 1991 to December 31, 1999.

The Order of precedence in Russia is listed below. The President of Russia, currently Vladimir Putin, is the highest-ranking office in Russia, followed by the Prime Minister of Russia, held by Mikhail Mishustin.

The amendments of 2020, which were proposed in January 2020, are the second substantial amendments to the Constitution of Russia of 1993. To introduce these amendments, Vladimir Putin, president of Russia, held a national vote. They were approved on 1 July 2020 by a contested popular vote.