The North Caucasus (Russian:Северный Кавказ, tr. Severnyy Kavkaz,IPA:  [ˈsʲevʲɪrnɨj kɐfˈkas] ), or Ciscaucasia (Russian:Предкавказье, tr. Predkavkazye), (Chechen : Къилбаседа Кавказ) is the northern part of the Caucasus region between the Sea of Azov and Black Sea on the west and the Caspian Sea on the east, in Russia. Geographically, the Northern Caucasus (territory north of the Greater Caucasus Range) includes the Russian republics and krais of the North Caucasus. As part of the Russian Federation, the Northern Caucasus region is included in the North Caucasian and Southern Federal Districts and consists of Krasnodar Krai, Stavropol Krai, and the constituent republics, approximately from west to east: the Republic of Adygea, Karachay–Cherkessia, Kabardino-Balkaria, North Ossetia–Alania, Ingushetia, Chechnya, and the Republic of Dagestan. [1]

Geographically, the term North Caucasus also refers to the northern slope and western extremity of the Caucasus Major mountain range, as well as a part of its southern slope to the West. North Caucasus is considered part of Eastern Europe. The Forecaucasus steppe area is often also encompassed under the notion of "Ciscaucasus", thus the northern boundary of the Forecaucasus steppe is generally considered to be the Manych River.

Ancient cultures of the northern Caucasus are known as Klin-Yar community, with the most notable culture being the ancient Koban culture. A genetic study in 2020 analysing samples from Klin-Yar communities, including the Koban culture, found that the ancient population had a low frequency (one sample) of paternal Haplogroup D-M55 (D1a2a1), which is surprising as this lineage is associated with the Ainu people. Other haplogroups were Haplogroup J1 and Haplogroup G-M285. [2]

Ciscaucasus was historically covered by the Pontic steppe, mostly on fertile calcareous chernozyom soils, which has been almost completely tilled and grazed. It is bounded by the Sea of Azov on the west, and the Caspian Sea on the east. According to the Concise Atlas of the World, Second Edition (2008), the Ciscaucasus region lies on the European side of the "commonly-accepted division" that separates Europe from Asia.

Much of the Northern Caucasus seceded from Russia in March 1917 as the Chechen-dominated Mountainous Republic of the Northern Caucasus, taking advantage of the instability caused by the February Revolution and becoming a minor participant in the Russian Civil War. Mountainous Republic troops engaged in fierce clashes against the invading White General Anton Denikin's Volunteer Army, before the latter's defeat at the hands of the Red Army. The region was informally occupied by the Soviet Union shortly afterwards, and the republic was forced into accepting a nonviolent annexation in January 1921. It was reformed into the Mountainous ASSR, which was later dissolved in October 1924, replaced by a series of autonomous Okrugs and Oblasts.

The outer border of the Soviet Union's North Caucasus Krai was the same as that of present-day North Caucasus Economic Region (Raion) which includes an oblast (Rostov Oblast), two krais (Krasnodar Krai and Stavropol Krai), and seven republics. The former North Caucasus Military District (Okrug) also included Astrakhan Oblast, Volgograd Oblast, and the Republic of Kalmykia. Its administrative center was Rostov-on-Don until 10 January 1934, Pyatigorsk until January 1936, then Ordzhonikidze (today Vladikavkaz) and, from 15 December 1936, Voroshilovsk (today Stavropol).

In 2011, the Russian government has put forward plans to create a "North Caucasian version of Silicon Valley", at a cost of 32 billion rubles ($1.1 billion) as part of ongoing efforts to generate opportunities in the region. [3]

The Republic of Adygea, also known as the Adyghe Republic, is a federal subject of Russia. It is geographically located in the North Caucasus region of European Russia, and is part of the Southern Federal District. Adygea covers an area of 7,600 square kilometers (2,900 sq mi), the fifth-smallest Russian federal subject by area, with its territory an enclave within Krasnodar Krai. Adygea has a population of 439,996. 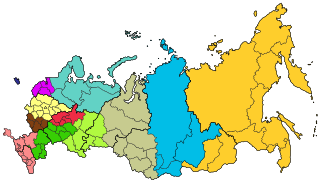 Kuban is a geographic region of Southern Russia surrounding the Kuban River, on the Black Sea between the Don Steppe, the Volga Delta and the Caucasus, and separated from the Crimean Peninsula to the west by the Kerch Strait. Krasnodar Krai is often referred to as "Kuban", both officially and unofficially, although the term is not exclusive to the krai and accommodates the republics of Adygea, Karachay-Cherkessia, and parts of Stavropol Krai.

Sovetsky, Sovetskaya or Sovetskoye is the name of several inhabited localities in Russia.

The terms Russians of the Caucasus; Caucasus Russians; Caucasian Russians; or Krasnodar Russians all refer to ethnic Russians living in the Caucasus. These terms are specific to a community of Russians because the North Caucasus is part of the Russian Federation, and Russians here are not outside of Russia, but they are in a part of Russia where as a whole Russians are an ethnic minority. The regions of Krasnodar Krai; Stavropol Krai; Astrakhan Oblast; and Rostov Oblast are not considered ethnic territories unlike most other Caucasian republics because they have a Russian majority, and they are part of Russia.

Mirny, Mirnaya, or Mirnoye is the name of several inhabited localities in Russia. 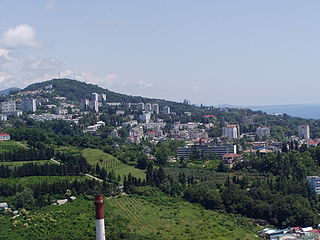 The ethnonym Adyghe is used as an endonym by the Caucasian-speaking Circassians of the North Caucasus. The name Adyghe is believed to derive from atté "height" to signify a mountaineer or a highlander, and ghéi "sea", signifying "a people dwelling and inhabiting a mountainous country near the sea coast", or "between two seas".

The Black Sea–Caspian Steppe is an informal name for that part of the Eurasian Steppe that extends south between the Black and Caspian Seas. It is usually treated as part of the Pontic–Caspian steppe which includes the area north of the Black and Caspian Seas, but there is some reason to treat it as a distinct place. Its natural boundaries are the Sea of Azov and Black Sea on the west, the Caucasus Mountains on the south and the Caspian Sea on the east. Its northern boundary may be taken as the triangle formed by the lower Don River and Volga River which are about 60 km apart to the west of Volgograd. This article excludes the north slope of the Caucasus which is not steppe and has a distinct geography and history.