An Olympic diploma is a paper certificate awarded to the top eight finishers in competitions at the Olympic Games. [1] While the top three finishers have received medals since the 1896 Olympics, in 1949 diplomas for athletes placing fourth, fifth, and sixth were established, and in 1981 diplomas for seventh- and eighth-place finishers were added. [2]

The diploma is inscribed and signed by autopen with the signatures of the president of the International Olympic Committee and the head of the organizing committee for each Olympics. [2] The design of the diploma, as with the design of the Olympic medals, must be approved by the IOC. [3]

An athlete who receives a diploma and is subsequently sanctioned for violations of the IOC Code of Ethics, the World Anti-Doping Code, or other charters must return the diploma to the IOC. [4] 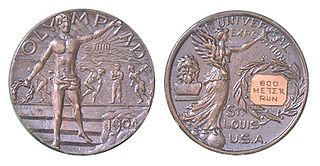 The 1904 Summer Olympics were held in St. Louis, Missouri, United States from July 1 to November 23, 1904, as part of the St. Louis World's Fair. A total of 651 athletes from 12 nations participated in 94 events in 16 sports at these games. This list includes medals awarded in each of those events, excluding those awarded in the sport of water polo, which is mentioned in the games reports for the 1904 Summer Olympics but which currently is not included in the International Olympic Committee's medal database. The United States won all three medals in that competition, with a New York team taking first place, a Chicago team taking second, and a team from Missouri taking third.

The 1896 Summer Olympics medal count is a list of National Olympic Committees ranked by the number of medals won during the 1896 Summer Olympics—the first Olympic Games of the Modern era—held in Athens, Greece, from 6 to 15 April 1896. A total of 241 athletes from 14 nations participated in 43 events in nine sports at these games.

The 1924 Winter Olympics, officially known as the I Olympic Winter Games, and known at the time as Semaine Internationale des Sports d'Hiver, was a winter multi-sport event held in Chamonix, France, from 25 January to 5 February 1924. Norway topped the table, collecting seventeen medals in total, including four gold, three of which were won by Thorleif Haug in the Nordic combined and cross-country skiing events. Norway also achieved two podium sweeps, winning all three medals in both the 50 km cross-country skiing and the Nordic combined. This remained a record at the Winter Olympics until 2014.

The Olympic medal table is a method of sorting the medal placements of countries in the modern-day Olympics and Paralympics. The International Olympic Committee (IOC) does not officially recognize a ranking of participating countries at the Olympic Games. Nevertheless, the IOC does publish medal tallies for information purposes, showing the total number of Olympic medals earned by athletes representing each country's respective National Olympic Committee. The convention used by the IOC is to sort by the number of gold medals the athletes from a country have earned. In the event of a tie in the number of gold medals, the number of silver medals is taken into consideration, and then the number of bronze medals. If two countries have an equal number of gold, silver, and bronze medals, they are ordered in the table alphabetically by their IOC country code. 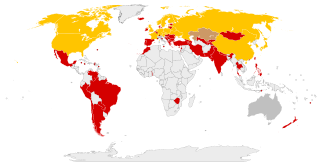 The women's tournament in ice hockey at the 2014 Winter Olympics was held in Sochi, Russia.