At the modern Olympic Games, up to and including the 2016 Summer Paralympics [update] , 10 athletes have died while either competing in or practicing their sport. In addition, another 14 participants have died at the Olympics from other causes; 11 of these deaths resulted from the Munich massacre of 1972.

Several incidents related to the Olympics have caused the death of non-participants. Large numbers were killed during the Lima football riot of 1964 and the Tlatelolco massacre in Mexico City in 1968. The Centennial Olympic Park bombing at the 1996 Games caused two deaths.

In competition during the Olympics

In competition during the Paralympics

During Olympic practice or after Olympic competition

In 1948, during the London Olympics, Eliška Misáková, one of nine members of the Czechoslovak women's team in gymnastics, became ill on arrival in the host city. Diagnosed with polio, she died on the last day of the Olympics, the same day her remaining teammates won the competition. [12]

Arrigo Menicocci, Italian rower who competed in eights, was killed as a passenger in a car crash about 90 km northwest of Melbourne during the Olympics on 1 December 1956, four days after the end of the rowing competition. [13]

In 1972, during the Munich Olympics, 11 members of the Israeli team were killed during a terrorist attack by Palestinian terrorists called Black September.

The 11 Israeli Olympic Team members who were murdered in the 1972 Olympic Games in Munich are:

Between the morning and afternoon runs of the men's giant slalom, Jörg Oberhammer, 47, the Austrian team doctor, was skiing on a recreational slope when he collided with another skier (a CTV technician) and was knocked under a snow-grooming machine, which crushed him instantly. [14] [15]

Deaths of non-participants at Olympic-related events

In a qualifying match for the Olympic football tournament, home fans began rioting after a late Peru goal was disallowed. Police fired tear gas into the crowd, exacerbating the situation, which ended with 318 deaths.

The Mexico 68 protests were part of a worldwide series of leftwing student-led protests. While the protesting National Strike Council claimed not to link its demands to the Olympics, some students protested at the perceived extravagance of hosting the games, and some sought to exploit the increased foreign media presence in the city for publicity. The authoritarian government had a secret "Olympia Battalion" to ensure security during the Games. Ten days before the games, the unit swept through a mass meeting in the Plaza de las Tres Culturas making arrests. Estimates of the number killed in the operation range from thirty to several hundred.

On 27 July 1996 (the eighth day of the 1996 Atlanta Summer Games), a bomb exploded at the Centennial Olympic Park in Atlanta, Georgia, killing two and wounding over 100 people.

Seven teenagers from Farkadona were killed in a crash whilst travelling to Athens for the Games, when their bus collided with a truck near the town of Kamena Vourla. Out of respect for their death, the cultural portion of the closing ceremonies of these Paralympics was cancelled. [16] [17]

A Hong Kong Police motorcyclist was on a VIP escort to Sheung Yue River for 2008 Olympic Equestrian events and was killed en route in a traffic collision. [18]

On 1 August 2012, a special bus carrying media from the London Olympic Park was involved in a collision in which a cyclist was killed. [19]

German Olympic coach Stefan Henze died on 15 August 2016 after his taxi was hit in a high-speed head-on collision in Rio. [20]

Estonia sent 28 athletes to the 2006 Winter Olympics in Turin, Italy. Half of them competed in cross-country skiing, where Estonia won all of their three Turin Olympic medals. Olympic champion Andrus Veerpalu participated on his 5th Winter Olympics. 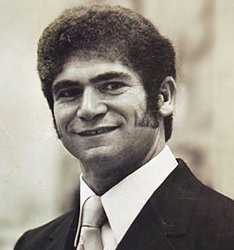 Yossef Romano was a Libyan-born Israeli weightlifter with the Israeli team that went to the 1972 Summer Olympics in Munich, West Germany. He was the second of eleven Israeli team members killed in the Munich massacre by Palestinian members of Black September during that Olympics. He was the Israeli weight-lifting champion in the light and middle-weight divisions for nine years.

Yossef Gutfreund was an Israeli wrestling judge for his country's 1972 Olympic team. He was murdered in the Munich massacre by Black September terrorists along with 10 other members of the Israeli team.

Colombia first participated at the Olympic Games in 1932, and has sent athletes to compete in all but one edition of the Summer Olympic Games since then, missing only the 1952 Games. Colombian athletes have won a total of 28 Olympic medals in eight different sports, with weightlifting and cycling as the most successful ones. Colombia is the third most successful South American country at the Olympic Games, after Brazil and Argentina respectively. The Colombian Olympic Committee was created in 1936 and recognised by the International Olympic Committee in 1948. 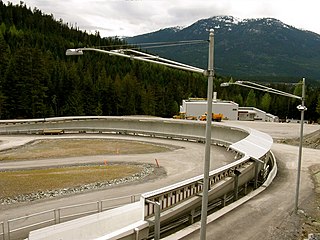 The Whistler Sliding Centre is a Canadian bobsleigh, luge, and skeleton track located in Whistler, British Columbia, that is 125 km (78 mi) north of Vancouver. The centre is part of the Whistler Blackcomb resort, which comprises two ski mountains separated by Fitzsimmons Creek. Located on the lowermost slope of the northern mountain, Whistler Sliding Centre hosted the bobsleigh, luge, and skeleton competitions for the 2010 Winter Olympics.

Georgia participated in the 2010 Winter Olympics in Vancouver, British Columbia, Canada. It marked the fifth time since gaining independence that Georgia sent a delegation, though it had previously competed since 1952 as a member of the Soviet Union. Eight athletes competed in three sports, with none of them winning a medal. On the day of the opening ceremony, Georgian luger Nodar Kumaritashvili died in an accident while practicing for the games. 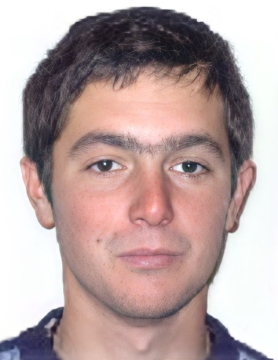 Nicolas Bochatay was a Swiss speed skier who died during the 1992 Winter Olympics. Bochatay was killed when he collided with a snow grooming vehicle on the morning of the speed skiing finals. He was the nephew of Olympic skier Fernande Bochatay.

A number of concerns and controversies at the 2010 Winter Olympics in Vancouver, British Columbia, Canada, surfaced before and during the Games, and which received media coverage.

Vinicius is the official mascot of the 2016 Summer Olympics, and Tom is the official mascot of the 2016 Summer Paralympics. Both events were held in Rio de Janeiro, Brazil. The mascots were created by São Paulo-based animation company Birdo, which was selected by a national tender process that began in November 2012. Vinicius' design represents Brazilian wildlife, combining aspects of cats, monkeys, and birds, while Tom's design represents Brazilian plant life.

Bahman Golbarnezhad was an Iranian Paralympic racing cyclist competing in C4 classification events and an earlier powerlifter. During his powerlifting career, he won twelve gold medals and one silver medal in international competitions. Golbarnezhad had represented Iran in two Summer Paralympic Games, first in 2012 in London and later in 2016 in Rio de Janeiro. He was the only Iranian cyclist at the 2016 Paralympics. He was a veteran of the Iran–Iraq war.