The Pacific Games (formerly known as the South Pacific Games) is a continental multi-sport event competing Olympic sports, with participation exclusively from archipelagic countries around the Pacific Ocean. It is held every four years and began in 1963.

The most recent Pacific Games was held in Apia, Samoa in July 2019.

The idea of holding the South Pacific Games originated with Dr A.H. Sahu Khan who was one of Fiji's representatives at a meeting of the South Pacific Commission held at Rabaul during 1959. The idea was adopted and led to a meeting of nine Territories, held in Nouméa during March 1961, which awarded Fiji the honour of hosting the very first Games. [1]

During 1962, the South Pacific Commission founded the South Pacific Games Council, with the first ever Games being held at Suva, Fiji. In the 40 years since, Games have been held in 12 countries and territories within the region. Initially the Games were held at three-year intervals although this was subsequently expanded to four following the Tumon Games in Guam.

As a residual consequence of the European colonisation of the Pacific from the early part of the 18th Century onwards, many nations who participated in the first Games (of 1963) were under predominantly British or French territorial rule. Understandably this generated a certain amount of confusion as both British and French flags and national anthems dominated proceedings and were occasionally used together for winning countries. Western Samoa (now Samoa) was the only country with a flag and anthem of its sovereignty as it was the only participating independent island nation at that time. As time went on, fledgling nations gradually achieving sovereignty of their own sought to extricate themselves from their colonial past and new national anthems and flags emerged. Nevertheless, English and French remain the official languages of the Games. [2]

Like other sporting events, the South Pacific Games has experienced slight controversies. A minor dispute that still continues today is the scheduling of events landing on a Sunday. Throughout the Pacific, the Christian Sabbath remains very important (sporting events or similar activity are illegal in Tonga for example) and scheduling at such a time would be frowned upon. The events themselves have also been affected by religious sensitivities, notably beach volleyball where the official uniform of bikinis for women has been forced to give way to more conservative attire. [3] However other larger nations within the region or those loosely associated with more secular states (e.g. Cook Islands (New Zealand), American Samoa (United States), and French Polynesia (France)) are more moderate in this regard.

Other global and regional events have also influenced and shaped the Games' history. In 1995, the year Papeete, Tahiti hosted the Games, many countries took the decision to boycott as a direct protest at French nuclear testing in the Pacific. [4] The Games, however, returned to near full regional participation in the following event in 1999, held on Guam.

The first objective of the Pacific Games Council, according to its Charter, [5] is

"To create bonds of kindred friendship and brotherhood amongst people of the countries of the Pacific region through sporting exchange without any distinctions as to race, religion or politics."

The XII South Pacific Games held in Suva, Fiji saw for the first time the introduction of a full program of 32 sports. [6] That program included sports that are synonymous with the Pacific region as well as sports that have a limited participation and are generally not well established.

A strong corporate sponsorship package a first for the games enabled the organizers to work with a free hand towards their aims of making the games a success. A colorful and effective media and publicity campaign generated much interest and enthusiasm among the public in Fiji. Schools and youth groups were involved in interactive programs such as the adopt-a-country program also a first for the games. [7]

The XIII Pacific Games were hosted in Apia, Samoa. They were the 13th to have been held since 1963. In contrast to the Olympic Games which are expected to generate income for the host nation, [8] the 2007 Pacific Games were expected to leave Samoa US$92million in debt, predominantly as a result of expenditure on large-scale infrastructure projects such as bridges and roads. [9]

Potential debt positions notwithstanding, five nations (Papua New Guinea, Vanuatu, Solomon Islands, Tonga and American Samoa) bid for the 2015 Pacific Games. The Games were ultimately awarded to Port Moresby, Papua New Guinea and follow the 2011 Pacific Games held in Nouméa, New Caledonia. However the rising cost (purportedly in excess of $1 billion) and the logistical burden of putting on the games continue to threaten countries' abilities to host the event. [10]

The games governing body is the Pacific Games Council. The Games council flag is presented to the host nation of the next games at the end of every games. With expansion and economic growth in the Pacific and Oceania countries of the Pacific Islands, the South Pacific Games Council decided to modernise and revise its charter in light of these changes in the region and the changing place of Sport in our society, thus the council adapted a new charter in 2007.

The current President of the Council is Vidhya Lakhan from Fiji.

15 members are also member associations of the Oceania National Olympic Committees (ONOC). [11] Since the 2015 games Australia and New Zealand participate in the Pacific Games.

In July 2014, the Oceania National Olympic Committees announced their members had voted to allow Australia and New Zealand to participate in four sports, on a provisional basis, in the 2015 Pacific Games. The risk of seeing the two wealthy, developed nations dominate the competition had previously prevented their inclusion. They would be allowed to send participants only in rugby sevens, sailing, taekwondo and weightlifting - sports where other Pacific countries had proved sufficiently competitive against them in the past. [12] 2023
Host cities of the Pacific Games

The number of Pacific Games core sports was increased from 14 to 16, [16] effective for the 2023 Games. This change was made in 2016, with Sailing and Triathlon being made core sports. [16] The core sports are required to be included at every edition of the games.

Details for each core sport, up to and including the 2019 games, are presented in the table below:

There are 21 sports optional for inclusion at a games, as selected by the host nation's organising committee. Details for each optional sport, up to and including the 2019 games, are presented in the table below:

^a The 3x3 format was added as an extra discipline for basketball in 2019 after being included at the Mini Games in 2017.

^b Volleyball and beach volleyball disciplines have been listed as one sport for the purposes of the Games program since some time after the bids for the XV Games (in conjunction with the maximum number of sports being reduced from 28 to 26 for the XVI Games). [17] [18]

^c Netball is a women's competition only.

^d Touch rugby is an optional sport but men's, women's and mixed tournaments must be included if touch rugby is selected.

Officially the final medal tally of the Games does not recognize a winner, regarding competition and fair play more highly. [7]

Australia and New Zealand were included in the all-time medal count for the first time after the 2015 Pacific Games in Port Moresby, Papua New Guinea. The table below includes all Games from 1963 to 2019.

Nation(s) in italics are defunct PGAs. 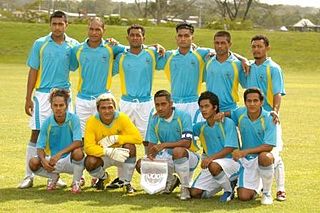 Tuvalu participates in the Pacific Games which is a multi-sport event with participation exclusively from countries in Oceania. Known as the South Pacific Games prior to 2009, the games are currently held every four years.

Athletics competitions at the 2007 Pacific Games were held at the Apia Park in Apia, Samoa, between September 3–8, 2007. A total of 45 events were contested, 23 by men and 22 by women. This year 6 games records were set.

The 1963 South Pacific Games, held from 29 August to 9 September 1963 at Suva in Fiji, was the first edition of the South Pacific Games. The multisport games were established to engender bonds of friendship amongst peoples in the Pacific, after an idea originated by Dr A.H. Sahu Khan was adopted by the South Pacific Commission. At a meeting of nine Territories, held in Nouméa during March 1961, Fiji was awarded the honour of hosting the first Games.

The 1991 South Pacific Games, held from 7–21 September 1991 at Port Moresby and Lae in Papua New Guinea, was the ninth edition of the South Pacific Games. This was the first time that events at one games had been held in two cities. The decision to do so was to allow both locations to benefit from the construction of new facilities.

Basketball is one of the 26 sports scheduled for the 2019 Pacific Games which will be held in Apia, Samoa.