List of people who have kept the Olympic flag

The Olympic Games are an international multi-sport event featuring both summer and winter sports, held every two years with Summer and Winter Olympic Games alternating. During Olympic Games closing ceremonies, the sitting president of the International Olympic Committee (IOC) received the flag from the mayor of the current host city to the mayor of the next host city. The current Olympic Charter requires this person to be the mayor of the next host city, [1] although this has not always been the case. This article lists the people who have had the ceremonial duty to pass the Olympic flag from one to another for them to keep until the closing ceremony of each games.

The IOC factsheet on the closing ceremony states: "The mayors of the current host city and next host city join the IOC President. The mayor of the host city hands the flag to the IOC President, who hands it on to the mayor of the next host city.". [2] The Olympic Charter sets out the exact drill that the flag are to be handed by the mayor of the current host city to the another of the next host city. Three flags were used at the Summer Olympics, the first called the Antwerp flag that was used from 1920 to 1984 when it showed signs of wear. The second is called the Seoul flag that was used from 1988 to 2012. In 2016, the Seoul flag was replaced by the Rio flag, which symbolizes the first edition of the Games that was held in South America. In the Winter Games, the flag used is the so-called PyeongChang flag, which was first used in 2018 to symbolize the first edition of the Winter Games held in mainland Asia. It replaced the Oslo flag that was used from 1952 to 2014. In some editions, a replica of it was used for conservation reasons. In the Summer Youth Olympic Games, the Singapore flag has been used since 2010, while in the Winter Youth Olympic Games, the Innsbruck flag is used. Also for conservation reasons, replicas are used.

Keeper of the Summer Olympic Flag

Keepers of the Winter Olympic Flag

The 1976 Summer Olympics, officially known as the Games of the XXI Olympiad and commonly known as Montréal 1976, were an international multi-sport event held from July 17 to August 1, 1976 in Montreal, Quebec, Canada. Montreal was awarded the rights to the 1976 Games at the 69th IOC Session in Amsterdam on May 12, 1970. Montreal is the second French speaking city to host the Summer Olympics after Paris, over the bids of Moscow and Los Angeles. It was the first and, so far, only Summer Olympic Games to be held in Canada. Toronto hosted the 1976 Summer Paralympics the same year as the Montreal Olympics, which still remains the only Summer Paralympics to be held in Canada. Calgary and Vancouver later hosted the Winter Olympic Games in 1988 and 2010, respectively.

The 1988 Summer Olympics, officially known as the Games of the XXIV Olympiad and commonly known as Seoul '1988, were an international multi-sport event held from 17 September to 2 October 1988 in Seoul, South Korea. 159 nations were represented at the games by a total of 8,391 athletes. 237 events were held and 27,221 volunteers helped to prepare the Olympics.

The 1988 Summer Paralympics, were the first Paralympics in 24 years to take place in the same city as the Olympic Games. They took place in Seoul, South Korea. This was the first time the term "Paralympic" came into official use. 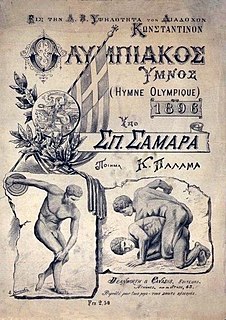 The Olympic Hymn, also known informally as the Olympic Anthem, is a choral cantata by opera composer Spyridon Samaras (1861–1917), with lyrics by Greek poet Kostis Palamas. Both poet and composer were the choice of the Greek Demetrius Vikelas, who was the first President of the International Olympic Committee.

The Closing Ceremony of the 1996 Summer Olympics took place on August 4, 1996, at the Centennial Olympic Stadium in Atlanta, United States at approximately 8:00 PM EDT (UTC−4). It was produced by Don Mischer. The official motto of the closing ceremony is "An American Day of Inspiration".

The 2008 Summer Olympics closing ceremony was held at the Beijing National Stadium, also known as the Bird's Nest. It was directed by Chinese filmmaker Zhang Yimou and began at 20:00 China Standard Time (UTC+8) on 24 August 2008. The number 8 is associated with prosperity and confidence in Chinese culture.

The 1994 Winter Olympics closing ceremony was held in Lysgårdsbakken in Lillehammer, Norway on 27 February 1994. All spectators were handed a flashlight with the inscription "Remember Sarajevo" – the host of the 1984 Winter Olympics which was at the heart of the Bosnian War. The first entrants on the stage were Liv Ullmann and Thor Heyerdal, followed by the athletes' precession. After the flag had been transferred to Nagano mayor Tasuku Tsukada, speeches were held by Lillehammer mayor Audun Tron, LOOC head Gerhard Heiberg and IOC president Juan Antonio Samaranch. The latter used his speech to commemorate Sarajevo's situation, before giving Heiberg the Olympic Order in gold, and declaring the games "the best Olympic Winter Games ever". Artistic presentations followed, revisiting many of the themes from the opening ceremony. The mascots of the 1998 Winter Olympics, the "Snowlets", were also presented. Of the 2,200 people performing in the opening and closing ceremonies, only 50 were professionals.

The closing ceremony of the 2018 Winter Olympics was held on 25 February 2018 from 20:00 to 22:05 KST (UTC+9). The ceremony took place at Pyeongchang Olympic Stadium in Pyeongchang County, South Korea.

The closing ceremony of the 2020 Summer Olympics is scheduled to take place in the Olympic Stadium, Tokyo on August 8, 2021. As mandated by the Olympic Charter, the proceedings combined the formal ceremonial closing of this international sporting event with an artistic spectacle to showcase the culture and history of the current and next host nation (France) for the 2024 Summer Olympics in Paris. 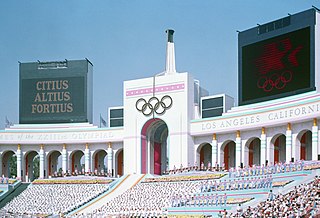 The opening ceremony of the 1984 Summer Olympic Games took place on the afternoon of Saturday 28 July in the Los Angeles Memorial Coliseum, Los Angeles. As mandated by the Olympic Charter, the proceedings combined the formal ceremonial opening of this international sporting event with an artistic spectacle to showcase the host nation's culture. The 1984 Games were formally opened by President Ronald Reagan. The spectacle was in front of 92,516 attendants. The ceremony was a $5 million production and titled Music of America.