The Oxley Creek (Yagara: Benarrawa [2] ) is a creek that is a tributary of the Brisbane River, located in suburban Brisbane in the South East region of Queensland, Australia.

Rising in the low hills in Scenic Rim Region, water from the 260-square-kilometre (100 sq mi) large catchment area [3] flows into Oxley Creek as it flows through the western parts of Logan City and into Brisbane. At 70 kilometres (43 mi), the Oxley Creek is Brisbane's longest creek and the only sand-based one in the city. [4]

Oxley Creek's upper catchment is sparsely populated and largely natural, with forested hills and grazing land. However, in other parts of the catchment, urban development has had great impact. In the middle and lower catchment, Oxley Creek and its tributaries flow through 28 Brisbane suburbs including Algester, Corinda, Darra, Durack, Forest Lake, Moorooka, Salisbury, Sunnybank Hills, Graceville and Sherwood. Major industrial areas of Acacia Ridge, Coopers Plains and Rocklea are located in the catchment, as well as waste water treatment plants at Oxley and Inala, and the vicinity of Archerfield Airport. [1]

Oxley Creek is crossed by the Ipswich Motorway and Logan Motorway. The creek is tidal upstream to the Ipswich Motorway crossing. [5] In the suburbs of Oxley, Corinda and Tennyson the lower reaches of the creek contain the Oxley Creek Canoe Trail and are bordered by houses, parks, a driving range and sports fields. In these areas it is heavily polluted. These winding areas for the creek's catchment are prone to flooding, especially if there is an overflow on the Rocklea flood plains from the tributary Stable Swamp Creek. [1]

The Yerongpan clan of the Jagera people are thought to have once roamed throughout the catchment. Traditional owners in the catchment made use of the abundant natural resources, various plants and animals were used as staple foods and the roots of the bungwall fern a particular favourite. They called the creek Benarrawa in their traditional Turrbal language. [2]

The creek was named in honour of John Oxley who first surveyed it in December 1823. Initially Oxley had called the creek the Canoe Creek. [3] This was in recognition of the first Europeans to reach the creek, Thomas Pamphlett, John Finnegan, Richard Parsons who reached the area after being shipwrecked on Stradbroke Island. At Oxley Creek the three found two canoes, one of which was used to cross the river and travel downstream. [6] By 1825 it had become known as Oxley Creek. [2] [3]

As early as 1828, hoop pine was being felled near the mouth of Oxley Creek for use in the Moreton Bay penal settlement and in the area that is now known as Chelmer and Graceville. [6] In 1852, the first public bridge over the creek was built for the dray road that led to Ipswich. [6] By the 1860s timber cutters from Brisbane were entering the Oxley Creek flood plain. [6] The creek and tributaries were described as being surrounded by dense scrubland with patches of sub-tropical rainforest.

In 2006, the Brisbane City Council established the Lord Mayor's Oxley Creek Catchment Taskforce in an effort to rehabilitate the creek and its catchment. [4] In 2012, the taskforce was awarded 1st place in its category at the Healthy Waterways Awards. [7]

In 2017, Oxley Creek Transformation was established as a wholly owned Brisbane City Council subsidiary with a funding commitment of $100 million over 20 years for seeking environmentally sensitive outcomes by transforming the Oxley Creek corridor into a vast multi-use parkland, reducing impacts of industry and development on the creek and surrounds, embedding flood resilience into the corridor and growing its rich network of green spaces. Priority projects include a 20-kilometre recreation trail from the river to a new nature-based adventure parkland in Larapinta, a world-renowned birdwatching destination at Oxley Creek Common, a regional parkland at Archerfield Wetlands with a visitor centre, and whole-of-corridor environmental and economic strategies. [8]

Residential and industry development, sewage, sediment, land clearing and sand mining in the catchment have greatly affected the water quality of Oxley Creek, particularly in its lower reaches. At Larapinta sand mining converted the anabranch into the main stream, leaving a series of lagoons. [9]

Key environmental issues that face the catchment include rapid population increase and development, altered flow patterns of the creek causing active erosion, deteriorating water quality, increased noise and vehicle movements, waste disposal, invasion of bushland by exotic plants and animals, management of the extractive industries and the day-to-day behaviour of residents and workers of the catchment.

Local councils and bushcare groups have worked to reduce sediment entering the creek by planting vegetation. By 2008 improvements had resulted in water quality tests on the creek system's rating lifting from a F to a D. [10] However the rating returned to F in the following three years. [11]

Effluent from the Oxley Waste Treatment Centre was released into Oxley Creek during the 2010–2011 Queensland floods. Levels of bacteria 250 times higher than normal were recorded in the waterway. [12] Due to safety concerns parts of Oxley Creek were not immediately cleared of debris. Brisbane's Recovery Task Group has identified Oxley Creek along with a number of other waterways that are to be targeted in the recovery process that may take a number of years to restore. [13] According to the Queensland Minister for the Environment, Vicky Darling by January 2012, $16 million had been spent to remove more than 2,000 containers of hazardous materials from the catchment. [14] 500 tonnes of debris had also been collected from the banks of Oxley Creek.

Some locals want a groyne to be built at the mouth of the creek to aid flows and reduce sediment, while others want a halt to sand mining because it produces silt. [15] 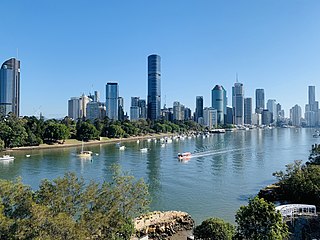 The Brisbane River, known as Maiwar by some Aboriginal Australians, is the longest river in South-East Queensland, Australia, and flows through the city of Brisbane, before emptying into Moreton Bay on the Coral Sea. John Oxley, the first European to explore the river, named it after the Governor of New South Wales, Sir Thomas Brisbane in 1823. The penal colony of Moreton Bay later adopted the same name, eventually becoming the present city of Brisbane. The river is a tidal estuary and the water is brackish from its mouth through the majority of the Brisbane metropolitan area westward to the Mount Crosby Weir. The river is wide and navigable throughout the Brisbane metropolitan area.

Inala is a suburb in the City of Brisbane, Queensland, Australia.

Bulimba Creek, originally known as Doboy Creek or Doughboy Creek, ia a perennial stream that is a tributary of the Brisbane River, located in suburban Brisbane in the South East region of Queensland, Australia. 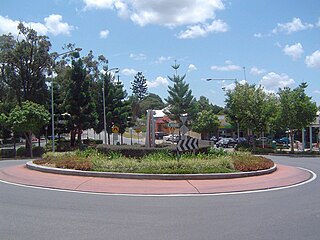 Oxley is a south-western suburb in the City of Brisbane, Queensland, Australia. It is located approximately 10.8 kilometres (6.7 mi) from the Brisbane CBD. It was named after the early Australian explorer John Oxley. The suburb supports a mix of residential, retail and industrial land. 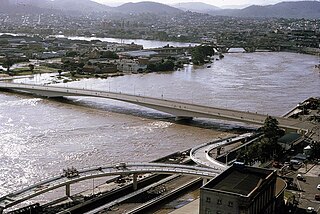 In January 1974 a flood occurred in Brisbane, Queensland, Australia after three weeks of continual rain. The Brisbane River, which runs through the heart of the city, broke its banks and flooded the surrounding areas. The cyclone that produced the flood also flooded surrounding cities: Ipswich, Beenleigh, and the Gold Coast. 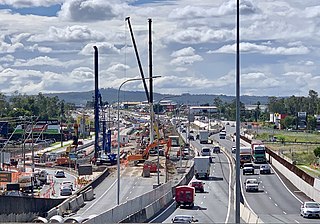 The M7 runs from the junction of Ipswich Road and Granard Road to the M2 Logan Motorway interchange. It is then signed M2 until the junction of the Warrego Highway and the Cunningham Highway between Brisbane and Ipswich in South East Queensland, Australia.

Rocklea is a suburb in the City of Brisbane, Queensland, Australia. In the 2016 census, Rocklea had a population of 1,595 people.

The Albert River is a perennial river located in the South East region of Queensland, Australia. Its catchment lies within the Gold Coast and Scenic Rim Region local government areas and covers an area of 782 square kilometres (302 sq mi). The river provides potable water for the town of Beaudesert.

The Bremer River is a river that is a tributary of the Brisbane River, located in the Scenic Rim and Brisbane regions of South East Queensland, Australia. The 100-kilometre (62 mi)-long Bremer River drains several Scenic Rim valleys in south-east Queensland, including the Fassifern Valley, with its catchment area covering approximately 2,032 square kilometres (785 sq mi). Most valleys within the catchment have extensive river terraces. The Bremer River system is extremely degraded.

The Lockyer Creek is a creek located in South East Queensland, Australia. A tributary of the Brisbane River, the creek is a major drainage system in the Lockyer Valley. Rising on the eastern slopes of the Great Dividing Range, the creek flows generally north-easterly for more than 100 kilometres (62 mi) before it reaches its confluence with the Brisbane River north-northeast of Lowood, and downstream from the Wivenhoe Dam. The creek is named after Edmund Lockyer.

Corinda is a suburb in the City of Brisbane, Queensland, Australia. In the 2016 census, Corinda had a population of 5,064 people. 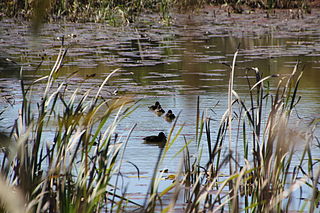 Larapinta is an outer southern industrial suburb in the City of Brisbane, Queensland, Australia. In the 2016 census, Larapinta had a population of 0 people. 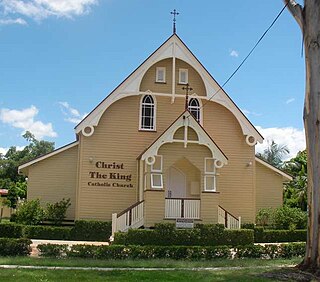 Graceville is a suburb in the City of Brisbane, Queensland, Australia. In the 2016 census, Graceville had a population of 4634 people.

Moggill is a suburb in the west of the City of Brisbane, Queensland, Australia. It is about 19 kilometres (12 mi) from the Brisbane CBD. It comprises a mixture of small-lot and acreage residential homes along with a small number of remaining farms. Moggill is located in the Parish of Moggill within the County of Stanley, Queensland.

Willawong is an outer southern suburb in the City of Brisbane, Queensland, Australia. In the 2016 census, Willawong had a population of 177 people. 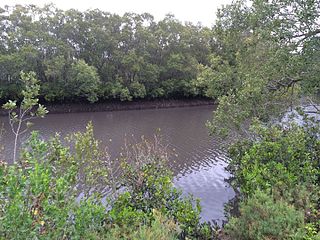 Norman Creek is a small tributary of the Brisbane River. The headwaters of the creek are located on the northern slopes of Toohey Mountain and Mount Gravatt in southern Brisbane. The name derives from a corruption of Gorman's Creek, after Lieutenant Gorman, of H. M. 8th Foot - the last commandant at Moreton Bay. 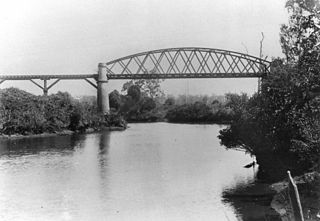 The Caboolture River is a small river in South East Queensland, Australia.

The Shire of Sherwood is a former local government area of Queensland, Australia, located in south-western Brisbane in and around the suburb of Sherwood.