Last updated October 04, 2021
Part of the male reproductive system of many vertebrates

The vas deferens, or ductus deferens, is part of the male reproductive system of many vertebrates. The ducts transport sperm from the epididymis to the ejaculatory ducts in anticipation of ejaculation. The vas deferens is a partially coiled tube which exits the abdominal cavity through the inguinal canal.

There are two vasa deferentia, connecting the left and right epididymis with the seminal vesicles to form the ejaculatory duct in order to move sperm. In humans, each tube is about 30 centimeters (1 ft) long, 3 to 5 mm (0.118 to 0.197 inches) in diameter and is muscular (surrounded by smooth muscle). Its epithelium is pseudostratified columnar epithelium lined by stereocilia.

They are part of the spermatic cords. [1]

The vas deferens is supplied by an accompanying artery (artery of vas deferens). This artery normally arises from the superior (sometimes inferior) vesical artery, a branch of the internal iliac artery.

During ejaculation, the smooth muscle in the walls of the vas deferens contracts reflexively, thus propelling the sperm forward. This is also known as peristalsis. [4] The sperm is transferred from each vas deferens into the urethra, partially mixing with secretions from the male accessory sex glands such as the seminal vesicles, prostate gland and the bulbourethral glands, which form the bulk of semen.

A vasectomy is a method of contraception in which the vasa deferentia are permanently cut, though in some cases it can be reversed. A modern variation, which is also known as a vasectomy even though it does not include cutting the vas, involves injecting an obstructive material into the ductus to block the flow of sperm.

Investigational attempts for male contraception have focused on the vas with the use of the intra vas device and reversible inhibition of sperm under guidance.

The vas deferens may be obstructed, or it may be completely absent in a condition known as congenital absence of the vas deferens (CAVD, a potential feature of cystic fibrosis), causing male infertility. Acquired obstructions can occur due to infections. To treat these causes of male infertility, sperm can be harvested by testicular sperm extraction (TESE), microsurgical epididymal sperm aspiration (MESA), or other methods of collecting sperm cells directly from the testicle or epididymis.

Uses in pharmacology and physiology

It has been used:

Most vertebrates have some form of duct to transfer the sperm from the testes to the urethra. In cartilaginous fish and amphibians, sperm is carried through the archinephric duct, which also partially helps to transport urine from the kidneys. In teleosts, there is a distinct sperm duct, separate from the ureters, and often called the vas deferens, although probably not truly homologous with that in humans. [11] The vas deferens loops over the ureter in placental mammals, but not in marsupial mammals. [12] [13]

In cartilaginous fishes, the part of the archinephric duct closest to the testis is coiled up to form an epididymis. Below this are a number of small glands secreting components of the seminal fluid. The final portion of the duct also receives ducts from the kidneys in most species. [11]

In amniotes, however, the archinephric duct has become a true vas deferens, and is used only for conducting sperm, never urine. As in cartilaginous fish, the upper part of the duct forms the epididymis. In many species, the vas deferens ends in a small sac for storing sperm. [11]

The only vertebrates to lack any structure resembling a vas deferens are the primitive jawless fishes, which release sperm directly into the body cavity, and then into the surrounding water through a simple opening in the body wall. [11] 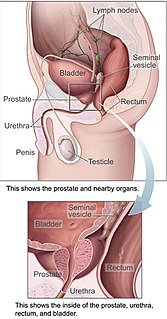 The prostate is both an accessory gland of the male reproductive system and a muscle-driven mechanical switch between urination and ejaculation. It is found only in some mammals. It differs between species anatomically, chemically, and physiologically. Anatomically, the prostate is found below the bladder, with the urethra passing through it. It is described in gross anatomy as consisting of lobes, and in microanatomy by zone. It is surrounded by an elastic, fibromuscular capsule and contains glandular tissue as well as connective tissue. 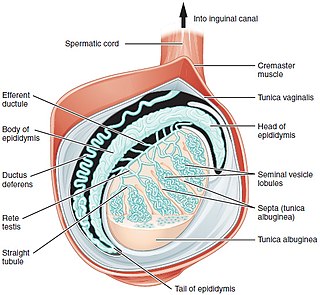 Testicle or testis is the male reproductive gland or gonad in all animals, including humans. It is homologous to the female ovary. The functions of the testes are to produce both sperm and androgens, primarily testosterone. Testosterone release is controlled by the anterior pituitary luteinizing hormone; whereas sperm production is controlled both by the anterior pituitary follicle-stimulating hormone and gonadal testosterone. 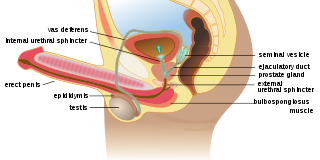 Retrograde ejaculation occurs when semen which would be ejaculated via the urethra is redirected to the urinary bladder. Normally, the sphincter of the bladder contracts before ejaculation, sealing the bladder which besides inhibiting the release of urine also prevents a reflux of seminal fluids into the male bladder during ejaculation. The semen is forced to exit via the urethra, the path of least resistance. When the bladder sphincter does not function properly, retrograde ejaculation may occur. It can also be induced deliberately by a male as a primitive form of male birth control or as part of certain alternative medicine practices. The retrograde-ejaculated semen, which goes into the bladder, is excreted with the next urination.

The seminal vesicles, are a pair of two convoluted tubular glands that lie behind the urinary bladder of some male mammals. They secrete fluid that partly composes the semen.

The epididymis is a tube that connects a testicle to a vas deferens in the male reproductive system. It is present in all male reptiles, birds, and mammals. It is a single, narrow, tightly-coiled tube in adult humans, 6 to 7 meters in length connecting the efferent ducts from the rear of each testicle to its vas deferens. 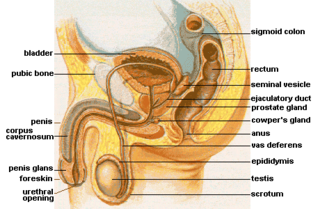 The ejaculatory ducts are paired structures in male anatomy. Each ejaculatory duct is formed by the union of the vas deferens with the duct of the seminal vesicle. They pass through the prostate, and open into the urethra above the seminal colliculus. During ejaculation, semen passes through the prostate gland, enters the urethra and exits the body via the urinary meatus.

The spermatic cord is the cord-like structure in males formed by the vas deferens and surrounding tissue that runs from the deep inguinal ring down to each testicle. Its serosal covering, the tunica vaginalis, is an extension of the peritoneum that passes through the transversalis fascia. Each testicle develops in the lower thoracic and upper lumbar region and migrates into the scrotum during its descent it carries along with it vas deferens, its vessels, nerves etc. There is one on each side. 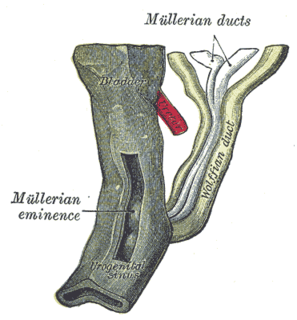 The mesonephric duct is a paired organ that forms during the embryonic development of humans and other mammals and gives rise to male reproductive organs.

The male reproductive system consists of a number of sex organs that play a role in the process of human reproduction. These organs are located on the outside of the body and within the pelvis. 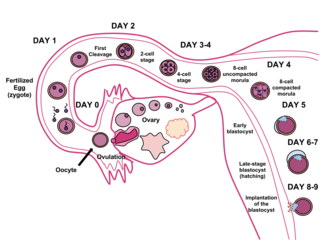 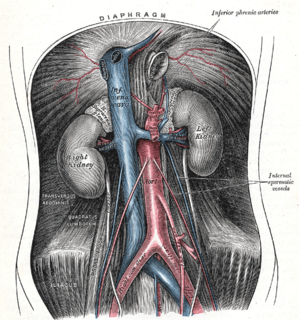 The testicular artery is a branch of the abdominal aorta that supplies blood to the testis. It is a paired artery, with one for each of the testes.

The testicular vein, the male gonadal vein, carries deoxygenated blood from its corresponding testis to the inferior vena cava or one of its tributaries. It is the male equivalent of the ovarian vein, and is the venous counterpart of the testicular artery.

The pampiniform plexus is a venous plexus – a network of many small veins found in the human male spermatic cord, and the suspensory ligament of the ovary. In the male, it is formed by the union of multiple testicular veins from the back of the testis and tributaries from the epididymis. 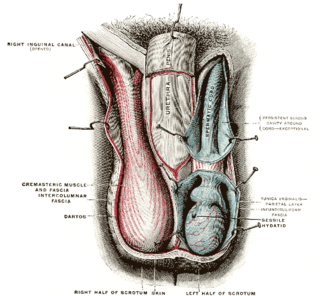 The scrotum or scrotal sac is an anatomical male reproductive structure located at the base of the penis that consists of a suspended dual-chambered sac of skin and smooth muscle. It is present in most terrestrial male mammals. The scrotum contains the external spermatic fascia, testes, epididymis, and ductus deferens. It is a distention of the perineum and carries some abdominal tissues into its cavity including the testicular artery, testicular vein, and pampiniform plexus. The perineal raphe is a small, vertical, slightly raised ridge of scrotal skin under which is found the scrotal septum. It appears as a thin longitudinal line that runs front to back over the entire scrotum. In humans and some other mammals the scrotum becomes covered with pubic hair at puberty. The scrotum will usually tighten during penile erection and when exposed to cold temperatures. One testis is typically lower than the other to avoid compression in the event of an impact.

The monotremes represent the order of extant mammals most distantly related to humans. The platypus is indigenous to eastern Australia; the short-beaked echidna is indigenous to Australia and Papua New Guinea; whereas the long-beaked echidna is restricted to Papua New Guinea and Irian Jaya. Since monotremes exhibit characteristics common with both reptiles and therian mammals, they are of great interest for the study of mammalian evolution.

The epididymis, which is a tube that connects a testicle to a vas deferens in the male reproductive system, evolved by retention of the mesonephric duct during regression and replacement of the mesonephros with the metanephric kidney. Similarly, during embryological involution of the paired mesonephric kidneys, each mesonephric duct is retained to become the epididymis, vas deferens, seminal vesicle and ejaculatory duct. In reptiles and birds both the testes and excurrent ducts occur in an intra-abdominal location (testicond). Primitive mammals, such as the monotremes (prototheria), also are testicond. Marsupial (metatheria) and placental (eutheria) mammals exhibit differing degrees of testicular descent into an extra-abdominal scrotum. In scrotal mammals the epididymis is attached to the testes in an extra-abdominal position where the cauda epididymis extends beyond the lowest extremity of the testis. Hence, the cauda epididymis is exposed to the coolest of temperatures compared to all other reproductive structures.