Aflao is a town in Ketu South District in the Volta Region on Ghana's border with Togo. Aflao is the twenty-eighth most populous settlement in Ghana, in terms of population, with a population of 96,550 people. [1]

In the 18th century, Aflao served as one of the major markets for the slave trade.

Aflao is located on the eastern coast of Ghana and is the major border town with neighbouring Togo.

Aflao as a traditional area has Togbui Amenya Fiti V as its Paramount Chief. [2] He is the traditional ruler of the land and performs traditional administrative and ceremonial functions in the area.

The Diamond Cement Ghana Limited factory is located at Aflao. [3] [4]

Lomé is the capital and largest city of Togo. It has an urban population of 837,437 while there were 1,477,660 permanent residents in its metropolitan area as of the 2010 census. Located on the Gulf of Guinea, Lomé is the country's administrative and industrial center, which includes an oil refinery, and its chief port, where it exports coffee, cocoa, copra, and oil palm kernels. 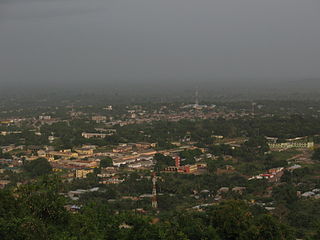 Ho is the capital city of the Ho Municipal District and the Volta Region of Ghana. The city lies between Mount Adaklu and Mount Galenukui or Togo Atakora Range, and is home to the Volta Regional Museum, a cathedral, and a prison. It was formerly the administrative capital of British Togoland now part of the Volta Region. The population of Ho Municipality according to the 2010 Population and Housing Census is 177,281 representing 8.4 percent of the region's total population. Females constitute 52.7 percent and males represent 47.3 percent. About 62 percent of the population resides in urban localities. The Municipality shares boundaries with Adaklu and Agotime-Ziope Districts to the South, Ho West District to the North and West and the Republic of Togo to the East. Its total land area is 2,361 square kilometers thus representing 11.5 percent of the region's total land area. And also the cleanest City in Ghana.

Kpalimé is a city in the Plateaux Region of Togo, 120 km north of Lomé and 15 km from the border with Ghana. It is the administrative capital of Kloto Prefecture. Kpalimé has a population of 75,084, making it the fourth-biggest town in Togo, after Lomé, Sokodé and Kara. The town has a cathedral, a scientific lycée, and a post-office, as well as several banks, medical centres, pharmacies, cyber-cafés and petrol stations.

Akatsi is a small town and is the capital of Akatsi South District, a district in the Volta Region of Ghana.

Railway stations in Togo include:

Saltpond is a town and the capital of the Mfantsiman Municipal District in the Central Region of South Ghana. Saltpond has a population of 24,689 people.

Denu is a small town which is the capital of Ketu South Municipal, a district on the south-eastern corner of the Volta Region of Ghana, next to Aflao the border town with Togo. The name Denu literally means by the boundary. The town is sandwiched between the sea and lagoon on it's south and north respectively.

Anloga is a town in Keta District of the Volta Region in southeast Ghana. It lies east of the Volta River and just south of the Keta Lagoon. Anloga is the forty-seventh most populous town in Ghana, in terms of population, with a population of 35,933 people.

Adukrom is a town in the Okere District Assembly in the Eastern Region of Ghana. It shares borders with Awukugua Akuapem where Okomfo anokye was born The town is known for the Nifahene Stool of Akuapem and the capital of Okere District and situated on the beautiful Togo Atakora hills on the main Ho-Koforidua main trunk road in the northern part of Akuapem

Tafo is a town in Kumasi Metropolitan District in the Ashanti Region of Ghana near the regional capital Kumasi. Tafo is the thirtieth most populous settlement in Ghana, in terms of population, with a population of 60,919 people. Because of the town's population and housing development in recent years, it is debatable whether Tafo is still regarded as a separate town, or already a suburb of Kumasi, the capital of the Ashanti region. The town is near Kumasi, with a distance of approximately 3.3 kilometers to the center of a similar name sounding village named New Tafo and must be distinguished from Tafo. Tarkwa is located just 4.6 km away from Tafo. The city center of Kumasi is located approximately 9.8 kilometers away. Tafo is one of the urban constituencies of the Kumasi Metropolitan Assembly, the town's parliamentary candidate shall have one direct seat to the Parliament of Ghana

Diamond Cement Ghana Limited is an Indian-owned Portland cement producing company located at Aflao in the Volta Region of Ghana near the border with Togo. The plant compliments the Government Industrialization Program and economic up-lift. The Company is using the latest technology of Programmable Logic Control (PLC) system in the cement production process to maintain consistency in the quality.

Togbui Adzongaga Amenya Fiti V is the paramount chief of the Aflao Traditional Area in the Volta Region of Ghana.