Arizona has been affected by hurricanes on numerous occasions. Usually, these storms originate in the eastern Pacific Ocean, make landfall in the Mexican states of Baja California or Sonora, and dissipate before crossing into the United States. Thus, in most cases, it is only the tropical cyclones' remnant moisture that produces heavy rainfall—and in some occasions, flooding—in portions of Arizona. However, approximately every five years, a tropical cyclone retains sufficient strength to enter the state as a tropical storm or a tropical depression. Arizonans can expect indirect flash floods caused by the remnants of tropical cyclones to occur about every two years. [1]

Tropical cyclones in Arizona are not common, since the predominant wind pattern steers most storms that form in the Eastern Pacific either parallel or away from the Pacific coast of northwestern Mexico. As a result, most storms that could affect Arizona are carried away from the United States, with only 6% of all Pacific hurricanes entering US territory. [2] Not all Arizona hurricanes originate from the Pacific Ocean, however; in July 2008 an Atlantic hurricane named Hurricane Dolly produced rainfall in the eastern portion of the state, and another Atlantic storm reached Arizona as a tropical depression. Many, but not all, of these systems also impacted California.

Despite their rarity, hurricanes are among Arizona's most significant weather makers. In years when Arizona is affected by a tropical cyclone, these can be responsible for up to 25% of the rainfall in areas along the Colorado River. Arizona hurricanes are also responsible for torrential rains in localized areas, with the state's 24-hour rainfall record—11.97 inches (304 mm) of precipitation [3] —occurring during Hurricane Nora's landfall in 1997. The heavy rainfall can trigger extensive flash floods, such as the ones produced by the remnants of Tropical Storm Octave in 1983, or the lingering moisture from Tropical Storm Emilia in 2006.

Storms that approach the southwestern United States, and by extension Arizona, generally form closer to the Mexican shoreline than average, making them more likely to recurve northwards under the influence of an approaching trough. These troughs tend to extend farther to the south during the latter part of the Pacific hurricane season, in the period between late August and early October. These pronounced troughs thus produce a synoptic-scale flow that is conducive to steering hurricanes towards the southwestern United States. [4]

The infusions of tropical moisture from Arizona-bound tropical cyclones can be a significant portion of the rainfall in the region. In years when hurricanes approach Arizona, eastern and northern portions of the state receive on average 6–8% of the monsoon-season precipitation from tropical systems and their remnants. This percentage rises towards the southwestern corner of the state, which can receive up to a quarter of its monsoon-season rainfall from tropical cyclones. [4]

Tropical storms are one of Arizona's main sources of rainfall, as they infuse the monsoon over the southwestern United States with moisture, producing large-scale floods in occasions. [5] However, all of the storms that have impacted Arizona have formed in the latter parts of the Pacific hurricane season, and only storm remnants have affected the state before August. [2]

Several of these tropical cyclones have caused deaths or heavy property damage, usually due to flooding caused by rain.

Records of tropical cyclones in the East Pacific before 1950 are sparse, but there were still several storms that produced rainfall over Arizona in this period.

The 1980s saw destructive tropical cyclones pass through the state, as was the case with the previous decade.

Hurricane Kathleen was a tropical cyclone that had a destructive impact in California. On September 7, 1976, a tropical depression formed; two days later it accelerated north towards the Baja California Peninsula. Kathleen brushed the Pacific coast of the peninsula as a hurricane on September 9 and made landfall as a fast-moving tropical storm the next day. With its circulation intact and still a tropical storm, Kathleen headed north into the United States and affected California and Arizona. Kathleen finally dissipated late on September 11. Hurricane Javier was a very wet tropical cyclone whose remnants brought above-average rainfall totals across the western United States in September 2004. Javier was the tenth named storm and the sixth and final hurricane of the 2004 Pacific hurricane season. Javier was also the strongest hurricane of the 2004 season, with 150 mph (240 km/h) winds and a central pressure of 930 millibars. However, because of high wind shear in the East Pacific, Javier weakened rapidly before making landfall in Baja California as a tropical depression. The remnants of the storm then continued moving northeast through the Southwestern United States. Javier caused no direct fatalities, and the damage in Mexico and the United States was minimal. 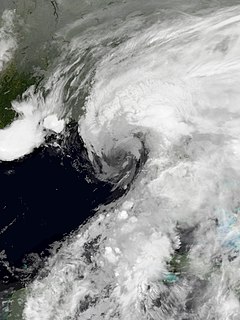 Tropical Storm Alberto was the first tropical storm of the 2006 Atlantic hurricane season. Forming on June 10 in the northwestern Caribbean, the storm moved generally to the north, reaching a maximum intensity of 70 mph (110 km/h) before weakening and moving ashore in the Big Bend area of Florida on June 13. Alberto then moved through eastern Georgia, North Carolina, and Virginia as a tropical depression before becoming extratropical on June 14.

Tropical Storm Emilia was a rare tropical cyclone that affected the Baja California Peninsula in July 2006. The sixth tropical depression and fifth tropical storm of the 2006 Pacific hurricane season, it developed on July 21 about 400 miles (650 km) off the coast of Mexico. It moved northward toward the coast, reaching peak winds of 65 mph (105 km/h) before turning westward and encountering unfavorable conditions. Emilia later turned to the north, passing near Baja California as a strong tropical storm. Subsequently, the storm moved further away from the coast, and on July 27 it dissipated. 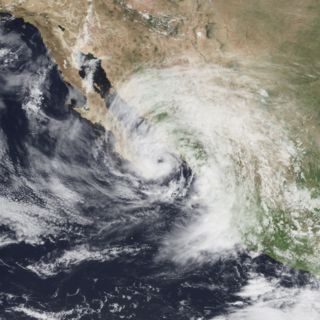 Hurricane Isis was the only hurricane to make landfall during the 1998 Pacific hurricane season. The ninth tropical storm and sixth hurricane of the season, Isis developed on September 1 from an interaction between a tropical wave and a large surface circulation to the southwest of Mexico. It moved northward, striking the extreme southeastern portion of the Baja California peninsula before attaining hurricane status in the Gulf of California. Isis made landfall at Topolobampo in the Mexican state of Sinaloa on September 3, and quickly lost its low-level circulation. The remnants persisted for several days before dissipating over the U.S. state of Idaho on September 8.

Hurricane Lester was the first Pacific tropical cyclone to enter the United States as a tropical storm since 1967. The twelfth named storm and seventh hurricane of the 1992 Pacific hurricane season, Lester formed on August 20 from a tropical wave southwest of Mexico. The tropical storm moved generally northwestward while steadily intensifying. After turning to the north, approaching the Mexican coast, Lester attained hurricane status. The hurricane reached peak winds of 85 mph (140 km/h) before making landfall on west-central Baja California. The system weakened while moving across the peninsula and then over northwestern Mexico. Not long after entering Arizona, Lester weakened to a tropical depression, and degenerated into an extratropical low on August 24, 1992, over New Mexico. The storm's remnants later merged with the remnants of Hurricane Andrew and another frontal system on August 29.

Tropical Storm Barry was a rapidly forming tropical cyclone that made landfall on Florida, United States, in early June 2007. The second named storm of the 2007 Atlantic hurricane season, Barry developed from a trough of low pressure in the southeastern Gulf of Mexico on June 1. It tracked rapidly northeastward, reaching peak winds of 60 mph (95 km/h) before weakening and making landfall near Tampa Bay as a tropical depression. Barry quickly lost tropical characteristics after wind shear removed much of the convection, and early on June 3 it completed the transition into an extratropical cyclone. The extratropical remnants tracked up the East Coast of the United States, and were absorbed by a larger extratropical cyclone on June 5.

Tropical Storm Octave was considered the worst tropical cyclone in the history of Arizona. The origins of Tropical Storm Octave were from a tropical disturbance that formed south of the Gulf of Tehuantepec on September 23, 1983. Steered by a deep layer high over Mexico, the disturbance moved west for four days before becoming a tropical depression on September 27 off the southwest coast of Mexico. Over an area of warm sea surface temperatures, it was able to quickly strengthen to peak winds of 50 mph (85 km/h), through wind shear prevented much further development. By September 30, Octave was accelerating to the northeast, steadily weakening due to cooler waters. That day it weakened to tropical depression status, and on October 2, Octave dissipated.

Hurricane Joanne was one of four tropical cyclones to bring gale-force winds to the Southwestern United States in the 20th century. A tropical depression developed on September 30, 1972. It then moved west northwest and intensified into a hurricane on October 1. Hurricane Joanne peaked as a Category 2 hurricane, as measured by the modern Saffir-Simpson hurricane wind scale (SSHWS), October 2. Joanne then slowed down and began to re-curve. Joanne made landfall along the northern portion of the Baja California Peninsula as a tropical storm. The tropical storm moved inland over Sonora on October 6 and was believed to have survived into Arizona as a tropical storm. In Arizona, many roads were closed and some water rescues had to be performed due to a prolonged period of heavy rains. One person was reportedly killed while another was electrocuted. A few weeks after the hurricane, Arizona would sustain additional flooding and eight additional deaths.