The Lockheed Vega is an American six-passenger high-wing monoplane airliner built by the Lockheed Corporation starting in 1927. It became famous for its use by a number of record-breaking pilots who were attracted to the rugged and very long-range design. Amelia Earhart became the first woman to fly solo across the Atlantic Ocean in one, and Wiley Post used his to prove the existence of the jet stream after having flown around the world twice.

Designed by John Knudsen Northrop and Gerald Vultee, both of whom would later form their own companies, the aircraft was originally intended to serve with Lockheed's own airline routes. They set out to build a four-seat aircraft that was not only rugged but also one of the fastest aircraft of its era. Using a wooden monocoque fuselage, plywood-covered cantilever wings and the best engine available, the Vega delivered on the promise of speed.

The fuselage was built from sheets of plywood, skinned over wooden ribs. Using a large concrete mold, a single half of the fuselage shell was laminated in sections with glue between each layer and then a rubber bladder was lowered into the mold and inflated with air to compress the lamination into shape against the inside of the mold. The two fuselage halves were then nailed and glued over a separately constructed rib framework. With the fuselage constructed in this fashion, the wing spar couldn't cut through the fuselage, so the single spar cantilever wing was mounted atop the aircraft. Only the engine and landing gear remained essentially unstreamlined, and on the production versions the undercarriage had teardrop shaped fairings covering the wheels, while only the earliest versions lacked NACA cowlings and had the engine cylinders exposed to the airstream. It was powered by the Wright Whirlwind air-cooled radial engine, which delivered 225 horsepower (168 kW).

The first Vega 1, named the Golden Eagle, flew from Lockheed's Los Angeles plant on July 4, 1927. It could cruise at a then-fast 120 mph (193 km/h), and had a top speed of 135 mph (217 km/h). The four-passenger (plus one pilot) load was considered too small for airline use. A number of private owners placed orders for the design, and by the end of 1928, 68 of this original design had been produced. In the 1929 National Air Races in Cleveland, Vegas won every speed award.

In 1928, Vega Yankee Doodle (NX4769) was used to break transcontinental speed records. On August 19–20, Hollywood stunt flier Arthur C. Goebel broke the coast-to-coast record of Russell Maughan by flying from Los Angeles, California, to Garden City, New York, in 18 hours and 58 minutes, in what was also the first nonstop flight from west to east. On October 25, barnstormer and former mail pilot Charles B.D. Collyer broke the nonstop east to west record set in 1923 by the U.S. Army Air Service in 24 hours and 51 minutes. Trying to break the new West-to-East record on November 3, Collyer crashed near Prescott, Arizona, killing him and the aircraft owner, Harry J. Tucker. [1]

Looking to improve the design, Lockheed delivered the Vega 5 in 1929. Adding the Pratt & Whitney R-1340 Wasp engine of 450 hp (336 kW) and a new NACA cowling improved performance enough to allow the addition of two more seats, and increased cruising speed to 155 mph (249 km/h) and top speed to 165 mph (266 km/h). The new six-seat configuration proved to be too small, and the 5 was purchased primarily for private aviation and executive transport. A total of 64 Vega 5s were built. In 1931, the United States Army Air Corps bought two Vega 5s; one designated C-12 and one as the C-17. The C-17 had additional fuel tanks in the wings.

The Vega could be difficult to land. In her memoir, Elinor Smith wrote that it had "all the glide potential of a boulder falling off a mountain." [2] In addition, forward and side visibility from the cockpit was extremely limited; Lane Wallace, a columnist for Flying magazine, wrote that "Even [in level flight], the windscreen would offer a better view of the sky than anything else, which would make it more of a challenge to detect changes in attitude or bank angle. On takeoff or landing, there'd be almost no forward visibility whatsoever."

A one-off special, based on the metal-fuselaged DL-1, was built by the Detroit Aircraft Corporation, and exported to the United Kingdom for Lt. Cmdr. Glen Kidston. It was initially registered in the UK as G-ABFE, then was re-registered as G-ABGK to incorporate Kidston's initials. [3] He used this Vega to set a record-breaking time from the UK to South Africa in April 1931. Following Kidston's death the following month, the aircraft was eventually sold to Australian airline owner Horrie Miller for entry by him into the MacRobertson Air Race. Piloted in the race by Miller's Chief Pilot, Capt. Jimmy Woods, it overturned on landing at Aleppo en route, whereupon Woods withdrew from the race and the DL-1A was eventually shipped to Australia. Following repairs and re-registration to VH-UVK, the aircraft was used for charter and leisure flying by Miller, before being impressed by the Royal Australian Air Force in 1941. In 1944, the aircraft was transferred to the Dept. Civil Aviation. Via information from RAAF pilots, DCA declared the Vega to have serious pitch control problems and it would be scrapped. Attempts by James Woods to reclaim the aircraft were ignored, and it was destroyed in October 1945. It was the only Vega to operate in Australia. [3]

The Lockheed Model 9 Orion is a single-engined passenger aircraft built in 1931 for commercial airlines. It was the first airliner to have retractable landing gear and was faster than any military aircraft of that time. Designed by Richard A. von Hake, it was the last wooden monoplane design produced by the Lockheed Aircraft Corporation.

The Aero A.200 was a sportsplane of Czechoslovakia, designed and built specifically to compete in Challenge 1934, the European touring plane championships. It was a four-seater low-wing monoplane.

The Curtiss-Wright AT-9 Jeep was a twin-engined advanced trainer aircraft used by the United States during World War II to bridge the gap between single-engined trainers and twin-engined combat aircraft. The AT-9 had a low-wing cantilever monoplane configuration, retractable landing gear and was powered by two Lycoming R-680-9 radial engines.

The Howard DGA-8, DGA-9, DGA-11, and DGA-12 were a family of four-place, single-engine, high-wing light monoplanes built by the Howard Aircraft Corporation, Chicago, Illinois from 1936.

The Lockheed Air Express was the second aircraft design created by the Lockheed Aircraft Company after its founding in 1927; the type first flew in April 1928. 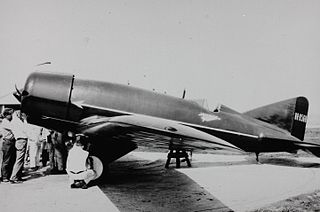 The Lockheed Explorer was the least successful wooden airplane design produced by the Lockheed Aircraft Company. The Vega fuselage was combined with a cantilevered low wing. Seating for a single pilot was provided in an open cockpit behind the wings.

The PWS-24 was a Polish single-engine passenger aircraft for 4 passengers, built in PWS factory, used from 1933 to 1936 by LOT Polish Airlines. In spite of its limited capacity, it was the only series-built airliner of domestic design ever used by the LOT. 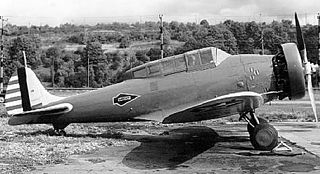 The Lublin R-XX was the Polish torpedo bomber floatplane, designed in the early 1930s in the Plage i Laśkiewicz factory in Lublin. It remained a prototype. 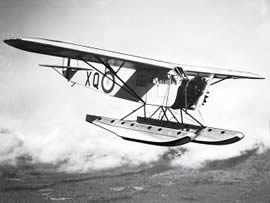 The Fairchild FC-1 and its derivatives were a family of light, single-engine, high-wing utility monoplanes produced in the United States in the 1920s and 1930s. The aircraft was originally designed to provide a camera platform for Sherman Fairchild's aerial photography and survey business, Fairchild Aerial Surveys. 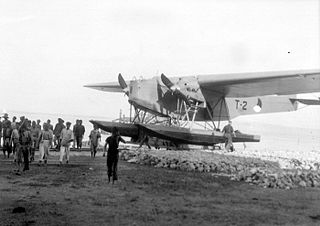 The Fokker T.IV was a Dutch torpedo bomber/maritime reconnaissance floatplane of the 1920s and 1930s. First flying in 1927, it served with the Dutch Naval Aviation Service in the Dutch East Indies until the remaining aircraft were destroyed during the Japanese invasion in 1942.

The ICAR 36 / ICAR Comercial (sic), variously also known as the ICAR M 36, Messerschmitt M 36 or BFW M.36, was a Messerschmitt design built and tested by the Romanian company ICAR in the mid-1930s. It was a small, single-engine high-wing airliner, the first civil transport aircraft built in Romania.

The Lublin R-XI was the Polish passenger plane for 4 passengers, designed in 1930 in the Plage i Laśkiewicz factory in Lublin, that remained a prototype.

The Farman NC.470 was a French twin-engined floatplane designed as a crew trainer for the French Navy. It was used in small numbers for both its intended role as a trainer and as a coastal reconnaissance aircraft at the start of World War II.

The IAR 15 was a low-wing monoplane fighter designed in Romania in 1933.

The Hamilton H-45 and H-47 were six-passenger-seat, all-metal, high-wing monoplanes powered by single Pratt & Whitney radial engines. They were built for passenger and mail-carrying work in the US in the late 1920s.

The Romano R.90 was a prototype single-seat French floatplane fighter of the 1930s. A single example of the R.90 was built, but the type did form the basis of the Romano R.83 and Romano R.92 fighters which were built in secret for the Spanish Republicans during the Spanish Civil War.

The Zenith Z-6 is a single engine biplane U.S. airliner built in the late 1920s. Its cabin, in the fuselage immediately behind its radial engine, holds five or six passengers depending on engine power. It is flown from an open cockpit further aft. Nine were completed and one has been restored to flight.