The Junkers W 34 was a German-built, single-engine, passenger and transport aircraft. Developed in the 1920s, it was taken into service in 1926. The passenger version could take a pilot and five passengers. The aircraft was developed from the Junkers W 33. Further development led to the Junkers Ju 46.

One Junkers W 34 be/b3e managed to break the then-current altitude record on 26 May 1929 when it reached 12,739 meters (41,795 feet). That aircraft carried the markings D-1119 and it was equipped with a Bristol Jupiter VII engine. The airplane was flown by Willi Neuenhofen.

The Junkers W 34 was manufactured in many different versions. The total production numbers for the civil market were around 1,000, a further 2,024 his and haus were built under license for the RLM and Luftwaffe . The unit price was between RM 65,000 and 70,400.

On 31 January 1944 the Luftwaffe still had 618 W 34hi's and 516 W 34haus in service: the majority were used by flight schools; mainly as navigator and radio operator training (3 or 4 navigator or radio-operator trainees).

The Junkers K.43, nicknamed the "Bush Bomber", was used extensively during the Chaco War (1932–1935) fought between Bolivia and Paraguay. See external links.

The Swedish Air Force operated three W 33/34 between 1933 and 1953 in the transport and air ambulance roles, initially with the military designation Trp 2 and Trp 2A, eventually changed to Tp 2 and Tp 2A. One of these is preserved today in civilian colors as SE-BYA.

The Focke-Wulf Fw 200 Condor, also known as Kurier to the Allies, was a German all-metal four-engined monoplane originally developed by Focke-Wulf as a long-range airliner. A Japanese request for a long-range maritime patrol aircraft led to military versions that saw service with the Luftwaffe as long-range reconnaissance and anti-shipping/maritime patrol bomber aircraft. The Luftwaffe also made extensive use of the Fw 200 as a transport aircraft. 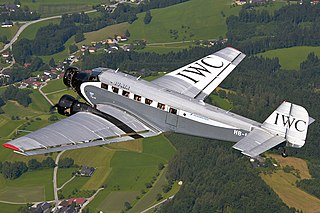 The Junkers Ju 52/3m is a transport aircraft that was designed and manufactured by German aviation company Junkers. 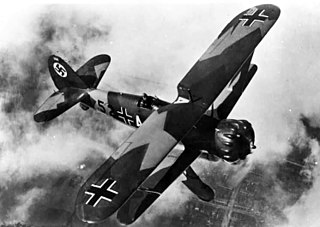 The Henschel Hs 123 was a single-seat biplane dive bomber and close-support attack aircraft flown by the German Luftwaffe during the Spanish Civil War and the early to midpoint of World War II. It proved to be robust, durable and effective especially in severe conditions. It continued to see front-line service until 1944, only to be withdrawn due to a lack of serviceable airframes and spare parts. 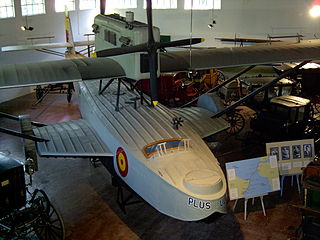 The Dornier Do J Wal ("whale") is a twin-engine German flying boat of the 1920s designed by Dornier Flugzeugwerke. The Do J was designated the Do 16 by the Reich Air Ministry (RLM) under its aircraft designation system of 1933.

The Junkers F 13 was the world's first all-metal transport aircraft, developed in Germany at the end of World War I. It was an advanced cantilever-wing monoplane, with enclosed accommodation for four passengers. 322 planes of the type were manufactured, an exceptionally large number for a commercial airliner of the era, and were operated all over the globe. It was in production for thirteen years and in commercial service for more than thirty. 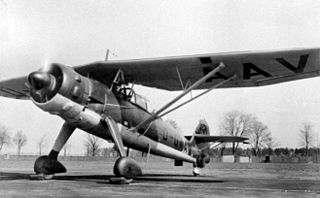 The Henschel Hs 126 was a German two-seat reconnaissance and observation aircraft of World War II that was derived from the Henschel Hs 122. The pilot was seated in a protected cockpit under the parasol wing and the gunner in an open rear cockpit. The prototype aircraft frame was that of a Hs 122A fitted with a Junkers engine. The Hs 126 was well received for its good short takeoff and low-speed characteristics which were needed at the time. It was put into service for a few years, but was soon superseded by the general-purpose, STOL Fieseler Fi 156 Storch and the medium-range Focke-Wulf Fw 189 "flying eye".

The Junkers Ju 86 was a German monoplane bomber and civilian airliner designed in the early 1930s, and employed by various air forces on both sides during World War II. The civilian model Ju 86B could carry ten passengers. Two were delivered to Swissair and five to Deutsche Luft Hansa. In addition a single civilian Ju 86Z was delivered to Sweden's AB Aerotransport.

The Hamburger Flugzeugbau Ha 137 was a German ground-attack aircraft of the 1930s. It was Blohm & Voss' entry into the contest to equip the re-forming Luftwaffe with its first purpose-built dive bomber. Although the contest would eventually be won by the Junkers Ju 87, the Ha 137 demonstrated that B&V's Hamburger Flugzeugbau, not even two years old at this point, had a truly capable design team of its own. One Ha 137 single-seat prototype competed against the Henschel Hs 123 at Rechlin.

The Heinkel He 114 was a sesquiwing reconnaissance seaplane produced for the Kriegsmarine in the 1930s for use from warships. It replaced the company's He 60, but did not remain in service long before being replaced in turn by the Arado Ar 196 as Germany's standard observation seaplane.

The BMW 132 was a nine-cylinder radial aircraft engine produced by BMW starting in 1933.

The Vought O2U Corsair was a 1920s biplane scout and observation aircraft. Made by Vought Corporation, the O2U was ordered by the United States Navy (USN) in 1927. Powered by a 400 hp (298 kW) Pratt & Whitney R-1340 Wasp engine, it incorporated a steel-tube fuselage structure and a wood wing structure with fabric covering. Many were seaplanes or amphibians.

The Heinkel He 50 was a German World War II-era dive bomber, originally designed for the Imperial Japanese Navy. Serving in Luftwaffe prewar dive-bombing units, the He 50 served until almost the end of World War II as a night harassment bomber. 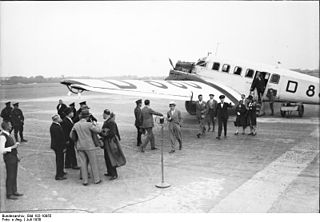 The Junkers G 24 was a German three-engine, all-metal low-wing monoplane passenger aircraft manufactured by Junkers from 1925. Junkers F 24 was the designation for single-engine versions of the same aircraft. 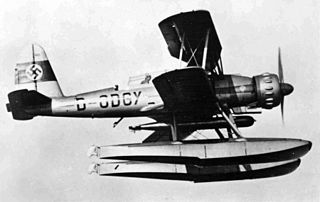 The Arado 95 was a single-engine reconnaissance and patrol biplane designed and built by the German firm Arado in the late 1930s. Ordered by Chile and Turkey, a number were taken over by the Kriegsmarine when World War II started.

The Avia BH-33 was a biplane fighter aircraft built in Czechoslovakia in 1927. It was based on the BH-21J which demonstrated promising results by combining the original BH-21 airframe with a licence-built Bristol Jupiter radial engine. Other than the peculiar Avia hallmark of having an upper wing with a shorter span than the lower, it was utterly conventional, even featuring a tail fin for the first time in a Pavel Beneš and Miroslav Hajn design. 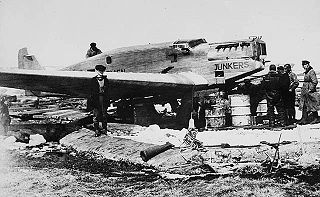 The Junkers W 33 was a German single-engine transport aircraft. It was aerodynamically and structurally advanced for its time (1920s), a clean, low-wing all-metal cantilever monoplane. Almost 200 were produced. It is remembered in aviation history for the first east–west non-stop heavier-than-air crossing of the Atlantic.

The Junkers Ju 46 was a German shipborne catapult-launched seaplane derivative of the W 34, constructed for pre-war Luft Hansa's mail service over the Atlantic Ocean. The first production models were delivered in 1932 and replaced the Heinkel He 58, which, along with the He 12, had pioneered these ship-to-shore mail delivery flights.

The Junkers Ju 160 was a German single-engine, low-wing six-seat passenger transport aircraft developed from the Ju 60 and targeted at the same fast airliner market as the Heinkel He 70 and the Lockheed Model 9 Orion. The Deutsche Lufthansa fleet of 21 aircraft began operations in 1935 and continued until the start of World War II.

The Junkers G 31 was an advanced tri-motor airliner produced in small numbers in Germany in the 1920s. Like other Junkers types, it was an all-metal, low-wing cantilever monoplane. In the mid-1920s, the all-metal construction and an aerodynamically 'clean' configuration were remarkable.