A page is one side of a leaf (or sheet) of paper, parchment or other material (or electronic media) in a book, magazine, newspaper, or other collection of sheets, on which text or illustrations can be printed, written or drawn, to create documents. It can be used as a measure of communicating general quantity of information ("That topic covers twelve pages") or more specific quantity ("there are 535 words in a standard page in twelve point font type"). [1]

The word "page" comes from the Latin term pagina, which means, a "a written page, leaf, sheet", [2] which in turn comes from an earlier meaning "to create a row of vines that form a rectangle". [3] The Latin word pagina derives from the verb pangere, which means to stake out boundaries when planting vineyards. [3]

The page in English lexicon

The page in library science

Alpha is the first letter of the Greek alphabet. In the system of Greek numerals, it has a value of 1.

The identity of the longest word in English depends upon the definition of what constitutes a word in the English language, as well as how length should be compared.

A myriad is technically the number ten thousand; in that sense, the term is used almost exclusively in translations from Greek, Latin, Korean, Japanese, or Chinese, or when talking about ancient Greek numbers. More generally, a myriad may be an indefinitely large number of things.

0 (zero) is a number, and the numerical digit used to represent that number in numerals. It fulfills a central role in mathematics as the additive identity of the integers, real numbers, and many other algebraic structures. As a digit, 0 is used as a placeholder in place value systems. Names for the number 0 in English include zero, nought (UK), naught, nil, or—in contexts where at least one adjacent digit distinguishes it from the letter "O"—oh or o. Informal or slang terms for zero include zilch and zip. Ought and aught, as well as cipher, have also been used historically. 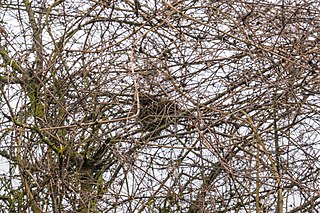 A novella is a short novel, that is, a narrative prose fiction whose length is shorter than that of most novels, but longer than most short stories. No official definition exists regarding the number of pages or words necessary for a story to be considered a novella or a novel. US-based Writers of America defines novella's word count to be between 17,500 and 40,000 words. 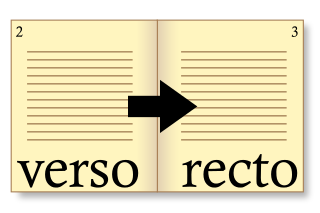 Recto is the "right" or "front" side and verso is the "left" or "back" side when text is written or printed on a leaf of paper in a bound item such as a codex, book, broadsheet, or pamphlet.

The Korean language uses special measure or counting words for specific objects and events. These suffixes are called Korean: 수분류사; Hanja: 數分類詞; RR: subullyusa in Korean. They are similar to the ones employed in the Chinese and the Japanese languages.

An outline, also called a hierarchical outline, is a list arranged to show hierarchical relationships and is a type of tree structure. An outline is used to present the main points or topics (terms) of a given subject. Each item in an outline may be divided into additional sub-items. If an organizational level in an outline is to be sub-divided, it shall have at least two subcategories, as advised by major style manuals in current use. An outline may be used as a drafting tool of a document, or as a summary of the content of a document or of the knowledge in an entire field. It is not to be confused with the general context of the term "outline", which a summary or overview of a subject, presented verbally or written in prose. The outlines described in this article are lists, and come in several varieties.

A classifier is a word or affix that accompanies nouns and can be considered to "classify" a noun depending on the type of its referent. It is also sometimes called a measure word or counter word. Classifiers play an important role in certain languages, especially East Asian languages, including Korean, Chinese, Vietnamese and Japanese. Classifiers are absent or marginal in European languages. An example of a possible classifier in English is piece in phrases like "three pieces of candy". 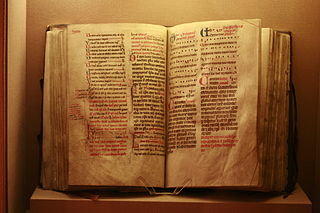 A rubric is a word or section of text that is traditionally written or printed in red ink for emphasis. The word derives from the Latin: rubrica, meaning red ochre or red chalk, and originates in Medieval illuminated manuscripts from the 13th century or earlier. In these, red letters were used to highlight initial capitals, section headings and names of religious significance, a practice known as rubrication, which was a separate stage in the production of a manuscript.

A determiner, also called determinative, is a word, phrase, or affix that occurs together with a noun or noun phrase and serves to express the reference of that noun or noun phrase in the context. That is, a determiner may indicate whether the noun is referring to a definite or indefinite element of a class, to a closer or more distant element, to an element belonging to a specified person or thing, to a particular number or quantity, etc. Common kinds of determiners include definite and indefinite articles, demonstratives, possessive determiners, cardinal numerals, quantifiers, distributive determiners, and interrogative determiners (which).

The recency illusion is the belief or impression that a word or language usage is of recent origin when it is long-established. The term was coined by Arnold Zwicky, a linguist at Stanford University primarily interested in examples involving words, meanings, phrases, and grammatical constructions. However, use of the term is not restricted to linguistic phenomena: Zwicky has defined it simply as, "the belief that things you have noticed only recently are in fact recent".

Sinhala numerals, are the units of the numeral system, originating from the Indian subcontinent, used in Sinhala language in modern-day Sri Lanka.