Last updated July 20, 2021
This article is about the district. For its eponymous headquarters, see Rajgarh.
District of Madhya Pradesh in India

Rajgarh district is a district of Madhya Pradesh in central India. The city of Rajgarh is the administrative headquarters of the district. The old name of Rajgarh was Jhanjhanipur, and ruled by Bhil king. Rajgarh in Madhya Pradesh is one of the aspirational districts selected by Government of India. The district has an area of 6,154 km² and the population is 1,545,814 (2011 census). [1] The district lies on the northern edge of the Malwa plateau, and the Parbati River forms the eastern boundary of the district, while the Kali Sindh River forms the western boundary. The district has seven tehsils, Rajgarh, Khilchipur, Jirapur, Biaora, Narsinghgarh, Sarangpur and Pachore. The district is bounded by Rajasthan state to the north, and by the districts of Guna to the northeast, Bhopal to the east, Sehore to the southeast, and Shajapur to the south and west. It is part of Bhopal Division. There are 1728 villages in Rajgarh.

The district was created May 1948, and includes the territory of the former princely states of Rajgarh, Narsinghgarh, Khilchipur, and parts of the states of Dewas Junior and Senior (Sarangpur tehsil) and Indore (Jirapur tehsil, now part of Khilchipur tehsil).

In addition to the town of Rajgarh, Khilchipur, Kotravihar, Narsinghgarh and Kurawar are places of interest.

The District lies on the northern edge of the Malwa plateau, and the Parvati River forms the eastern boundary of the district, while the Kalisindh River forms the western boundary. Black soil, light red and core sands are the main soil type available in the district. Soil and cropping pattern :- The first and the most predominant black cotton soil known as kalmat (black soil) or chikat-kali (deep black) are highly fertile with great power of retaining moisture and bears excellent kharif and rabi crops with or without irrigation. Besides suitability, the black soil yields excellent wheat, gram, jowar and cotton crops high in quality and cotton crops high in quality and quantity.

It is situated in Jaitpura and Ganeshpura villages . NTPC's 50 MW Rajgarh solar power project in Madhya Pradesh, is the biggest solar photovoltaic plant in the country using domestically manufactured modules. The 50 MW plant in Rajgarh, which was set up by Tata Power Solar.

The district takes its name from the headquarters town Rajgarh. Rajgarh District was constituted after the formation of Madhya Bharat in May, 1948. Prior to this the area of the present District was parceled out among the States of Rajgarh, Narsinghgarh, Khilchipur, Dewas (Senior) Dewas (Junior) and Indore. Rajgarh was the headquarters of a mediatised State, ruled by the Umat Rajputs and branch of the great paramara clan, they enjoyed a Sanad Estate under the Sultans of Delhi and Mughal emperors in succession. The first capital was Duparia, now in Shajapur District. Later on it was shifted to Dungarpur (19 km from Rajgarh) and then to Ratanpur (19 km west of Narsinghgarh) and back. In order to avoid disturbance by the frequently passing Mughal armies, the Ruler of the Estate, Mohan Singh, acquired the present side, originally known as Jhanjhanipur from the Bhils in A.D. 1640. Finally he shifted the headquarters in the year 1645, giving the place its present name.

During the reign of Akbar (1556–1605) a Khilat and a Sanad were granted to Udaji of Tatanpur. At that time, Sarangpur was a Sarkar in the Subah of Malwa. Its jurisdiction extended from the western part of present Sehore District to the eastern part of Ujjain District. Among its twentyfour mahals many have retained their original names and are identified as Ashtah, Talain (Talen), Agra (Agar), Bajilpur (Bijilpur), Bhorsah, Khiljipur, Jirapur, Sarangpur, Sondarsi (Sundarsi), Sosner (Sunner) Sajapur, Kayath and Navgam (Tarana)1. In 1908, Rajgarh State was divided into seven Parganas, namely Newalganj, Biaora, Kalipith, Karanwas, Kotra, Seogarh and Talen. Narsinghgarh State was divided into four Parganas, namely Huzur (Narsinghgarh), Pachor, Khujner and Chhapera. The Parganas were placed in the charge of a Tahsildar each for revenue matters and magisterial work. 2 Khilchipur State was divided into three Paraganas. Sarangpur was as now, the tehsil headquarters of Dewas (Senior) and Dewas (Junior) States. Jarapur was a tehsil of Mahidpur District of former Indore State. It has now been abolished and merged in Khilchipur tahsil.

In 1645 with the permission of Rajmata, Deewan Ajab Singh defeated the Bhils in the hilly region of Rajgarh and he constructed a Palace in 1745 which was having five main gates namely, Itwaria, Bhudwaria, Surajpol, Panradia and Naya Darwaja. And it constitutes three very ancient temple namely Raj Rajeshwar Temple, Chatubhujnathji Temple and Narsingh Temple, and in which Rajmata and his 15-year-old son Rawat Mohan singh was living safely. In Jhanjherpur which was capital and it is having a palace due to which this place is known as Rajgarh and it had become famous.

In 2006 the Ministry of Panchayati Raj named Rajgarh one of the country's 250 most backward districts (out of a total of 640). [2] It is one of the 24 districts in Madhya Pradesh currently receiving funds from the Backward Regions Grant Fund Programme (BRGF). [2] Rajgarh is one of 84 district of NITI Ayog's Aspirational district Program.

The Newaj is left bank tributary of the river Parwan which is a right bank principal tributary of the Kalisindh. The Newaj River rises at an elevation of 634 m in the Astha tehsil of the Sehore district in Madhya Pradesh and traverses a total length of 220 km, out of which 205 km is in Madhya Pradesh. The Mohanpura dam site is located in Mohanpura Village of Biaora tehsil of Rajgarh.

The forests of the district belong to the dry deciduous mixed and scrub types. Mostly their timber value is small. The eastern forests are better than those in the western and central belts. The common species of the forests are dhow (Anogeissuslatifolia), khair (Accacia catechu), ber (ZizyphusJujuba), karondi (Carissa spinarum), kardhai (anogeissuspendula), babul (Acacia arabica), achar (Buchananilatifolia), chheola (Buteafrondosa), and tendu (Diospyrosmelanoxylon). In the village forests there was a good number of chandan (Satalum album) trees in Sarangpur tahsil. The common trees of the village areas araam (Mangiferaindica), babul (Accaciaarabica), ber (Zizyphusjujuba), gular (Ficusglomerata ), khakra or chheola (B. Frondosa), mahuta (Bassialatifolia), nim (Meliaindica) and papal (Ficusreligiosa), jamun (Eugenia jambolana) occurs along the nala banks as also the khajur (Phoenix dactylifera).

The glory of Tirupati Balajee is worldwide. Every year lakhs of people visit at Tirupati Dev, situated in south of India. One of the devotee from Zirapur, District Rajgarh of M.P. is Shri Om Prakash Mundra & his wife Shakuntala. When this couple reached to have darshan of Tirupati Balajee, a thought came in their mind, why not build the similar grand temple in Zirapur. It was a dream of Late Shri Kishanjee Mundra, resident of Baikunth and father of Shri O.P. Mundra to have such a grand temple at Zirapur also. Mundra couple then & their determined to construct the grand temple at Zirapur and returned to home town. Later they went with their other family members to Jhalariya Peeth situated at Didwana, (Rajasthan) and met Shree 1008 Shree Swami Shri Ghanshyamacharyajee Maharaj to detail about their dream. Swamijee immediately gave his consent for this great work. The starting was with the formation of Shree Shridhar Gyan Prasar Parmarthik Trust under the guidance of Swamijee Maharaj. Thereafter on 3 September 1998 at Zirapur, a town of Shri S.K. MLmdra with a small population of 25000 people, foundation of Balaji Temple was laid by Swami Shree Ghanshyamacharyajee Maharaj. The construction of temple took about 2 years. From 29 April to 4 May 2000 Pran Pratishtha Samaroh was conducted and Vyankatesh Lord Balajee temple was opened for public, and since then every day 2000–2500 devotees come here to have darshan and-get their wish fulfilled. [7]

A famous temple of maa durga situated 6 km from rajgarh city on the top of the hill. Raja Umath of Rajgarh had once worshiped the mother to protect people. due to which the mother herself appeared here. Here every year 1111 meters long Chunar is taken from rajmahal to the court of Mata Rani.[ citation needed ]

The temple of Shyamji (lord Vishnu) was built in the memory of the king Sangram Singh (Shyam Singh) by his wife Bhagyawati near parvati river in a village Kotra. During the 16-17th century, the king died in an encounter with a mughal soldier of Haji Wali. Temple contain many wall arts. The temple is protected by the state govt. [8]

Malwa is an Indian historical region of west-central India occupying a plateau of volcanic origin. Geologically, the Malwa Plateau generally refers to the volcanic upland north of the Vindhya Range. Politically and administratively, it is also synonymous with the former state of Madhya Bharat which was later merged with Madhya Pradesh, and presently the historical Malwa region includes districts of western Madhya Pradesh and parts of south-eastern Rajasthan, sometimes the definition of Malwa is extended to include the Nimar region south of the Vindhyas.

Shajapur District is a district of Madhya Pradesh state of central India. The town of Shajapur is the district headquarters.

Kanad is a town and a nagar parishad in Agar Malwa district in the Indian state of Madhya Pradesh. It comes under Kanad Parishad. It belongs to Ujjain Division. It is situated along the Agar–Sarangpur SH-41 highway. It is located 18 km (11 mi) towards east from the district headquarters of Agar Malwa, 83 km (52 mi) from Ujjain, 186 km (116 mi) from the state capital of Bhopal. 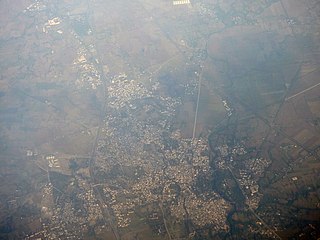 Sehore is a city and a municipality in Sehore district in the Indian state of Madhya Pradesh. It is the district headquarters of Sehore District and is located on the Bhopal-Indore highway, 38 km from Bhopal.

Dewas District is a district in the Indian state of Madhya Pradesh. The town of Dewas is the district headquarters.

Bhopal District is a district of Madhya Pradesh state in central India. The city of Bhopal serves as its administrative headquarters. The district is part of Bhopal Division.

Jirapur is a town and a nagar panchayat in Rajgarh district in the Indian state of Madhya Pradesh. Jirapur is a Tehsil and belongs to Bhopal Division. It is located 39 km towards west from district headquarters Rajgarh, 158 km from the state capital of Bhopal from the east.

Sarangpur is a city and Tehsil in Rajgarh district in the Indian state of Madhya Pradesh. It is situated at the bank of river Kali Sindh.

Satwas is a town and a Nagar Panchayat in Dewas district in the Indian state of Madhya Pradesh. Satwas is around 136.8Km from Dewas.

Narsinghgarh is a town and a municipality in Rajgarh district in the Indian state of Madhya Pradesh.

Harana is a village in Rajgarh district in the state of Madhya Pradesh in India. It belongs to Bhopal Division.

Gangahoni is a village in Biaora tehsil in Rajgarh district in the state of Madhya Pradesh, India.