The Syrmian Front (Serbo-Croatian : Srijemski front/Sremski front) was an Axis line of defense during World War II. It was established as part of the Eastern Front in late October 1944 in Syrmia and east Slavonia, northwest of Belgrade.

After the Yugoslav Partisans and the Red Army expelled the Germans from Belgrade in the Belgrade Offensive, the retreating Wehrmacht and the Croatian Armed Forces used fortifications to protect the withdrawal of German Army Group E from the Balkans. With help from their Soviet allies, the Partisans (by then recognized as the Yugoslav army), joined by Bulgarian and Italian forces, fought a difficult winter campaign and finally broke through the front on 12 April 1945.

After the Syrmian front was broken, occupied Yugoslavia was liberated. [3]

After the September advance through Romania and Bulgaria in October 1944, The Red Army, together with Yugoslav forces, took Belgrade (central communication node of the Balkans) in the Belgrade Offensive. Due to Yugoslav partisan activity, [4] the Yugoslav-Allied Operation Ratweek, and pressure from the Bulgarian Army, the Germans failed to prevent this while they awaited the redeployment of Army Group E troops from Greece. The Red Army decided to exploit this delay and continued to advance with the 3rd Ukrainian Front from Belgrade to south-west Hungary. The aim of the advance was to separate and protect their main attack in Hungary from attacks on the flank by Army Group E from the south.

From September 1944 to January 1945, Army Group E pushed its way through Macedonia, Kosovo, Sanjak, and Bosnia, and soon their sole available escape route was in a line between Sarajevo and Slavonski Brod. For this reason, it was of vital significance for the Germans to defend the zone around Slavonski Brod, which was threatened by the Soviet-Yugoslav advance through Syrmia. To prevent Army Group E from being cut off, the German South-East command prepared seven successive fortified defense lines between the Danube and Sava river from Ruma to Vinkovci. The Syrmian Front campaign consisted of Yugoslavian attempts to break through these lines of defense.

The Syrmian Front saw some of the most difficult fighting in Yugoslavia in World War II. It lasted for almost six months. As the bulk of the Red Army involved in the Belgrade operation continued their offensive in Hungary, the Yugoslav Army, accustomed to guerrilla warfare in the mountainous terrain of the Dinaric Alps, remained to fight the entrenched front line heavily contested by the Axis on the flat ground of the Pannonian plain. [5] Young men from Vojvodina and Central Serbia, many from freshly liberated regions, were drafted en masse and sent to the front, and the amount of training they received and their casualty levels remain in dispute. [6]

Although mostly stationary, the front moved several times, generally westward, as the Axis forces were pushed back. The fighting started east of Ruma and stabilized in January 1945 west of Šid after the town changed hands due to Axis counterattacks. In late March and early April 1945, Yugoslav Army units mounted a general offensive on all fronts. The Yugoslav First Army, commanded by Peko Dapčević, broke through German XXXIV Corps defenses in Syrmia on 12 April, quickly capturing the cities of Vukovar, Vinkovci, and Županja, and enabling further advances through Slavonia toward Slavonski Brod and Zagreb in the last month of the war.

The campaign can be divided into four distinct phases: 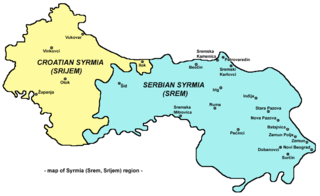 The Srem District is one of seven administrative districts of the autonomous province of Vojvodina, Serbia. It lies in the geographical regions of Syrmia and Mačva. According to the 2011 census results, it has a population of 312,278 inhabitants. The administrative center is the city of Sremska Mitrovica.

Šid is a town and municipality located in the Srem District of the autonomous province of Vojvodina, Serbia. It has a population of 14,893, while the municipality has 34,188 inhabitants.

Radoslav Čelnik, known as Vojvoda Rajko, was a Serb general (vojvoda) in the army of Jovan Nenad, the titular Serbian Emperor who held present-day Vojvodina, who after the death of Jovan Nenad (1527) took part of the army from Bačka to Syrmia and acceded into Ottoman service. Radoslav then ruled over Syrmia as "Duke of Syrmia (Srem)", initially as an Ottoman vassal (1527–1530) and then as a Habsburg vassal (1530–1532), until the region was conquered by the Ottomans. His residence and capital was in Slankamen (sr).

Nova Pazova is a settlement in Serbia. It is situated in the Stara Pazova municipality, in the region of Syrmia, in the autonomous province of Vojvodina. The settlement's population is currently 18,214, of which 17,421 are ethnic Serbs. 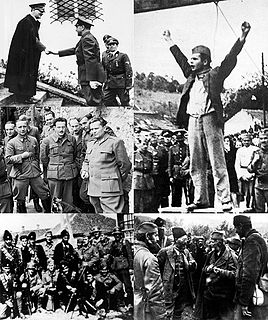 Military operations in World War II in Yugoslavia began on 6 April 1941, when the Kingdom of Yugoslavia was swiftly conquered by Axis forces and partitioned between Germany, Italy, Hungary, Bulgaria and client regimes. Subsequently, a guerrilla liberation war was fought against the Axis occupying forces and their locally established puppet regimes, including the fascist Independent State of Croatia and the Government of National Salvation in the German-occupied territory of Serbia, by the Communist-led republican Yugoslav Partisans. Simultaneously, a multi-side civil war was waged between the Yugoslav communist Partisans, the Serbian royalist Chetniks, the Croatian fascist Ustashe and Home Guard, Serbian Volunteer Corps and State Guard, as well as Slovene Home Guard troops.

The Battle of Lijevče Field was a battle fought between 30 March and 8 April 1945 between the Croatian Armed Forces and Chetnik forces on the Lijevče field near Banja Luka in what was then the Independent State of Croatia (NDH).

Konstantin "Kosta" Mušicki commanded the collaborationist Serbian Volunteer Corps during World War II. He was captured by the British Army at the end of the war, but was subsequently handed over to the Yugoslav authorities, who tried and executed him for war crimes. 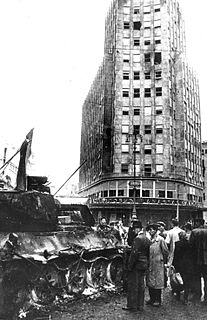 The Belgrade Offensive or the Belgrade Strategic Offensive Operation was a military operation in which Belgrade was liberated from the German Wehrmacht through the joint efforts of the Soviet Red Army, Yugoslav Partisans, and the Bulgarian Army. Soviet forces and local militias launched separate but loosely cooperative operations that undermined German control of Belgrade and ultimately forced a retreat. Martial planning was coordinated evenly among command leaders, and the operation was largely enabled through tactical cooperation between Josip Broz Tito and Joseph Stalin that began in September 1944. These martial provisions allowed Bulgarian forces to engage in operations throughout Yugoslav territory, which furthered tactical success while increasing diplomatic friction. 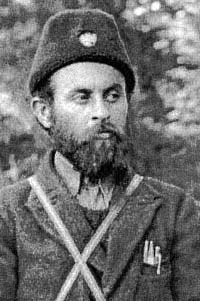 Pavle Đurišić was a Montenegrin Serb regular officer of the Royal Yugoslav Army who became a Chetnik commander (vojvoda) and led a significant proportion of the Chetniks in Montenegro during World War II. He distinguished himself and became one of the main commanders during the popular uprising against the Italians in Montenegro in July 1941, but later collaborated with the Italians in actions against the Communist-led Yugoslav Partisans. In 1943, his troops carried out several massacres against the Muslim population of Bosnia, Herzegovina and the Sandžak, and participated in the anti-Partisan Case White offensive alongside Italian forces. Đurišić was captured by the Germans in May 1943, escaped and was recaptured.

Banovci is a village in eastern Croatia, 7 kilometers away from the Serbian border. It is connected to surrounding areas by the D46 road and Zagreb-Belgrade Railway. The village is 116 km away from Belgrade (Serbia), 158 km from Sarajevo (Bosnia), 249 km from Zagreb (Croatia) and 257 km from Budapest (Hungary). 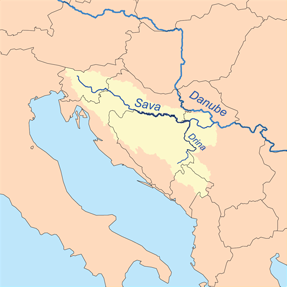 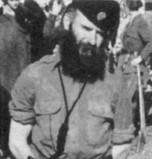 Vojislav Lukačević was a Serbian Chetnik commander in the Kingdom of Yugoslavia during World War II. At the outbreak of war, he held the rank of captain of the reserves in the Royal Yugoslav Army.

Milutin Đ. Nedić was a Army general and Chief of the General Staff of the Royal Yugoslav Army prior to the outbreak of World War II. He was replaced in late 1938, and later commanded the 2nd Army Group during the German-led Axis invasion of Yugoslavia of April 1941 during World War II. Nedić's command consisted of General Milan Rađenković's 1st Army, responsible for the area between the Danube and the Tisza, and the 2nd Army of General Dragoslav Miljković, responsible for the border from Slatina to the Danube. Nedić had no Army Group reserve, but the 2nd Army was to constitute a reserve of one infantry division deployed south of Slavonski Brod.

Rudolf Perhinek was Yugoslav military officer with the rank of Captain in the Royal Yugoslav Army who, soon after the Axis invasion of Yugoslavia, joined Chetniks of Dragoslav Mihailović. He was a member of the Supreme Command of Mihailović's Chetniks and received the rank of Major. Perhinek, also referred as Mihailović's right hand, organized Chetniks in Montenegro at the end of 1941. In period October 1941 — September 1943 he was a special envoy of Mihailovic's Chetnik staff for Montenegro who was also responsible for the intelligence service in Montenegro and Albania. Some sources describe him as an agent of Gestapo. For some time he was the Chief of Staff of Chetnik forces under command of Vojislav Lukačević. Perhinek was an ethnic Slovene. Yugoslav Government in Exile awarded him with Order of the Star of Karađorđe.

Ljubomir "Ljubo" Vuksanović was a Montenegrin lawyer who was the chairman of the National Administrative Council established by Germany in October 1943 in the German occupied territory of Montenegro and officially appointed on 10 November 1943. Vuksanović also held the position of Minister of Internal Affairs.

The Central National Committee of the Kingdom of Yugoslavia known also by its Yugoslav abbreviation CNK was an advisory body of the Yugoslav Army in the Fatherland established during the WWII in August 1941 by the group of political representatives of all prewar opposition parties.

The Rasina Corps was a corps of the Yugoslav Army in the Homeland (JVuO) that operated in the region of Kruševac county of Axis occupied Kingdom of Yugoslavia under command of Dragutin Keserović. On 11 May 1944 the Rasina Corps was merged with Toplica Corps to establish Rasina-Toplica Corps Group which was one of elite Chetnik units which would receive the biggest burdain of defence from advancing Tito's communist forces and together with Red Army liberated Kruševac from Axis occupation.

The 3rd Army of the Yugoslav Partisans was a Partisan army that operated in Yugoslavia during the last months of the Second World War.