Axis naval forces gave a high priority to disrupting Allied trade in the Indian Ocean. Initial anti-shipping measures of unrestricted submarine warfare and covert raiding ships expanded to include airstrikes by aircraft carriers and raids by cruisers of the Imperial Japanese Navy. A Kriegsmarine Monsun Gruppe of U-boats operated from the eastern Indian Ocean after the Persian Corridor became an important military supply route to the Soviet Union.

Early focus was Allied neutralisation and capture of Regia Marina African naval bases, followed by invasions of Iraq in April and Iran in August, to displace governments friendly to the Axis powers. Later Allied focus was on destruction of Kriegsmarine commerce raiders and moving troops to defend against anticipated Japanese expansion into south-east Asia.

Japanese submarine cruisers began patrolling the Indian Ocean during the Dutch East Indies campaign. Following the attack on Pearl Harbor, the Kido Butai fast carrier task force raided Darwin, Australia to cover the invasion of Timor and raided Ceylon to cover transport of Japanese troops to Rangoon. Kriegsmarine merchant raiders were less able to avoid Allied patrols; but the battle of the Atlantic spilled over into the Indian Ocean around Cape Agulhas as German Type IX submarines began patrolling the east coast of Africa.

Axis submarine patrols of Indian Ocean trade routes were expanded with establishment of a Kriegsmarine base in Penang as Allied anti-submarine patrols became increasingly effective in the Atlantic. Allied submarines and aircraft began patrolling the Strait of Malacca and Andaman Sea to intercept shipping supporting Japanese forces in Burma.

Use of Ultra intelligence information increased successful interceptions by Allied submarines and reduced Axis resupply opportunities in the Indian Ocean. Surrender of the Regia Marina and destruction of Kriegsmarine battleships made Royal Navy aircraft carriers available for raids of the Andaman Sea.

Allied focus was on amphibious operations along the Burma coast of the Andaman Sea. Axis submarine operations were restricted by fuel shortage and maintenance difficulties. 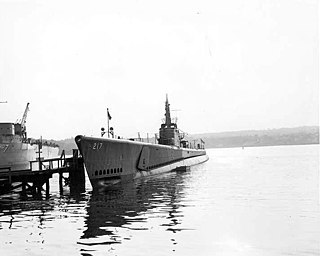 USS Guardfish (SS-217), a Gato-class submarine, was the first ship of the United States Navy to be named for the guardfish.

USS Paddle (SS-263), a Gato-class submarine, was a ship of the United States Navy named for the paddle.

USS Pogy (SS-266), a Gato-class submarine, was the first ship of the United States Navy to be named for the pogy, or menhaden.

USS Puffer (SS-268), a Gato-class submarine, was the first ship of the United States Navy to be named for the puffer.

Albrecht Brandi was a German U-boat commander in Nazi Germany's Kriegsmarine during World War II. Together with Wolfgang Lüth, he was the only Kriegsmarine sailor who was awarded with the Knight's Cross of the Iron Cross with Oak Leaves, Swords and Diamonds. The Knight's Cross, and its variants were the highest awards in the military and paramilitary forces of Nazi Germany during World War II. Brandi is credited with the sinking of eight merchant ships for a total of 25,879 gross register tons (GRT), one auxiliary warship of 810 GRT, and three warships of 5,000 long tons.

HMS Paladin was a P-class destroyer of the Royal Navy that served in the Second World War. She was built by John Brown and Co. Ltd., Clydebank. She saw action in the Mediterranean and Far East. After the war she was converted into a type 16 frigate and was eventually scrapped in 1962.

HMS Sportsman was a third-batch S-class submarine built for the Royal Navy during World War II. Completed in 1942, she spent most of the war serving in the Mediterranean Sea. After an initial patrol off Norway, she sank the heavy transport Général Bonaparte in the Mediterranean in 1943 and missed a French oil tanker. She was heavily damaged after a mistaken attack by an Allied bomber, and was sent east after repairs to participate in operations in the Black Sea. After the operation was cancelled, Sportsman patrolled the Aegean Sea, sending several Greek and German ships to the bottom. She sank the German transport SS Petrella in early 1944 despite it being clearly marked as a prisoner-of-war ship, killing 2,670 out of 3,173 Italians aboard. Sportsman sank several more ships, and suffered minor damage when she was detected and sighted while attempting to attack a convoy.

Convoy SL 125 was the 125th of the numbered series of World War II SL convoys of merchant ships from Sierra Leone to Liverpool. Ships carrying commodities bound to the British Isles from South America, Africa, and the Indian Ocean travelled independently to Freetown, Sierra Leone, to be convoyed for the last leg of their voyage. Thirty-seven merchant ships departed Freetown on 16 October 1942 and were joined at sea by five more.

The Gruppe Monsun or Monsoon Group was a force of German U-boats (submarines) that operated in the Pacific and Indian Oceans during World War II. Although similar naming conventions were used for temporary groupings of submarines in the Atlantic, the longer duration of Indian Ocean patrols caused the name to be permanently associated with the relatively small number of U-boats operating out of Penang. After 1944, the U-boats of the Monsun Gruppe were operationally placed under the authority of the Southeast Asia U-boat Region. 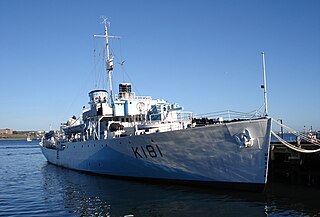 Western Local Escort Force (WLEF) referred to the organization of anti-submarine escorts for World War II trade convoys from North American port cities to the Western Ocean Meeting Point near Newfoundland where ships of the Mid-Ocean Escort Force (MOEF) assumed responsibility for safely delivering the convoys to the British Isles. 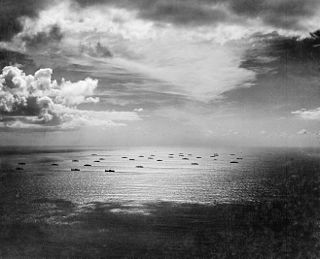 The UG convoys were a series of east-bound trans-Atlantic convoys from the United States to Gibraltar carrying food, ammunition, and military hardware to the United States Army in North Africa and southern Europe during World War II. These convoys assembled in Hampton Roads near the mouth of Chesapeake Bay and terminated in various North African locations as Axis forces retreated from 1942 through 1945.

The CU convoys were a World War II series of fast trans-Atlantic convoys to the British Isles. The earliest convoys of the series were tankers sailing directly from petroleum refineries at Curaçao to the United Kingdom. Most convoys of the series assembled in New York City and included fast freighters and troopships, with tankers arriving from Aruba via TAG convoys to Guantánamo Bay and GN convoys from Guantánamo to New York.

HMS Tynedale was a Hunt-class destroyer of the first subgroup which served during the Second World War. She was sunk by the U-593 on 12 December 1943. 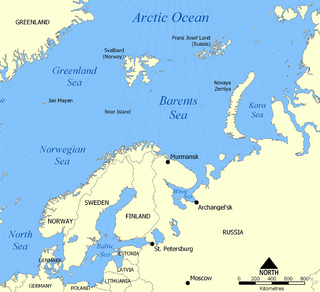 The Arctic Circle defining the "midnight sun" encompasses the Atlantic Ocean from the northern edge of Iceland to the Bering Strait in the Pacific Ocean. Military activity in this area between 1939 and 1945 is often considered part of the Battle of the Atlantic or of the European Theatre of World War II. Pre-war navigation focused on fishing and the international ore-trade from Narvik and Petsamo. Soviet settlements along the coast and rivers of the Barents Sea and Kara Sea relied upon summer coastal shipping for supplies from railheads at Arkhangelsk and Murmansk. The Soviet Union extended the Northern Sea Route past the Taymyr Peninsula to the Bering Strait in 1935.

Aikoku Maru (愛国丸) was an armed merchant cruiser of the Imperial Japanese Navy in World War II. The ship entered service in 1940, the ship was later converted to an ammunition ship. She was destroyed in February 1944. 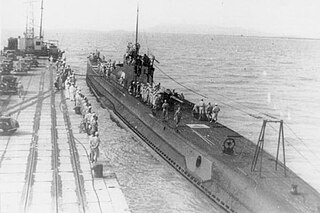 The 8th Submarine Squadron of the Imperial Japanese Navy was based at Swettenham Pier, Penang, Malaya, until late 1944 during World War II. Its mission was to disrupt Allied supply lines in aid of Nazi Germany.

Convoy HG 53 was the 53rd of the numbered series of World War II HG convoys of Homeward bound merchant ships from Gibraltar to Liverpool. Convoy HG 53 lost nine ships during a coordinated attack in February 1941. HG 53 was one of the few Atlantic convoys to have ships sunk by submarines, by aircraft, and by surface ships. 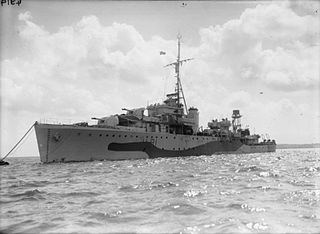