Taxation in Hungary is levied by both national and local governments. Tax revenue in Hungary stood at 38.4% of GDP in 2017. [2] The most important revenue sources include the income tax, Social security, corporate tax and the value added tax, which are all applied at the national level. Among the total tax income the ratio of local taxes is solely 5% while the EU average is 30%. [3]

Income tax in Hungary is levied at a flat rate of 15%. [4] A tax allowance is given through a family allowance (Hungarian : családi adókedvezmény), which is equal to the allowance multiplied by the number of "beneficiary dependent children". For one or two children the allowance is HUF 62,500 per child, for three or more HUF 206,250 per child. [5] The allowance can be split between spouses or life partners.

The standard rate of value added tax is 27% as of January 2012 — the highest in the European Union. [6] There is a reduced rate of 5% for most medicines and some food products, and a reduced rate of 18% for internet connections, restaurants and catering, dairy and bakery products, hotel services and admission to short-term open-air events. [7]

In January 2017, corporate tax was unified at a rate of 9% — the lowest in the European Union. [8] Dividends received are not subject to taxation, provided that are not received from a Controlled Foreign Company (CFC). Capital gains are included in corporate tax, with certain exemptions. [9]

After the Ottoman conquest of central parts of Hungary, the most common tax was the Ottoman administration's levy on Christians the dhimmi. Under Austro-Hungarian rule, taxes were mostly levied by Austria, but Hungary was later given more financial autonomy in the Austro-Hungarian Compromise of 1867. [12] In 1988, liberalization of the Soviet-influenced Kádár government introduced tax reform, establishing a comprehensive tax system of central and local taxes, consisting mainly of a personal income tax, a corporate income tax and a value added tax. [13] 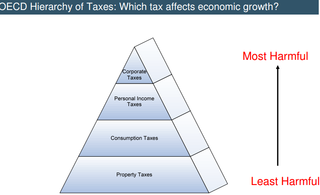 Taxation in the Republic of Ireland in 2017 came from Personal Income taxes, and Consumption taxes, being VAT and Excise and Customs duties. Corporation taxes represents most of the balance, but Ireland's Corporate Tax System (CT) is a central part of Ireland's economic model. Ireland summarises its taxation policy using the OECD's Hierarchy of Taxes pyramid, which emphasises high corporate tax rates as the most harmful types of taxes where economic growth is the objective. The balance of Ireland's taxes are Property taxes and Capital taxes.

Taxation in the Netherlands is defined by the income tax, the wage withholding tax, the value added tax and the corporate tax.

This is a list of the maximum potential tax rates around Europe for certain income brackets. It is focused on three types of taxes: corporate, individual, and value added taxes (VAT). It is not intended to represent the true tax burden to either the corporation or the individual in the listed country.

Due to the absence of the tax code in Argentina, the tax regulation takes place in accordance with separate laws, which, in turn, are supplemented by provisions of normative acts adopted by the executive authorities. The powers of the executive authority include levying a tax on profits, property and added value throughout the national territory. In Argentina, the tax policy is implemented by the Federal Administration of Public Revenue, which is subordinate to the Ministry of Economy. The Federal Administration of Public Revenues (AFIP) is an independent service, which includes: the General Tax Administration, the General Customs Office and the General Directorate for Social Security. AFIP establishes the relevant legal norms for the calculation, payment and administration of taxes:

In Austria, taxes are levied by the state and the tax revenue in Austria was 42.7% of GDP in 2016 according to the World Bank The most important revenue source for the government is the income tax, corporate tax, social security contributions, value added tax and tax on goods and services. Another important taxes are municipal tax, real-estate tax, vehicle insurance tax, property tax, tobacco tax. There exists no property tax. The gift tax and inheritance tax were cancelled in 2008. Furthermore, self-employed persons can use a tax allowance of €3,900 per year. The tax period is set for a calendar year. However, there is a possibility of having an exception but a permission of the tax authority must be received. The Financial Secrecy Index ranks Austria as the 35th safest tax haven in the world.

Taxation in Norway is levied by the central government, the county municipality (fylkeskommune) and the municipality (kommune). In 2012 the total tax revenue was 42.2% of the gross domestic product (GDP). Many direct and indirect taxes exist. The most important taxes – in terms of revenue – are VAT, income tax in the petroleum sector, employers' social security contributions and tax on "ordinary income" for persons. Most direct taxes are collected by the Norwegian Tax Administration (Skatteetaten) and most indirect taxes are collected by the Norwegian Customs and Excise Authorities.

Taxes in Germany are levied by the federal government, the states (Länder) as well as the municipalities (Städte/Gemeinden). Many direct and indirect taxes exist in Germany; income tax and VAT are the most significant. 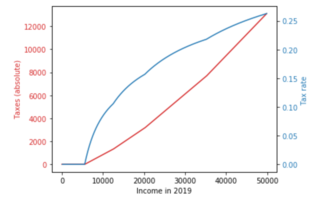 Taxes in Spain are levied by national (central), regional and local governments. Tax revenue in Spain stood at 36.3% of GDP in 2013. A wide range of taxes are levied on different sources, the most important ones being income tax, social security contributions, corporate tax, value added tax; some of them are applied at national level and others at national and regional levels. Most national and regional taxes are collected by the Agencia Estatal de Administración Tributaria which is the bureau responsible for collecting taxes at the national level. Other minor taxes like property transfer tax (regional), real estate property tax (local), road tax (local) are collected directly by regional or local administrations. Four historical territories or foral provinces collect all national and regional taxes themselves and subsequently transfer the portion due to central Government after two negotiations called Concierto and the Convenio. The tax year in Spain follows the calendar year. The tax collection method depends on the tax; some of them are collected by self-assessment, but others follow a system of pay-as-you-earn tax with monthly withholdings that follow a self-assessment at the end of the term.

Taxation in Estonia consists of state and local taxes. A relatively high proportion of government revenue comes from consumption taxes whilst revenue from capital taxes is one of the lowest in the European Union.

Taxes in Portugal are levied by both the national and regional governments of Portugal. Tax revenue in Portugal stood at 34.9% of GDP in 2018. The most important revenue sources include the income tax, social security contributions, corporate tax and the value added tax, which are all applied at the national level.

Czech Republic's current tax system was put into administration on 1 January 1993. Since then, an updated VAT act was introduced on 1 May 2004 when Czech Republic joined the EU and the act had to correspond to EU law. In 2008, the administration also introduced Energy Taxation. Changes to tax laws are quite frequent and common in the Czech Republic due to a dynamic economy. Highest levels of revenue are generated from income tax, social security contributions, value-added tax and the corporate tax. In 2015, total revenue stood at CZK 670.216 billion which was 36.3% of GDP. The tax quota of the Czech Republic is lower than the EU average. Compared to the averages of the OECD countries, revenues generated from taxes on social security contributions, corporate income and gains and value added taxes account for higher proportions of total taxation revenue. Personal income tax lays on the other end of the spectrum where the revenue is proportionally much lower than the OECD average. Taxes on property also account for lower levels of revenue.

Taxes in Poland are levied by both the central and provincial governments. Tax revenue in Poland is 33.9% of the country's GDP in 2017. The most important revenue sources include the income tax, Social Security, corporate tax and the value added tax, which are all applied on the national level.

In Latvia, taxes are levied by both national and local governments. Tax revenue stood at 28.1% of the GDP in 2013. The most important revenue sources include income tax, social security, corporate tax and value added tax, which are all applied on the national level. Income taxes are levied at a flat rate of 23% on all income. A long range of tax allowances is given including a standard allowance of €900 per year and €1980 per year for every dependent.

Taxes in Cyprus are levied by both the central and local governments. Tax revenue stood at 39.2% of GDP in 2012. The most important revenue sources are the income tax, social security, value-added tax and corporate tax, and are all collected by the central government.